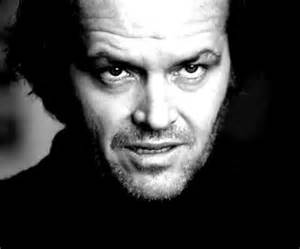 "In this industry, there are only two ways up the ladder. Rung by rung or claw your way to the top. It's sure been tough on my nails."
~  Jack Nicholson

Jack Nicholson may be the actor most associated with the reinvigoration of American cinema in the 1970’s, sometimes known as the American Renaissance. In the wake of the French new wave, or Nouvelle Vague,  American cinema re-imagined itself with new honesty and adventurism, driven by a flood of film brats, graduates of the many film schools that had sprung up during the Baby Boom and Counterculture years of the ‘60s. Jack fell in with Roger Corman’s company of B picture rogues and starred in a feature in 1958, the exploitative and unremarkable Cry Baby Killer.  From such inauspicious beginnings he eventually became one of the titans of world cinema with a shit-eating trademark grin that would light up the screen for decades.

Nicholson fared so badly over the next decade that he decided to abandon any ambitions as an actor and concentrate of writing and directing. Apart from a few worthwhile, offbeat and existentialist westerns for Monte Hellman, Ride In The Whirlwind and The Shooting,  he found little scope for his idiosyncratic and edgy persona, until he fell in with Bob Rafelson, Bert Schnieder and the group that would comprise the groundbreaking BBS Productions. Jack’s big break came on the back of the success with a film he wrote and Rafelson directed, the oddball Monkee feature Head,  as it bankrolled BBS and their first big project the game changing, Easy Rider.    When Rip Torn pulled out of the role of George, the stoner lawyer, Nicholson was asked to step in and reluctantly accepted, the role promptly earned him an Academy Award nomination and he never suffered from a lack of good roles again.

Rafelson immediately pressed him into service with the brilliant if bleak Five Easy Pieces, and would again offer him keynote roles in The King of Marvin Gardens  and in his gritty re-make of the Film Noir  classic, The Postman Always Rings Twice.  Other directors noticed Nicholson’s edgy persona and how perfectly it matched the neuroses of the Vietnam-Watergate era, and Mike Nichols cast him in Carnal Knowledge  to great advantage as did Hal Ashby in The Last Detail.  Jack hooked up with fellow iconoclast Roman Polanski to deliver a signature performance as Jake Gittes in the masterful Robert Towne scripted Chinatown.  The Academy Award that should have been his for Chinatown was made up for in 1976 with acknowledgement of his blistering performance in Milos Forman’s One Flew Over The Cuckoo’s Nest,  a landmark in American cinema.

International cinema embraced him too, via his superb performance in maestro Antonioni’s existentialist masterpiece The Passenger,   opposite one time Brando leading lady Maria Schnieder. Jack was now the undisputed heavyweight champion of acting, and with his pick of the stall he chose to work with Arthur Penn and Marlon Brando on the offbeat western The Missouri Breaks,  and with Elia Kazan and Robert De Niro on the moody and excellent, The Last Tycoon.  He crowned this second phase of more ‘artistic’ roles with the unforgettable role that probably cemented his psycho-comic persona in the minds of the public, Jack Torrance in Stanley Kubrick’s gimlet-eyed thriller, The Shining. Here’s Johnny indeed.

The first half of the eighties was peppered with interesting and commercially successful films, with Warren Beatty’s very fine Reds  as highlight, as was Tony Richardson’s visceral, The Border,  after which Jack settled into a run of more bland and commercial fare, culminating in his scenery chewing turn as the Joker in the Tim Burton Blockbuster, Batman. He continued to alternate between interesting roles and large scale productions, giving a reminder of his range and power in Danny De Vito’s Hoffa,  scripted by David Mamet., and in his scene stealing turn in Rob Reiner's A Few Good Men, "You can't handle the truth."  A pair of brilliant and muscular performances in the Sean Penn directed films, The Crossing Guard  and The Pledge  were highlights in the latter part of his career as was his part in the Martin Scorsese directed The Departed.

Jack Nicholson was the perfect man for the ‘70s anti-hero, his masculinity a different kind from the particular machismo found in other alpha male actors like Brando and De Niro. Jacks’ sharp wit and irreverence were his ticket to notoriety, his grin and lasciviousness an irresistible attraction to the ladies, he represented a new man for a new Hollywood and etched himself a permanent place in the pantheon of the greats.