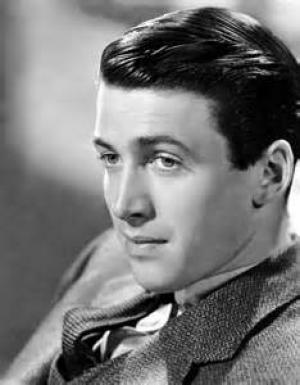 “He had the ability to talk naturally. He knew that in conversations people do often interrupt one another and it's not always so easy to get a thought out. It took a little time for the sound men to get used to him, but he had an enormous impact. And then, some years later, Marlon came out and did the same thing all over again, but what people forget is that Jimmy did it first.”
~ Cary Grant

His laconic, folksy voice became fodder for comic impressionists everywhere, but it was an indication of the easy going charm and likeability that made him one of the greatest, and most unlikely, movie stars of all time.  Jimmy Stewart came through the same system as his friend Henry Fonda, sharing digs with him on Broadway in the early 1930’s before following Hank to Hollywood later in the decade. It was Fonda’s ex-wife, Margaret Sullavan, who gave Jimmy a leg up in Los Angeles, and it was rumoured a leg over, as she insisted he be cast in Next Time We Love  in 1936, but it was Frank Capra who made him a star.

Robert Riskin, the socially conscious writer who gave Capra his best scripts, wrote a part in You Can’t Take it With You  that Capra could not envisage for a Clark Gable or a Gary Cooper, but he saw in Stewart’s persona an honesty and integrity that would be ideal for the character. The stage derived property (from a Kaufman and Hart play) suited Stewart perfectly and when Gary Cooper pulled out of Mr. Smith Goes to Washington,  Capra’s next film, Stewart capably stepped up and was rewarded with his first Best Actor Academy Award nomination. Jimmy consolidated with a comic western called Destry Rides Again,  with Marlene Dietrich, which was a huge hit with an appreciative public (as he was with the appreciative actress) about to be dragged into WWII.

Prior to America’s entry into the war Jimmy made the brilliant anti-Nazi film The Mortal Storm  for the veteran director Frank Borzage, and the fine romance The Shop Around the Corner  for the master Ernst Lubitsch, and in both films he played opposite his old friend Margaret Sullavan. Jimmy won the Academy Award in George Cukor’s masterpiece The Philadelphia Story  with Cary Grant and Katherine Hepburn and when America belatedly entered the fight against fascism Stewart and his friend Fonda signed up for military service. Stewart enlisted in the Air Force as a private and rose to the rank of Colonel in 4 years, flying many bombing missions over Germany.

Jimmy came back from the war and set about doing what many stars did, setting up independently of the major studios. As American cinema was about to embrace a new type of male in the aftermath of the war, like Brando and Clift, Stewart starred in a series of flops that sent his career into a commercial lull. Two of those flops were important nonetheless, the last film he made with Capra - the Xmas perennial and Jimmy’s favourite role, George Bailey in It’s a Wonderful Life . The other was the first film of four he made with Alfred Hitchcock (after Cary Grant turned down the role because of the homosexual overtones), the morbid thriller Rope.

Jimmy then made another important career decision when he decided to team up with Anthony Mann in a series of lean, superb westerns with Winchester ‘73,  (after Fritz Lang declined)  then with Bend of the River,  The Naked Spur,  The Far Country  and The Man from Laramie.  Stewart became the biggest movie star in the world in 1955 after he’d made his second film for Hitch, the masterful Rear Window,  with the lovely Grace Kelly as his co-star. Hitch and Jimmy made two more films together, the fine re-make of an earlier Hitchcock, The Man Who Knew Too Much  and the film lately voted the best ever, Vertigo.  Hitchcock blamed the relative commercial failure of Vertigo  on Stewart’s age, and cast the younger looking, but older, Cary Grant in the next film in a role Jimmy wanted in North by Northwest.  Jimmy instead provided one of his finest dramatic performances in Otto Preminger’s edgy and controversial Anatomy of a Murder.

Jimmy then teamed up with the irascible old bastard John Ford for three westerns and duly made a dark hued masterpiece, The Man Who Shot Liberty Valance,  co-starring John Wayne. The sixties were uneven in terms of quality output, he shared a lesser, but effective partnership with the under-rated Andrew V. McLaglan in a couple of worthwhile films like Shenandoah and The Rare Breed   but also made a fine film for Robert Aldrich in Flight of the Phoenix.  James Stewart topped a stellar career with a couple of fun projects with his old pal Henry Fonda, the comedy westerns Firecreek  and The Cheyenne Social Club,  before providing a small but heartfelt coda in John Wayne’s last film, Don Siegel’s The Shootist.

James Stewart rose to the top of the tree not playing dashing heroes, or charismatic lovers, or dastardly villains, he made it by becoming the quintessential cinematic representation of the American ‘everyman’. Unlike his pal Henry Fonda, whose private life could not match the humanity and dignity of his screen persona (which allowed layers and dimensions Jimmy did not have) Stewart was the perfectly respectable man on screen and off. His consummate and deceptive skill allowed him to span the decades as fads and changes saw off many of his contemporaries.

James Stewart may be remembered as a laconic everyman, but occasionally he proved he had an edge and depth that could surprise, but mostly he’ll be recalled as the decent guy you could trust. Loved by all, his effortless facility graced dozens of classic films and lives on in the minds of movie lovers everywhere.