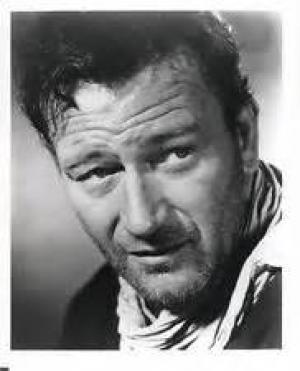 Duke leads with his right

“I stick to simple themes. Love. Hate. No nuances. I stay away from psychoanalyst's couch scenes. Couches are good for one thing.”
~ John Wayne

Marion Mitchell Morrison, known to his friends as ‘Duke’ and to the cinema going word as John Wayne, embodied the fierce self-mythologising extant in the American psyche in the 20th century and for many he came to symbolise a certain kind of America. The handsome and athletic actor was noticed by director John Ford at the tail end of the silent era and soon found he was doing bit parts and odd jobs for Ford, or cowboy star Tom Mix. His first decent part was given to him by Raoul Walsh, on Ford’s suggestion after Gary Cooper became unavailable, being the lead in the sprawling and costly epic The Big Trail,  in 1930, but technical requirements meant many cinemas were not equipped to show it in widescreen and it failed to turn a profit. The failure left Wayne to languish for the rest of the decade in B grade westerns, but the film did facilitate a life-long friendship with one of the support extras, Ward Bond, a friendship that would have major repercussions in terms of Wayne's politics.

In 1939 John Ford, then one the most famous and successful directors in America, having made many commercial hits and also having won a Best Director Oscar in 1935 for The Informer,  returned to the western genre with the immortal Stagecoach.  Ford cast Wayne as the Ringo Kid, and in a famous, swooping shot where the Kid comes into focus on a dusty road, a star was born, and an image permanently burnished into world cinematic memory.  Raoul Walsh then gave him his next quality picture Dark Command,  and Ford again with the excellent The Long Voyage Home,  a film that stretched Duke’s acting ability more than most. Cecil B. De Mille made the epic Reap the Wild Wind  with Wayne in 1942, an indication of his new found A-list status, but with the arrival of the war he mostly languished in undistinguished films by journeyman directors.

The war caused Wayne some problems in that he was one of the few high profile stars to not sign up, an issue that led to some unsavoury bullying from Ford on the seminal war film They Were Expendable.  That 1945 film was the only quality project he worked on until he teamed up with Howard Hawks for the mighty Red River,  which led Ford to exclaim upon seeing it, “I didn’t know the son-of-a-bitch could act”!  Duke’s association with Ford then entered its most fertile period as they made the outstanding Cavalry Trilogy, comprising Fort Apache  (with Henry Fonda), She Wore a Yellow Ribbon  and Rio Grande,  as well as the beautiful allegory 3 Godfathers  and the charming Irish conceit The Quiet Man.

At this point John Wayne was the biggest movie star in the world, and his persona seemed carved in the same rock as Mount Rushmore, and for the rest of his career he barely deviated from that image. The only work of consequence was extracted from him via his work with talented directors, Ford and Hawks mostly, but also Henry Hathaway, William Wellman, Otto Preminger, John Sturges and (like his pals Fonda and Jimmy Stewart) Andrew V. McLaglan. Wayne managed two of his greatest efforts towards the end of the ‘50s, Ford’s stunning The Searchers,  and Hawks’ right wing riposte to High Noon,  the very fine Rio Bravo. Ford again provided an A-list role for Duke with the dark and elegiac The Man Who Shot Liberty Valance, opposite Jimmy Stewart.

John Wayne, mythic movie star, became the driving idea behind choosing projects for the remainder of Duke’s life, with some bizarre and tasteless choices creeping in, particularly the ill-judged fascist militarism of the egregious The Green Berets,  but he was solid enough in Hathaway’s True Grit to warrant a ‘lifetime’ Oscar for his portrayal of the old lawman, and Don Siegal did the right thing in sending him off in the most appropriate way possible with the excellent The Shootist,  in 1976, nearly 40 years after the Ringo Kid hailed down that stagecoach and Ford captured that wonderful shot for all time.

Unlike some of his peers, John Wayne made an inordinate number of poor to bad films, but his very best work stands with the greats. In many ways he was the archetypal movie star, not actor, but that would lazy claim would devalue the level of art he, albeit inconsistently, achieved. For all the bad films, he still made more good to great films than most, and at his best he achieved a naturalistic grace that was winning and believable, and long before the ‘Method’ came along and naturalism became the style du jour.

* Any assessment of the impact of John Wayne cannot fail to include an appraisal of the politics associated with his activities. Wayne’s humour and good natured, easy screen persona made him an ideal embodiment of the puerile ‘white hat/black hat’ idea of American expansionism in an era where American might dominated world politics. For better or worse Wayne’s image was entwined with Wayne the man, and sadly, in some ways they lined up completely. Jean-Luc Godard mentioned the dichotomy when he said, “How can I hate John Wayne … and yet love him tenderly when he picks up Natalie Wood in his arms in the last reel of The Searchers?”

Wayne was a former supporter of FDR who took a swing to the right during the war years, where as a right wing activist he helped form the quasi-fascist Motion Picture Alliance for the Preservation of American Ideals. The organisation was set up by rabid anti-communists like Walt Disney and Ward Bond and immediately set about creating a climate of fear by questioning the patriotism of people who disagreed with their limited view of what being an American entailed. The group cleared the way for HUAC to come to Hollywood and investigate so-called Red influence, and marched in locked goose-step with that appalling institution in naming actors and writers they suspected of having a ‘pinko’ tinge. They ruined careers and lives and completely failed to provide any evidence of communist influence in Hollywood.

John Wayne may have been a decent, honest man but his political legacy makes him look like he was a misguided simpleton, and sadly he remained oblivious to the damage it caused. His politics during the Blacklist/McCarthy era was part of a time when many in his industry have no reason to be proud, but his best screen creations are amongst the most enduring ever committed to celluloid. Let's remember him that way.