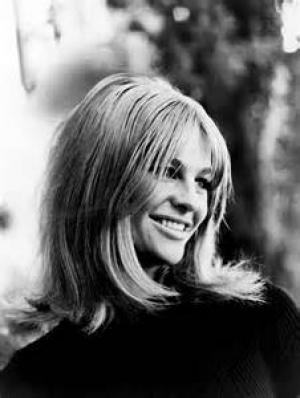 Julie Christie is an English rose who came out of the ‘kitchen sink’ realism of the British early ‘60’s period, became the embodiment of the London ‘swinging sixties’ and also came to represent the best of the American Renaissance period of the 1970’s.  She started in British television in the late 1950’s before John Schlesinger gave her a big break in his biting satire, Billy Liar,  and he would repeat the dose by starring her in the key 60's tome Darling,  opposite Dirk Bogarde, which won her a Best Actress Academy Award. If that was not enough Schlesinger cast her again, this time opposite Terrence Stamp, Alan Bates and Peter Finch in his adaptation of Thomas Hardy’s Far From The Madding Crowd  two years later. In the interim her modern girl persona and classical good looks saw her snapped up by John Ford, for his Sean O’Casey bio-pic Young Cassidy,  (Ford grew ill and Jack Cardiff took over and took full directing credit) and by Nouvelle Vague icon Françoise Truffaut for his lean sci-fi, Fahrenheit 451.

One of the first to realise she could play well in period pieces was the old master David Lean, who cast her as Lara in his 1965 epic Doctor Zhivago,  and the resultant smash hit became her ticket to mainstream stardom. Ray Davies (The Kinks) wrote his Summer of Love classic Waterloo Sunset in 1967 and immortalised Christie and Stamp in the line “Terry meets Julie, Waterloo station, every Friday night”,  and Richard Lester's Swinging Sixties touchstone Petulia  inextricably linked Christie to the 1968 Zeitgeist. Hollywood exile Joseph Losey provided her next classic role, as the lustful aristocrat attracted to the earthy farmer played by Alan Bates in The Go-Between,  before Christie followed the likes of Schelsinger to America to star for Robert Altman in his remarkable anti-western McCabe and Mrs Miller,  opposite Warren Beatty.

Christie settled into a fertile period that coincided with a resurgent US film industry and found many worthy parts in excellent films, like Hal Ashby’s acerbic and satirical Shampoo,  again with Beatty (the pair were a couple during this period) and in Beatty’s own Heaven Can Wait.  She also made Don’t Look Now  during that phase, a British made gem from iconoclast Nicholas Roeg, (her cinematographer on Far From The Madding Crowd and Petulia) , filmed in Venice opposite Donald Sutherland, before Altman gave her a cameo as herself in Nashville,  giving rise to Henry Gibson’s deathless aside about Julie Christie and the New Christy Minstrels!

"Most of the time I spent in America, I was having a love affair with some American or other. I was just passing through but stayed because of these chaps." ~ Julie Christie

Christie was born in India, during the era of the British Raj, and she returned to this period in the excellent early ‘80s Merchant-Ivory production Heat and Dust,  an epic in a time when she was mostly finding smaller and more interesting roles as she aged gracefully. Sidney Lumet gave her a fine supporting role in his politically charged Power,  opposite Gene Hackman, and she rounded out the decade by making the fine Irish drama Fools of Fortune,  about the fight for Irish independence post WWI.

Since the 1990’s she has mostly played supporting roles in big films or played more interesting women in independent films. Kenneth Brannagh cast her as Gertrude in his big screen adaptation of Hamlet  in 1996 and Altman alumnus Alan Rudolph gave her a defining late period role in his well considered Afterglow.  She made appearances in the plastic epic Troy,  in the stylish and well crafted Harry Potter and the Prisoner of Azkaban, and in Hal Hartley’s No Such Thing. Sarah Polley cast her in Away From Her  in 2006, and Christie enjoyed one of the finest roles in her illustrious career as Fiona, a Canadian woman starting to show signs of Alzheimer’s Disease.

Julie Christie’s remarkable career aligned almost completely with the Second Wave feminism that took hold on the campuses of the Western World in the 1960’s and changed perceptions and mores completely. Christie became the embodiment of the bright, independent woman who could take on the patriarchal society and thrive on her own terms, a beacon for generations of girls who came in the wake of politically savvy actresses like her and Jane Fonda. Christie’s natural beauty and ethereal presence meant she could lend a vulnerability and brittleness to her characters, adding layers of mystery and intrigue to create rounded and memorable performances on a regular basis.

Julie Christie's rapid rise to fame and fortune was underpinned by an earthy awareness of the ambiguity and superficiality of the fame game, but her nose for a good director helped her find and star in many of the finest films of the second half of the 20th century, and her best roles will live on in cinema history for many a year. Her beauty, wit and charm, and ability to avoid obvious and clichéd choices means her legacy has an integrity and depth that many of her contemporaries could only dream about.