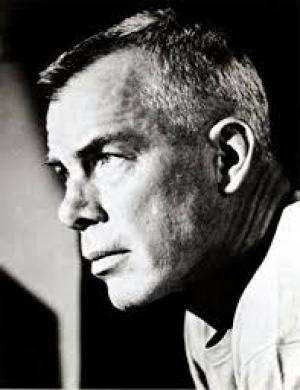 "When I play these roles of vicious men I do things you shouldn't do and I make you see that you shouldn't do them. I played a lot of what I hate, now I like to play parts which I love. I can play bigots, etc, parts no one else will. I am not fascinated by death any more: there is lots of anti-violence in my heart, and after committing murder it was hard to find peace. Acting is a search for communication... " ~ Lee Marvin

Lee Marvin was a war hero marine, distinguishing himself in the Pacific theatre in WWII before falling into acting after taking a job as a plumber in an altogether different theatre. There he was bitten by the acting bug and like many after the war was eventually drawn to Hollywood, making a reputation in war films as an advisor as well as a tough guy actor. Marvin languished in support roles for most of the 1950’s, making a mark in Fritz Lang’s The Big Heat as the odious villain who throws scalding coffee in Gloria Graeme’s face, and also as a bikie in László Benedek’s The Wild One, opposite Marlon Brando.

Marvin made a crucial connection with director Don Siegel in the Audie Murphy programmer, Duel At Silver Creek, and as the decade progressed he got some meatier roles, parts that allowed him to show greater range as an actor, particularly opposite Spencer Tracy in the John Sturges directed masterpiece Bad Day At Black Rock and in the under-rated Budd Boetticher  western Seven Men From Now, opposite Randolph Scott. Marvin worked with other A list directors, albeit in small but memorable roles, for Raoul Walsh in Gun Fury and Edward Dmytryk in The Caine Mutiny. Marvin’s war credentials and acting graft saw him grab a starring role in the memorable war film, Attack, directed by Robert Aldrich.

Like many jobbing actors Lee Marvin made accommodations for the relatively new phenomenon of television and worked continuously during the so-called first Golden Age, starring in M Squad, a Chicago set police drama and guesting in many other series. John Ford reinvigorated Marvin’s film career by having him play the title villain in his masterful The Man Who Shot Liberty Valance, and Don Siegel gave him a key role in his remarkable remake of The Killers. Marvin was by now holding his own alongside screen legends like John Wayne in a series of macho vehicles like The Comacheros for Michael Curtiz and Donovan’s Reef, a lesser John Ford. Marvin’s long ‘apprenticeship’ finally paid off when he won a Best Actor Oscar for Cat Ballou, an off-beat comedy western, opposite Jane Fonda in 1965.

Lee Marvin entered his prime at this somewhat late stage, by now in his forties, and made a series of superb, career defining starring roles. He followed Stanley Kramer’s worthy Ship of Fools, opposite Vivien Leigh, with his superb turn in the Richard Brooks classic The Professionals, alongside Burt Lancaster and Robert Ryan.  Marvin enjoyed one of his biggest successes in the hugely entertaining Robert Aldrich film, The Dirty Dozen, before hooking up with maverick British director John Boorman for two of the best films he’d star in, the stylish and minimalist masterpiece Point Blank and a role that tapped into Marvin’s war service, Hell In The Pacific, opposite Japanese legend Toshiro Mifune.

Marvin spent the next decade making several films of varying quality, the highlights being a picaresque stroll with Paul Newman in Pocket Money, Prime Cut with Gene Hackman and Monte Walsh, opposite Jeanne Moreau. John Frankenheimer employed him in the unlikely screen adaptation of Eugene O’Neill’s The Iceman Cometh, with old pal Robert Ryan and veteran Frederic March, and the only other worthy entry in a fine career was Samuel Fuller’s ode to WWI infantrymen, The Big Red One.

Lee Marvin was a strong presence anytime he graced the screens, never less than compelling and watchable. He always said everything he got after surviving a war that saw most of his company killed was a bonus and he certainly was a man, and a star, who didn’t die wondering. Maybe just wanderin’….