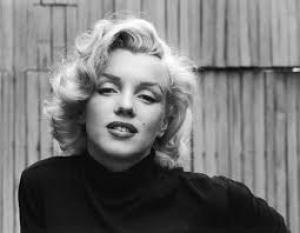 "your candle burned out long before your legend ever did"

“If I'd observed all the rules I'd never have got anywhere.”  ~ Marilyn Monroe

Marilyn Monroe is a name synonymous with timeless Hollywood glamour and beauty, but it’s a shame her fame and notoriety tends to obscure that fact that she was a fine actress, albeit in limited roles, and as luminous a screen presence as anyone who has graced the silver screen.  Not only did her face and form come to personify 1950’s ‘sex’, but her name and image has become a lightning rod for everything from feminist manifestos to her role in signifying America’s ‘whiteness’ as the Civil Rights era dawned, a lot to put upon such fragile shoulders.

Born to a troubled young mother in Los Angeles in 1926 as Norma Jeane Mortenson, (later Norma Jeane Baker) she never knew who her real father was and soon she was handed around to various family friends or foster families. Norma Jeane’s childhood was one of instability and sexual abuse before she married at 16 in an attempt to find a stable environment, instead she found alienation and boredom. Towards the end of WWII she began a modelling career that mostly entailed work for men’s magazines as a pin-up girl, eventually leading to the infamous nude shots that would be published in the first Playboy magazine after she was a well-known actress. The modelling career led to two short-term Hollywood contracts, first for Fox and then for Harry Cohn at Columbia, but few worthwhile roles were to follow. She studied acting in the interim and harboured ambitions to be a serious actress, having been entranced by the movies since she was a child, where she’d be routinely sent off to the pictures all day to get her out of the house. For the lonely little girl, the images on the screen were her means to escape.

1950 was the year where Monroe’s star began to rise. Apart from a couple of unsubstantial bits in a John Sturges boxing film, and a Micky Rooney comedy, she made audiences take notice in small, eye-catching roles as the brittle mistress in John Huston’s superb Film Noir, The Asphalt Jungle, and stood out in a stellar cast as a hopeful young actress in the classy All About Eve, from Joseph L. Mankiewicz and a huge hit which dominated at the next Oscars. Although Daryl F. Zanuck found her an underwhelming type, not to his liking, his studio’s owner Spyro Skouras was a big fan of what he saw and he instructed Zanuck to give her a starring role. Zanuck found a property, Don’t Bother to Knock, where she was to play a psychologically disturbed young woman, but he made her screen test for the part. Monroe didn’t sleep for 48 hours and studied hard, both getting the part and a congratulatory note from Zanuck. Marilyn may have been able to channel some of her mother in the part, as she was a diagnosed paranoid schizophrenic who spent much of her troubled life in and out of state institutions.

As a sign Monroe had arrived she was cast opposite Cary Grant by A-List director Howard Hawks, and did well in Monkey Business, a screwball comedy reminiscent of Bringing Up Baby. Marilyn then endured a series of dumb blonde parts that were big hits with the public, prime amongst them Gentlemen Prefer Blondes for Hawks again (with the dazzling, iconic musical number Diamonds Are a Girl’s Best Friend), and How to Marry a Millionaire for Jean Negulesco. In between the dizzy blonde roles she served notice she could act, creating a memorable femme fatale for Henry Hathaway in the technicolour Noir, Niagara. Marilyn was now one of the top movie stars in Hollywood, in the top ten earners and used her new-found clout to create her own production company, with a generous contract from Fox allowing her to make films for them as well. She starred opposite Robert Mitchum in Otto Preminger’s modest western, River of No Return, then found one of her iconic roles for Billy Wilder, in his fine adaptation of the stage hit The Seven Year Itch. A real-life subplot to that film was that her second husband, baseball great Jo DiMaggio, was so incensed at the New York street night shoot and the sight of his wife standing above a subway grate and displaying her underwear to all and sundry, that he walked out on the marriage.

Marilyn made the excellent Bus Stop for Fox, and succeeded again in reminding audiences that she was a capable actor, and then she produced The Prince and The Showgirl, deciding to film in London with her director and co-star Laurence Olivier. The film was problematic, and emblematic of Monroe’s need to prove herself, acting against the greatest thespian in the world at the time, but the film was tepid and her distractions with her new husband, playwright Arthur Miller, didn’t help. Miller had been asked by his friend Elia Kazan, who was having an affair with the actress, to squire her to a function that Kazan could not attend, but the pair hit it off, causing Variety to run the immortal headline, 'Egghead Weds Hourglass'. Monroe took extended leave from films, trying to get pregnant and suffering two miscarriages, before surfacing again for Billy Wilder, in the best film she was to make, Some Like It Hot. She is perfectly cast as Sugar Kane and more than matches the brilliance of Jack Lemmon and Tony Curtis in the superior farce. The film garnered Monroe a Golden Globe for Best Actress in a Comedy or Musical, vindication at last of her skills as a comedienne.

Despite her success she was notorious for causing problems on set with director's, showing up late, forgetting her lines, or not knowing them, of always having to have the approval of her acting coach etc, it didn't matter, and for the last word on that we need only turn to Billy Wilder himself who said of her - "My Aunt Minnie would always be punctual and never hold up production, but who would pay to see my Aunt Minnie?... They've tried to manufacture other Marilyn Monroe's and they will undoubtedly keep trying. But it won't work. She was an original."

She was now at the height of her fame, but personal and health issues sadly overtook her ability to work and she only completed two more features before her premature death at the age of thirty-six. The first was the mild George Cukor helmed Let’s Make Love, with Yves Montand, and the second was John Huston’s wonderfully downbeat modern western The Misfits. It was fitting that Monroe shared the screen with Clark Gable in his last film, as Monroe got into films partly because she fell in love with Jean Harlow (a frequent Gable co-star) as a child, and was actually angling to play the ill-fated Harlow in a mooted bio-pic. Gable died mere days after the demanding production shut down and Marilyn joined her screen idol some 18 months later in August 1962. The Misfits also saw the end of her marriage to Miller, after which she spiralled into a series of overdoses and depressions, whilst conducting affairs with both President John F. Kennedy and his brother Bobby.

Marilyn Monroe was a star for just over a decade, a woman who used her looks and brains to create a valuable commodity within the world’s biggest consumerist binge that was America in the 1950’s. The unloved and unwanted child who created a modern archetype where any amount of love, sexual or not, could be directed towards the idealised ‘girl’ she conjured. Marilyn, the powerless waif who used her power over many men to advance her station in an industry where the ‘casting couch’ was a by-word and men held all the cards, played the game by its own rules and made her name immortal. Social perceptions and needs morph with the changing times, and whereas smart, wise-cracking women roles were common in the 1930’s, Monroe’s placid/docile doll persona suited the escapist-consumerist needs of Eisenhower America and beyond. Third wave feminists would take gender roles to another stage altogether, where Marilyn and the blonde clones that followed would be consigned to the dust bin of history, neglecting the fact that Marilyn rose to control the production of her own image.

Marilyn Monroe carved her name in public consciousness with a series of films mostly made in a bare 6 year period from 1952 to 1957, yet it is a name that transcends movies, a name that borders on myth. Of course, it wasn’t her real name, it was a conceit, a sweet concoction for public consumption, but the price she paid was real, the ultimate price paid in full by Norma Jeane.