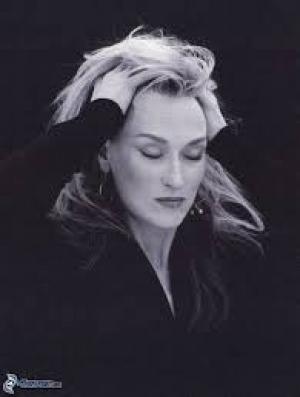 "Fear is a good thing. Fear is your friend. Everything that destabilises you can help you. They taught us that in drama school. If you’re comfortable, you’re not doing your job. Most actors are constitutionally insecure. It’s sort of necessary." ~ Meryl Streep

Meryl Streep began a stellar acting career from promising beginnings at Vassar College and Yale University, training that enabled her to succeed on Broadway almost from her first roles in 1975. Her star rose so quickly that by 1977 she was fielding offers from film companies. The roles started as minor support spots, in A-list projects like Fred Zinneman’s Julia, Michael Cimino’s The Deer Hunter and Woody Allen’s Manhattan. She quickly graduated to starring roles and her turn in Kramer Vs Kramer, Robert Benton’s divorce drama opposite Dustin Hoffman, marked her as an actress to watch and garnered her the first of a record-breaking number of Academy Award Best Actress nominations and a Best Supporting Actress Oscar to boot.

Scion of the British new wave, Karel Reisz, gave her a career defining role in the wonderful The French Lieutenant’s Woman in 1981, a dual role piece that showcased her ability to play shaded and deep female characters, before Robert Benton cast her in his Hitchcock influenced The Still of The Night, opposite Roy Scheider. The film proved a good commercial, if not artistic choice and confirmed her status as an A-list movie star, but if there was any doubt it was blown away completely by her next film, Sophie’s Choice, for Alan J. Pakula. Streep delivered one of the great screen performances in the difficult part of a holocaust survivor navigating the post-war world in sleepy Brooklyn. The critics could not ignore it and she was duly awarded almost every acting honour available, and it seemed from then on, any article involving her inevitably featured the line, ‘world’s greatest actress.’

Streep, to her eternal credit, never put any store in the lazy sobriquet and focused on her work, following up with a solid role for Mike Nichols in Silkwood. She plays opposite Robert De Niro again in the minor, Falling In Love and does better with the complex war time David O’Hare play-turned-film, Plenty, directed by Fred Schepsi. She scored a huge commercial mainstream success for Sydney Pollack in the satisfying epic, Out of Africa, opposite Robert Redford, and at this point in her career she had the pick of the stall.

She wrong footed everyone and followed up with two back-to-back co-starring features opposite Jack Nicholson, still in his pomp, in Heartburn for Mike Nichols and in Ironweed, and they could not have been more different in tone and theme. She’d quickly gained a reputation as a master of accents, which again was a lazy way of defining an actress with astounding range and technical ability, but she did herself no favours in this regard by mastering the difficult New Zealand/Australian accent of Lindy Chamberlain, a falsely accused child murderer in A Cry in The Dark (or Evil Angels), for Fred Schepsi.

At this point Streep’s reputation could be no higher, but rather than fulfil her potential as a dramatic actress she concentrated on comedies of various hues of darkness with her next 4 projects, with varying degrees of success. They were She-Devil, Postcards From The Edge, Defending Your Life and Death Becomes Her. She embraced drama again in the odd international ensemble cast project of The House of The Spirits, before Curtis Hanson reinvented her persona as an action woman in the solid thriller The River Wild. Streep moved into the next phase of her career in the mid 90s by playing a rural housewife who has an affair with a photographer in Clint Eastwood’s excellent The Bridges of Madison County.  Her performance as the emotionally torn, taken for granted, displaced migrant woman in the heartland is amongst the most beautifully nuanced and touching characterisations that she's delivered.

Great roles for middle aged actresses are not common in the film industry and, incredibly Steep found the same issues applied to her as she aged. She worked solidly in some unremarkable features, like Before and After, Marvin’s Room and One True Thing, but she always acquitted herself well and was usually the best aspect of each project. After a couple of fallow years, she hit the new millennium in style by providing a strong presence in Spike Jonze’s masterful, Charlie Kaufman scripted Adaptation. She followed it with a thoughtful turn in the psychological drama The Hours with Nicole Kidman and Julianne Moore and a star turn in Jonathon Demme’s remake of The Manchurian Candidate, following in the footsteps of the formidable Angela Lansbury.

Another career highlight appeared courtesy of veteran Robert Altman, in what would turn out to be his last film, in A Prairie Home Companion, where Streep was called upon to sing country music in the role alongside Lily Tomlin. It also reunited her with her Sophie’s Choice co-star, the redoubtable Kevin Kline. For the next half dozen years Streep alternated between non-challenging commercial hits like The Devil Wears Prada and Mamma Mia! and darker, smaller films like Evening and Doubt, opposite Philip Seymour Hoffmann. Robert Redford gave her a nondescript part in his Lions for Lambs and Nora Ephron provided her a nice vehicle as chef Julia Childs in the charming Julia and Julia, before she found another career defining challenge in playing Margaret Thatcher in The Iron Lady, for Phyllidia Lloyd. The performance deservedly garnered her a third Academy Award for acting, a second Best Actress Oscar, firmly engraving the ‘best actress ever’ epithet on every subsequent by-line.

Streep continued to find the odd standout role as the decade rolled on, notably for Stephen Frears in one of her best comic turns as Florence Foster Jenkins, and for Stephen Spielberg in The Post, opposite Tom Hanks, where she played Katherine Graham, the owner of The Washington Post during the 1971 turmoil as the paper struggled to publish the controversial Pentagon Papers. She continues to find good work in an industry that has constantly failed to support older actresses and given that the quality of her output shows no sign of diminishing it seems certain she’ll discover more roles worthy of her singular skills.

Meryl Streep is a byword for excellence, for committed characterisations and hard work, and she is always the best thing involved in any project she takes on. It seems cod-obvious to highlight the ridiculous notion that a subjective artform like acting can have empirical measures, but excellence can always be affirmed and attested, and when one watches any Meryl Streep performance, the quality leaps off the screen. If any descriptor suits her as an actress, it’s that she is fearless – unafraid to let her vulnerability or emotions shine through in any circumstance. She has provided the artform with some of its gold standard measurements and she has been remarkably able to do that across several decades, simply put, she is the acting queen, a universal treasure. Long may she reign.