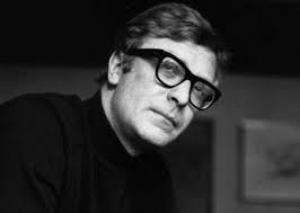 Michael Caine created a full and varied cast of characters over six decades as a working actor, making over 100 films since his breakthrough in Cy Endfield’s Zulu in 1964. His no nonsense work ethic, spurred on from a childhood of grinding poverty led him to opt to work in lesser quality productions rather than not work at all, resulting in an uneven but very full career. Caine’s famous gimlet-eyed grin and soft-toned purr has graced many a memorable production and by sheer dint of numbers and natural ability he was responsible for several of the most indelible characters in British or International cinema. He started life as Maurice Micklewhite, a working-class, Cockney kid in the East End of London, and after a stint in the army in the early 1950’s he fell into acting via a job as a stage manager with walk-on roles. He decided on his new surname after spotting The Caine Mutiny on a film billboard, Humphrey Bogart being his favourite actor.

Caine knocked around in provincial theatre and in 1954 moved to London, before he started to work in film and television. He found bigger and better parts, understudying Peter O’Toole in The Long and the Short and the Tall, and taking the role when O’Toole went to do Lawrence of Arabia. Stanley Baker, then a big film star, recommended Caine to Cy Endfield for Baker’s production of Zulu and after a decade of hard graft Caine became an ‘overnight’ star. Caine tapped into the zeitgeist with his next starring roles, as the downbeat spy Harry Palmer in The Ipcress File and the eponymous Alfie in Lewis Gilbert’s film. Alfie was written by Bill Naughton, a writer familiar with Caine as they’d worked together in TV and radio a half a dozen years prior, and the same working-class tone and accents were in play in all the Naughton work. Michael Caine was able to use his own accent, an option not really available to aspiring actors in previous generations, given the dominance of Received Pronunciation or the plummy tones of the BBC.

Caine was now a ‘face’ in Swinging London, hanging out with the beautiful people like John Lennon and having his pick of A-list projects and directors. During the rest of the 1960’s he worked with Bryan Forbes in The Wrong Box and Deadfall, and veterans like Otto Preminger in Hurry Sundown (opposite Jane Fonda) and Ronald Neame in Gambit. He reprised Harry Palmer twice, first for Guy Hamilton in Funeral in Berlin in 1966 and in Billion Dollar Brain, directed by iconoclast Ken Russell in 1969. Caine’s effortless cool and natural affability paid huge dividends in the good-natured crime romp The Italian Job, opposite legend Noel Coward. Caine took his place with British acting aristocracy in the all-star Battle of Britain, and worked with American veteran Robert Aldrich in the excellent and under-rated Too Late The Hero.

James Clavell directed Caine in The Last Valley, a fine filmed version of his own novel, opposite Omar Sharif and evidence that Caine had reached the top of the pile of Brit actors was his two-hander opposite Laurence Oliver in Joe Mankiewicz’s adaptation of Anthony Shaffer’s play Sleuth. Mike Hodges provided Caine with two excellent roles, in Get Carter and Pulp, the former becoming one of the actor’s most iconic. In the 1970’s he worked with veteran American directors, Don Siegel (The Black Windmill) Robert Parrish (The Marseille Contract) and John Sturges (The Eagle Has Landed), all worthwhile projects alternately gritty, quirky and effective.

As Caine moved into middle age, consistent quality roles became scarcer, but Brian DePalma’s Dressed To Kill and Sidney Lumet’s Deathtrap were exceptions, before Alfie director Lewis Gilbert offered a ‘cast against type’ role as the educator in Educating Rita, a role that brought an Academy Award nomination and wins for a BAFTA and Golden Globe. 1986 brought Woody Allen’s Hannah and Her Sisters and Caine starred opposite Mia Farrow and won an Academy Award as Best Supporting Actor. It was a good year as he had a brilliant role in Neil Jordan’s superb Brit crime drama Mona Lisa, before Caine rounded out the 80’s with a fine comic turn in Dirty Rotten Scoundrels, the broad Frank Oz re-make of Marlon Brando and David Niven’s Bedtime Story.

After a string of forgettable films Caine made a comeback to critical acclaim with a couple of key roles in the late 1990's, winning a Golden Globe for Little Voice, and another Academy Award for Cider House Rules, both smaller and less mainstream projects. It appeared his peers were still paying attention even if 'Hollywood' was not. "It's much harder to act in a bad film than in a good one. A terrible script makes for very difficult acting. You can win an Academy Award for some of the easiest acting in your career, made possible by a brilliant script." ~ Michael Caine

The forgettable films were still coming and the only exceptional late career films came in collaboration with Christopher Nolan, seven films as at 2018, best amongst them The Prestige, Batman Begins and The Dark Knight Returns. A fine cameo in Children of Men presaged excellent roles in Kenneth Branagh’s Sleuth, a re-make of Caine’s earlier film where this time he played Olivier’s role opposite Jude Law. He then made a kind of elderly British Dirty Harry in Harry Brown, a reactionary vigilante, a film that embodied some of Caine’s decidedly conservative political views.

Michael Caine can look back on a brilliant career that produced a legacy a poor working-class, Cockney boy with the ‘wrong’ accent could only have dreamed about. He brought a down to earth, affable persona to the screen, but could play upper-class or cool and detached, his naturalistic ease filmed beautifully and his distinctive, mellifluous voice and delivery so recognizable it’s become the fodder for heartfelt parodies. Well played that player.