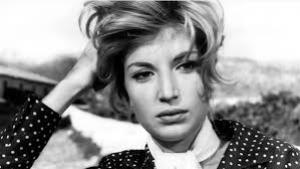 'Monica Vitti is astonishingly mobile. Few actresses have such mobile features. She has her own personal and original way of acting.'
~ Michelangelo Antonioni

Born in Rome as Maria Ceciarelli in 1931, Monica Vitti would set the screen alight in the early 1960s as the muse to legendary Italian director Michelangelo Antonioni in a series of unforgettable films in one of world cinema's most successful and significant director-star partnerships. Monica Vitti’s incandescence and under-rated acting chops set hearts aflutter as her cool detached persona chimed perfectly with the new European cinema that shook the world and set off a renaissance in Hollywood in the culture storms of the 1960s.

She had dabbled in acting as a teen and after graduating from Rome’s National Academy of Dramatic Arts in 1953 she worked in travelling acting troupes and on stage in Rome and worked in small film parts in Laugh, Laugh, Laugh and a couple of TV movies until a break doing a voice over part for Antonioni’s film Il Grido in 1957. Antonioni cast her as Sally Bowles in his stage version of I Am a Camera before he concocted the perfect film vehicle for his new love. Vitti’s breathtaking beauty, a combination of natural good looks and an ethereal presence, led the director-lover into creating opportunities for her as a leading lady, starting with the astonishing and controversial L’Avventura in 1960.

Vitti enduring an arduous and problematic shoot only to have the film booed and jeered at the Cannes premiere, leaving the young actress in tears. The film however was nominated for the Palme D’or and won the Jury prize and has since been acknowledged as one of the most important and finest films of all time. Antonioni followed it up by starring her opposite bona-fide movie stars Jeanne Moreau and Marcello Mastroianni in La Notte, establishing Vitti as the hot new European star. Agnes Varda offered her a starring role in 1962 but Vitti demurred, saying “I want to remain loyal to Michelangelo, who has promised to make me the Carole Lombard of the second half of the century.”  Perhaps Michelangelo never got the memo as her next film with the maestro was one of his moodiest masterpieces, the very un-screwball L’Eclisse, with French heartthrob Alain Delon.

Vitti spent her energy away from Antonioni in a series of comedy films, showing that great beauty was no impediment to acting ability and that she was indeed a capable comedienne, as Marilyn Monroe had battled to do a decade before. International co-productions were very much in vogue during this period, as were Anthology or Portmanteau Films – episodic stories usually broken into three or four parts, each wholly contained and made by different directors with different casts. In Three Fables of Love, Vitti holds up the Italian end against Leslie Caron and Anna Karina doing the French and Spanish sections respectively. A pointer to her status and desirability was that Roger Vadim, a notorious ladies’ man, cast her in Nutty, Naughty Chateau and cast her against Curt Jurgens and Jean-Louis Trintignant, in a mild French farce. That same year she tried her hand in the odd French satire Sweet and Sour, with a multitude of current stars poking fun at the contemporary film culture, before Antonioni gave her one of her greatest roles in The Red Desert, a singular drama with no laughs at all.

The performance won her the prestigious Italian Award, The Golden Grail, and during this period she worked on stage for Zeffirelli in Arthur Miller’s After The Fall (his ode to Marilyn Monroe) but instead of solidifying her reputation as a fine dramatic actress, she again embarked on a series of comedies and her personal relationship with Antonioni ended. She filmed a broad comedy with Italian superstar comic Alberto Sordi and another comedic anthology film called La Bambole. An Italian French production saw her sharing screen time with Raquel Welsh, Capuncine and Claudia Cardinale in the obviously titled Sex Quartet, but the film won her another Italian Film Critics Best Supporting Actress award.

In 1967 she achieved international film stardom with her performance in Modesty Blaise, she played the titular role for Joseph Losey as the comic book spy, co-starring Dirk Bogarde, after Antonioni had shot Blow Up with the not dissimilar Vanessa Redgrave and model- actress Veruschka effectively replacing Vitti. Oddly, Antonioni accompanied her on the Modesty Blaise shoot, offering suggestions, until Losey asked him to leave. Even though she was uncomfortable speaking English (she only made one other film where she did) the light-hearted tone suited her comedic sensibilities and she continued to follow her heart in a series of Italian romantic comedies I Married You for Fun and Kill Me Quick, I’m Cold. She won more acting awards for the former and made the very successful and offbeat comedy/drama The Girl with The Pistol in 1968 for Mario Monicelli.

Now at possibly the height of her beauty and fame, she rejected working with international A-list directors and stayed faithful to the Italian film industry making another hit with Sordi, in a film he directed and co-starred in, Help Me, My Love. She embarked on a long term relationship with her Red Desert cinematographer, Carlo Di Palma and he directed her in three films, including Teresa the Thief in 1973. Monicelli directed Sordi and Vitti with Vittorio De Sica in Le Coppie and she worked almost exclusively in comedies throughout the 1970s. Between 1969 and 1975 she’d won 10 major Italian acting awards before Luis Bunuel showcased her talent in a relatively small part for The Phantom of Liberty. She continued her run of competent Italian comedies with undistinguished directors, occasionally playing against former A-list stars like Claudia Cardinale.

'In the morning, I'm like the Antonioni movies. I'm little sad. I haven't the courage to start the day. In the evenings, I'm happier, more alive - like the character I play in 'An Almost Perfect Affair.'  ~ Monica Vitti

Vitti made one more attempt at an English language film with Michael Ritchie’s An Almost Perfect Affair, a fine film that failed to find an audience before she reunited with Antonioni for a TV film, a drama The Mystery of Oberwald, an adaptation of a Jean Cocteau play. She also reunited with two other key collaborators in Sordi, for the hit comedy, I Know That You Know That I Know and with director Monicelli for another hit Camera D’albergo, for which Vitti won another Best Actress at the Italian Golden Globe Awards. She repeated the effort in 1983 for the Roberto Russo drama Flirt, the 9th time she’d won the award.

Russo, with whom she was in a relationship, directed her again in 1986 in Francesca e Mia but Vitti worked very little on film in the decade. She finished her film career in 1989 with a property she directed herself, Secret Scandal, for which she cast Elliot Gould as her leading man. It was a fitting end in some way, the plot involved a director husband who cheated on her, and it won her another Italian Golden Globe Award, marking the end of a luminous if somewhat internationally under-realised career by a singular woman. She received a lifetime Golden Lion award at Venice in 1995 and retired with now husband Russo until her death in 2022.

Monica Vitti embodied international cinema for a decade and is as indelible a star as any other during one of the most fertile and creative periods in the history of cinema. She was pigeonholed as a mysterious, insular beauty because of the remarkable impact of Antonioni’s trilogy of isolation, disconnection and modernity and often complained that is was far removed from her actual personality. Her grace and mystique was unmistakable but her cool, affected insouciance was a triumph of sleight of hand. She had the world at her feet when Beatlemania was raging and the counterculture was taking off, and yet she was content to stay home and be the queen of Italian cinema. Antonioni showcased her to the world, but her artistry, skill and her beauty made her a screen immortal for world cinema lovers everywhere.  To watch her subtlety and movement in L'Avventura is to understand natural beauty, style and elegance - it is to become entranced with cinema itself as you fall under her spell - bewitched, bothered and bewildered.