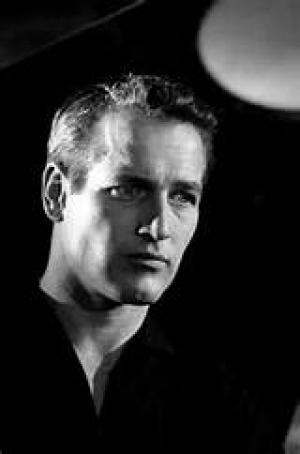 "I'd like to be remembered as a guy who tried — tried to be part of his times, tried to help people communicate with one another, tried to find some decency in his own life, tried to extend himself as a human being. Someone who isn't complacent, who doesn't cop out."
~ Paul Newman

In the wake of the Actors Studio assault on modern acting techniques, and of the success of its high profile students like Marlon Brando, Montgomery Clift and James Dean, several alumni lit up the theatres and film sets of the post war era, none more durable or talented than Paul Newman. Newman had served in the Navy during WWII and pursued an acting career via the time worn path of stock theatre groups before he arrived in New York to study at the famed acting school in Hell’s Kitchen. He made his Broadway debut in Picnic  in 1953, with Kim Stanley and was lured to Hollywood for the tepid costume drama The Silver Chalice  the following year, an inauspicious debut for an actor on the rise.

Robert Wise gave him an early boost on screen with the excelletnt boxing pic Somebody Up There Likes Me,  before he found his metier in film with the works of Tennessee Williams and William Faulkner, making a huge splash with Cat on a Hot Tin Roof  and The Long Hot Summer  respectively. He won a Best Actor award at Cannes for his work in Martin Ritt’s film of the Faulkner story in 1958, and also enjoyed a hit with Arthur Penn’s The Left Handed Gun,  a version of the Billy the Kid legend from a teleplay by Gore Vidal. Newman found one of his finest roles in Robert Rossen’s superb The Hustler,  in 1961, playing pool shark Fast Eddie Felson, a role he would reprise for Martin Scorsese in The Colour of Money,  finally winning a Best Actor Oscar (his sixth attempt) in 1986.

The Sixties belonged to Newman in terms of artistic achievement with stand out roles in Sweet Bird of Youth, Harper, Hud,  and Hombre  all gaining significant box office returns and critical acclaim. Such was his star power that Alfred Hitchcock sought him out for the offbeat and unloved Torn Curtain,  before he ended the decade with two of his best and most iconic roles, the immortal Cool Hand Luke  and as the most affable robber the west ever saw, Butch Cassidy, in William Goldman’s charming conceit, Butch Cassidy and the Sundance Kid,  directed by George Roy Hill.

As the seventies dawned he found himself at the top of his game and, as American cinema enjoyed a resurgence, Newman opted for more personal projects rather than making safe box office choices. Paul Newman met Joanne Woodward, his second wife, at the Actors Studio in the 50’s and she starred opposite him in ten films over 4 decades, but was directed by him in an Oscar nominated performance in 1968, in Rachel, Rachel.  He then made several small, downbeat and modest films like the political thriller WUSA, Sometimes a Great Notion,  and Pocket Money,  movies that aligned more with the film brat generation of Scorsese, Lucas and Spielberg, than the classic era of 1950’s cinema where he cut his teeth.

Newman was able to balance commercial blockbusters like The Sting,  his second buddy film with his friend Robert Redford, again directed by George Roy Hill, and The Towering Inferno,  alongside Steve McQueen, with personal projects like The Effect of Gamma Rays on Man in the Moon Marigolds,  in which he again directed his wife and this time his daughter Nell. He sought out maverick directors like Robert Altman, with whom he made the quirky Buffalo Bill and the Indians  and the bleak post apocalyptic Quintet  in 1979. He made fine films with noted directors Sydney Pollack and Sidney Lumet in Absence of Malice  and The Verdict  respectively before finally winning his Best Actor Oscar for Scorsese’s The Colour of Money  with Tom Cruise and Mary Elizabeth Mastrantonio.

Newman wound back his film work after the personal tragedy of losing his son Scott to drug addiction, putting in time and resource to charity work and setting up various foundations. He still made some fine films in the 1990’s, notably Mr and Mrs Bridge  for the famed Merchant Ivory team, The Hudsucker Proxy  for the Coen brothers and a couple of excellent pieces with Robert Benton, in Nobody’s Fool  and Twilight.  He made nice work in a small role in the Sam Mendes gangster flick The Road to Perdition  before all but retiring from films in the early 2000’s, doing some voice-over work in animations like Cars.  He died of lung cancer at age 83 in 2008.

Paul Newman avoided the pitfalls of being tied to a studio with limited choices in projects he would be assigned to, by maintaining his independence and working with directors he respected. His name became a byword for integrity and over his career he continued to work with left leaning liberals (Ritt, Rossen, Penn) and supported many liberal causes like civil rights and made an enemy of Richard Nixon on the way. He is quoted as saying making Nixon’s enemies list was his proudest achievement.

Paul Newman carved a distinguished career based on intelligence and commitment to the art, providing an indelible gallery of heroes and anti-heroes, able to create characterisations of depth and nuance. His easy charm and good grace belied a fierce ability to find intensity and fire when required, and while he may have benefited from the vacuum created by James Dean’s untimely death, he soon left those lazy comparisons behind and eventually left a legacy of work second to none. Newman’s gift was to be able to portray his deep humanism and intelligence in every role he played, and also to sparkle with humour and wit, never falling for the fakery of the Hollywood life. He stayed married and faithful to Joanne Woodward for 50 years and when famously asked how he managed it in the business he was in he said, “Why go out for hamburger when you have steak at home”.  A class act.