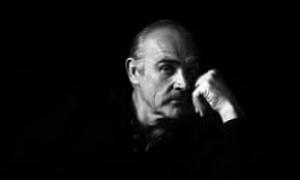 'I'm an actor - it's not brain surgery. If I do my job right, people won't ask for their money back.'
~ Sean Connery

Thomas Sean Connery was born in 1930 in a poor part of Edinburgh, Scotland to working class parents. He escaped to sea via the Royal Navy at the tender age of 16 and after a stint in various odd jobs like truck driving and delivering milk, he fell into theatre in London in a chorus part in South Pacific. He tried his hand at bodybuilding while he built his theatre chops alongside fellow young hopefuls Ian Bannen and Michael Caine, and also started to land small roles in TV and film before he got a big break in Lewis Allen’s Another Time, Another Place, in 1958, a Lana Turner vehicle where he was third billed. The opportunity proved a short-lived chimera and soon the strapping actor was doing bit parts again, usually as a hard man villain, or miscast in comedies like Disney’s Darby O’Gill and The Little People and Anglo Amalgamated’s On The Fiddle.

A third billing in The Frightened City, a mild Brit Noir and a bit part in the Blockbuster WWII film The Longest Day were nothing to write home about until producers knocked on his door regarding a certain debonair spy, written by Ian Fleming. Connery was a seasoned 30-year-old veteran when fame arrived with Terence Young’s first James Bond film, Dr. No. He assured his future by signing on to a five-picture deal to play Bond and his next two features were Terence Young’s From Russia With Love and Guy Hamilton’s Goldfinger. Connery was now one of the most famous celebrity actors on the planet, a fact that rankled the taciturn Scot, and he sought to break away from the formula almost immediately. He signed on for veteran Basil Dearden’s Hitchcockian thriller, Woman of Straw, opposite Gina Lollabrigida and Ralph Richardson, which fell flat commercially, before he actually starred in Alfred Hitchcock’s Marnie, a layered psychological effort that finds more favour now than it did at the time.

Realising his clout at the box-office as Bond, Connery enabled backing for a personal favourite in Sidney Lumet’s masterful, The Hill. Connery delivers one of his great performances in a brilliant cast, including Harry Andrews, Michael Redgrave and his good friend Ian Bannen. Connery held his own in talented company, but Bond came calling and Thunderball was yet another hit directed by Terence Young. He played against type in A Fine Madness, opposite Joanne Woodward and Jean Seberg, before his fifth Bond entry, You Only Live Twice. Still looking for worthwhile non-Bond projects, and having turned down the next Bond film, Connery settled on an odd western, Shalako, albeit one with a noted American director in Edward Dymtryk and a dream co-star in Brigitte Bardot. The results were a mixed one artistically, but the film did well at the box office.

Connery fared much better for Martin Ritt in the superb The Molly Maguires, starring alongside Richard Harris, an atmospheric tale of workers in the mines of Pennsylvania in the 1870’s. He reunited with Sidney Lumet for the modern and excellent The Anderson Tapes, a noir-ish crime film scored by Quincy Jones. The non-Connery Bond film, On Her Majesty’s Secret Service with George Lazenby was a relative flop and Connery was made an offer he couldn’t refuse to star in his sixth Bond film, Diamonds Are Forever, another blockbuster hit. Connery continued his happy association with Sidney Lumet and excelled in the dark themed The Offence, essentially a two hander between Connery’s driven detective character and Ian Bannen’s lugubrious criminal. That may be Connery’s finest hour on film, and his mate Bannen more than matches him, but it remains under-valued and under seen.

Connery was having difficulty now, in breaking away from the Bond stereotype, and in being offered work he found suitable. Brit director John Boorman was a white hot talent when he got Zardoz, the oddest film of his career green-lit, only to have Burt Reynolds pull out at the last minute due to illness. Connery jumped in to fill the breach, but the film confused star and audiences alike and continues to be an acquired taste. Lumet came to the rescue again with his all-star ensemble piece, Murder On The Orient Express, where Sean had not a lot to do but did it well. He starred opposite a wooden Candice Bergen in John Milius’ epic, The Wind and The Lion, the iconoclastic American’s attempt to create a Lawrence of Arabia, Boy’s own mythology around Theodore Roosevelt’s Imperialist efforts in the middle east in the early 1900’s that didn’t quite meet its own ambitions.

John Huston finally produced his version of Kipling’s The Man Who Would Be King, a project he’d chased for decades (originally casting Bogart and Gable) and Connery took one of the leads opposite his old friend Michael Caine to deliver one of the great adventure yarns and a superb film by any measure. Next came a fine, warm hearted Richard Lester helmed piece, Robin and Marian, with the now middle-aged actor starring against Audrey Hepburn as the legendary, if older lovers. Connery made a mark in the Richard Attenborough WWII epic, A Bridge Too Far, and did well in the very sharp crime film, The Great Train Robbery, for Michael Crichton. A couple of neither-here-nor-there efforts ended the 1970’s in Meteor and Cuba, the latter again for Lester, before he started an association with director Peter Hyams in the excellent sci-fi, Outland.

Connery was still having difficulty finding a slot for his middle aged acting chops, working with Richard Brooks to middling effect, before he did what he said he’d never do, and holstered up for one last tilt as James Bond in Never Say Never Again, an unofficial entry in the franchise. After a surprise hit in the exceedingly silly Highlander, the 1980’s provided Connery with three plum roles in succession, The Name of The Rose providing him with one of his best characters, a medieval detective monk. Brian De Palma gave him a fits-like-a-glove part in his big budget The Untouchables, lining him up with Robert De Niro and Kevin Costner in the huge commercial and critical hit. Connery’s role as the Irish-American cop fighting Al Capone won him a Best Supporting Actor Academy Award. Peter Hyams provided the hat trick with The Presidio, a fine military, crime mystery with Meg Ryan.

Connery settled into a settled routine of high profile, Hollywood roles for A-list directors, with the odd cameo to keep his face before a generation that didn’t know him as Bond. George Lucas and Steven Spielberg cast him as the father of Indiana Jones, in Indiana Jones and The Last Crusade, and his old colleague Sidney Lumet came good once again, with Family Business opposite Dustin Hoffman. John McTiernan’s The Hunt For Red October was a huge commercial hit and a fine cold war type thriller, and Fred Schepsi’s The Russia House was a glossy rendering of a Tom Stoppard screenplay shot in Russia with Michelle Pfeiffer that also did well. McTiernan again provided a solid role in the uneven Medicine Man, and Rising Sun, for Philip Kaufman proved just as uneven. Connery was miscast in a Bruce Beresford comedy and the crime thriller Just Cause continued the trend of missed opportunities that must have looked good on paper.

First Knight was an uninspired Arthurian retelling, with Connery as Arthur against Richard Gere’s Lancelot, and a great role finally appeared from the unlikely direction of Michael Bay with his excellent action blockbuster, The Rock. Connery is superb as the misfit throwback against Nicholas Cage and Ed Harris and in 1999 he turned in the one of his last decent performances in Entrapment, a solid thriller with Catherine Zeta-Jones. At the turn of the millennia Gus Van Zant directed him in a fine drama where Connery played an ageing writer in Finding Forrester. A messy adaptation of The League of Extraordinary Gentlemen in 2003 proved to be his final feature, unfortunately going out with a whimper and not a bang.

Sean Connery will be a screen immortal because of James Bond, and his six Bond films set the template for the genre to successfully continue into the 21st century, to the point where the Connery cycle is decidedly quaint by comparison. Even if the recent CGI era franchise is turbo charged and effect driven to a much higher degree than the originals, it’s Connery’s muscular presence and steely stillness that still makes them viable and alive. Sean Connery was something of a last century man, a hard Scot who didn’t suffer fools gladly and who kept some borderline Neanderthal attitudes to women that were very much out of place in the PR/Brand managing era of celebrity. As an actor he held his own with many of the greats, and his roles in Marnie, The Hill, The Molly Maguires, The Offence, The Man Who Would Be King and The Name of The Rose speak to an intelligent, thoughtful performer who was so much more than the famous spy he will forever be associated with.