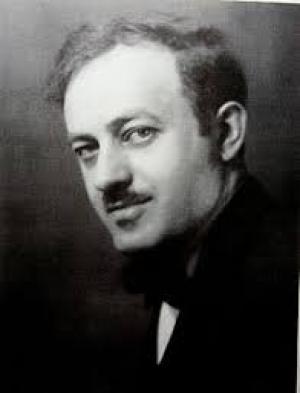 'There are millions of Americans who belong by nature in movie theatres as they belong at political rallies or in fortuneteller parlours and on the shoot-the-chutes. To these millions, the movies are a sort of boon - a gaudier version of religion.'  ~ Ben Hecht

Ben Hecht had lived a full and adventurous life as a war correspondent and crime reporter in Chicago before he arrived in Hollywood at the end of the silent era. He’d also enjoyed a career as a successful playwright and as a wordsmith par excellence he soon made a solid connection with director Howard Hawks, a noted champion of fine writers. One of his first notable efforts was, ironically enough, a silent film for Josef Von Sternberg, Underworld, a film that was so successful it spawned the gangster genre. Hecht kicked off his Hollywood run in spectacular fashion as Underworld earned him the very first Oscar awarded for a screenwriter in 1928.

*Hecht often worked on screenplays in collaboration with other writers, particularly with his co-writer for many of his hit plays, Charles MacArthur, and was involved in uncredited work on countless films. For the sake of clarity here, we’ll stick to films that he was given credit for in the titles. There was a famous note sent to Hecht by noted writer and roue Herman Mankiewicz, encouraging the writer to come to Hollywood for $300 a week saying, ‘All expenses paid. The three hundred is peanuts. Millions are to be grabbed out here, and your only competition is idiots. Don't let this get around.’  Hecht was fortunate to arrive when actors had to suddenly deliver dialogue and good writers were suddenly in demand.

Howard Hawks gave Hecht his most prominent early successes, and it was the prickly writers practice to raid Hollywood for funds for only short periods of time, only to decamp to New York as soon as he’d topped up his bank account. It was during one of these sojourns that he co-wrote The Front Page with MacArthur, which was a huge hit on Broadway. Howard Hughes produced the film version, directed by Lewis Milestone and starring Adolphe Menjou and Pat O’Brien and on the basis of that success he funded Howard Hawks’ production of Scarface in 1932, a runaway hit starring Paul Muni. Ernst Lubitsch tapped Hecht to adapt Noel Coward’s witty Design for Living, and the writer proved his versatility by doing a first-rate job, before Hawks gave him the job to write his Mexican revolution piece, Viva Villa! That film fell apart and after Hawks was fired it was finished by Jack Conway.

Hecht proved equally adept at witty, comedic pieces as with hard edged crime drama, and after he churned out another Broadway hit play with Twentieth Century, Hawks had him adapt it for the screen, where it allowed John Barrymore one of his finest screen characterisations opposite the exquisite Carole Lombard. Hecht and MacArthur formed a film production company, and they co-directed their first film in a four-picture deal with Paramount, Crime Without Passion, starring Claude Rains, then coming off a hit for Universal with The Invisible Man. The other three films in the contract were of no lasting consequence to Hecht’s legacy, with the odd exception that the 1935 film he directed, The Scoundrel, was Noel Coward’s film debut!

'The rule in the art world is: you cater to the masses or you kowtow to the elite; you can't have both.'
~ Ben Hecht

Hecht’s prolific output was unflagging, and Hawks popped up again with the adventure film Barbary Coast, John Ford put him to work (uncredited) on The Hurricane and David O. Selznick brought about a reunion with Lombard in the witty and acerbic Nothing Sacred, directed by William Wellman. The end of the 1930s saw work for George Stevens on the superb Gunga Din, uncredited work for Ford again on Stagecoach and working for Sam Goldwyn in adapting Wuthering Heights, directed by William Wyler. Hawks updated The Front Page by casting one of the roles as female, causing Hecht to re-visit the project with a new collaborator, Charles Lederer. The resultant His Girl Friday starring Cary Grant and Rosalind Russell is rightly regarded as one of the greatest film comedies of all time.

Hecht reclaimed the director’s seat with Angels Over Broadway, a pre-noir that he also wrote and produced and offered Rita Hayworth her first starring role in. Not as much fuss was made in Hollywood over Hecht’s achievement as there would be over Preston Sturges when he mounted the same multi-role effort in the same year. Hecht and Lederer provided MGM with a witty screenplay for Comrade X, starring Clark Gable and Hedy Lamarr in an enjoyable piece of fluff. He worked for the displaced French master, Julien Duvivier for Lydia, a re-make of the directors Carnet De Bal, starring Merle Oberon. He scored a huge hit for Fox in 1942 with the Tyrone Power swashbuckler The Black Swan, worked for Henry Hathaway for China Girl and did patch up work for Hawks on The Outlaw and for Hitchcock on Lifeboat.

The next significant collaborator Hecht worked with was Alfred Hitchcock, then in the early phase of his Hollywood career. Hitch had already asked Hecht to write the coda to Foreign Correspondent, i.e. the speech delivered by Joel McRae to American radio audiences as Europe falls into war. Hitchcock tapped the in-demand writer for two of his most significant films of the period, Spellbound in 1944 and Notorious in 1945. Hecht split that pair of hits with another writer/director/producer effort, the quirky drama, The Spectre of The Rose, which was supposed to be part of a multi-picture deal with Republic but proved to be the only one to see the light of day.

In the next phase of Hecht’s remarkable career in the late 1940s, he settled into providing crackling, biting dialogue for several exceptional Film Noir projects, a genre particularly suited to Hecht’s skills. In concert with Lederer he wrote Henry Hathaway’s Kiss of Death for Fox and Robert Montgomery’s vivid Ride The Pink Horse, for Universal. A rare comedy for Lucille Ball and a bad misfire with Frank Sinatra separated his next Noir’s, Whirlpool and Where The Sidewalk Ends, both written for Otto Preminger at Fox, and both sparkling examples of Hecht’s craft.

Ben Hecht delivered his final triple threat film with Actors and Sin, a not very memorable production that failed to set the box office alight, before he delivered a hit for his old colleague Howard Hawks in Monkey Business, starring Cary Grant. He worked on the odd Kirk Douglas vehicle Ulysses, a Paramount co-production with an Italian company, and the association continued with Douglas on The Indian Fighter, a typically action filled western for the energetic actor. Hecht was associated with the disastrous Katharine Hepburn and Bob Hope vehicle The Iron Petticoat, that caused him to remove his name from the Ralph Thomas directed mess.

The end of an incredible career was marked with much uncredited script doctoring, as was usual throughout his career, the highlights of which were a Hemingway adaptation in A Farewell to Arms, starring Rock Hudson, and a couple of Henry Hathaway/John Wayne projects, Legend of The Lost and Circus World in 1964, the year he passed away. Hecht finished not with a bang but with a whimper in 1967, via a pre-written version of Casino Royale, where his script was a straight action and drama piece rather than the spoof that was settled upon and filmed.

'Hollywood held this double lure for me, tremendous sums of money for work that required no more effort than a game of pinochle.'
~ Ben Hecht

Ben Hecht had lived several lives before he shuffled off in 1964 at the age of 70, a reporter, journalist, playwright, novelist, director, producer and political activist. He was simply one of the most accomplished writers Hollywood ever saw, witty and insightful and quick to cut to the heart of any situation with a witty quip or startling observation. Even if he saw the work as inferior to his legitimate literary pursuits and, like F. Scott Fitzgerald, Hecht had always had the nagging feeling that he’d sold his soul to the devil by working for the big bucks that Hollywood paid him, nonetheless he leaves a legacy of screen writing second to none.