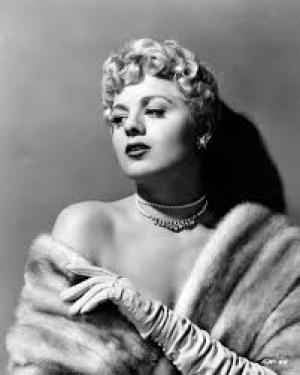 "I think on-stage nudity is disgusting, shameful and damaging to all things American. But if I were 22 with a great body, it would be artistic, tasteful, patriotic and a progressive religious experience."
~ Shelley Winters

Born Shirley Schrift in Missouri in 1920, to an Austrian immigrant father, her family moved to New York when she was 9 and family connections there soon saw her drawn into a life in theatre. She was modelling and acting on Broadway when Columbia gave her a long-term contract, but she soon found herself in bit parts in Rita Hayworth vehicles, as the eternal chorus girl, secretary or nightclub girl eye candy. Winters herself had ambitions to be a serious actress and studied acting to such a degree she was soon teaching, just as method acting was about to take Hollywood by storm.

She moved across to Universal and made something of a breakthrough in A Double Life for George Cukor in 1947. She was loaned out for bit parts in Hawks’ Red River and Siodmak’s Cry of The City and scored her first meaty part in Anthony Mann’s Winchester ’76 with Jimmy Stewart. Universal gave her star billing in two 1950 features, South Sea Sinner and with Joel MacCrae in Frenchie, a remake of Jimmy Stewart and Marlene Dietrich's classic Destry Rides Again. She was given a choice role in A Place in The Sun by George Stevens and her success, which included an Academy Award nomination, cemented her status as a serious and talented actress. During this period, she studied Shakespeare with Charles Laughton and played in A Streetcar Named Desire on stage in Los Angeles and flatted with Marilyn Monroe. She scored a great role in John Garfield’s final film, He Ran All The Way and was able to find work with inspired directors like Jean Negulesco, William Wellman and Robert Wise.

She starred opposite Frank Sinatra in Meet Danny Wilson and Alan Ladd in the Raoul Walsh western, Saskatchewan and travelled to Italy, as was the fashion at the time, to work with Vittorio Gassman, who she promptly married. She made a couple of films in England during her hiatus before she returned to Hollywood for one of the most remarkable films of the decade, Charles Laughton’s The Night of The Hunter, opposite Robert Mitchum. She proved a fine foil for Jack Palance in both I Died a Thousand Times and The Big Knife, directed by Robert Aldrich. She spent some time back on the stage and worked in Television before George Stevens tapped her for a key role in The Diary of Anne Frank, which deservedly won her an Oscar.

Winters had graduated from the sexy blonde roles of her early career, where she’d been able to play on her good looks and earthy charms, but the best roles of her life were found in the next period as A-list directors lined up to cast her. Robert Wise found a spot for her in his excellent late noir, Odds Against Tomorrow, and she starred opposite Burt Lancaster in John Frankenheimer’s The Young Savages. Stanley Kubrick gave her a seminal role in his controversial Lolita, and George Cukor cast her in his drama, The Chapman Report. After a succession of undistinguished films, she won another Best Supporting Actress Oscar for A Patch of Blue, a touching film by Guy Green that starred Sidney Poitier. She found great, smaller roles in Alfie, with Michael Caine and in Harper, with Paul Newman, but after that choice roles eluded the ageing actress.

Shelley Winters made a splash in a Roger Corman effort, Ma Barker, and fitted in easily as the ex-champion swimmer in the disaster epic, The Poseidon Adventure with an ensemble cast headed by Gene Hackman. She continued to work prolifically in every medium, from low budget horror films, to television, to stage roles and she occasionally popped up for top directors in prestige features like Paul Mazursky (Blume in Love), Roman Polanski (The Tenant), James Mangold (Heavy) and her last prestige role was for Jane Campion in Portrait of a Lady.

Shelley Winters was a singular figure in film for decades and extracted every last ounce out of an astonishing varied and rich career. She never quite managed to become a superstar but traded her ingenue looks and knowing sexuality for skill as a character actress of note as she got older. She led an equally interesting life off camera too if her autobiographies can be believed, and the earthy sexiness and keen intelligence that graced many a fine film were seemingly shared across multiple husbands and lovers. It seems Shelley Winters did not die wondering… she left a mark… well played indeed.