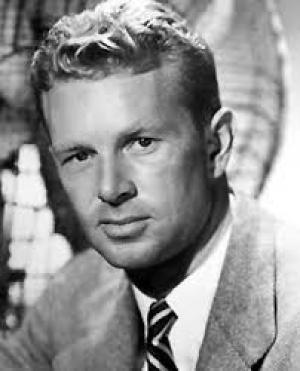 "Because, in the final analysis, an actor is only a pawn--brilliant sometimes, rare and talented, capable of bringing pleasure and even inspiration to others, but no less a pawn for that."
~ Sterling Hayden

Sterling Hayden was born Sterling Walter in New Jersey and carved a small but indelible place in the post WWII screen pantheon. Unlike other actors who fall in love with the bright lights and greasepaint at an early age, Hayden lived a full and completely separate life on the sea before his tall stature and good looks led him to modelling work in Hollywood and then to the movies. It also may explain his ambivalence to the acting profession, as he often condemned the craft and discipline but happily took the Hollywood pay cheque, a contradiction that caused him much angst. After a couple of undistinguished Hollywood films, a resultant marriage to English actress Madeline Carroll and now in his late 20’s, Hayden joined the Marines under a nom de guerre, and had one of the most colourful and decorated military careers of any ex-movie figure, winning a Silver Star.

Hayden returned to Hollywood, mostly as a means to earn quick money to buy a schooner, and his fighting with Communist Partisans during the war led to a short-lived membership of the American Communist party. When HUAC came gunning for leftists in the late 1940’s and early 1950’s this association would come back to haunt him. Hayden rose through the ranks gradually, working consistently in B films, westerns and noirs notably, as well as the odd major studio project like MGM’s Asphalt Jungle, for John Huston. In 1951, Hayden was threatened with losing custody of his children by HUAC, so the actor made the difficult choice to ‘name names’ in order to keep his young family together and to keep working.

(On 'naming names') 'I don't think you have the foggiest notion of the contempt I have had for myself since the day I did that thing . . . It's the one thing in my life that I'm categorically ashamed of.' ~ Sterling hayden

Given his athletic physique and background he became a fixture in the war film conveyor belt Hollywood gruel, with the occasional name director able to utilise his particular presence, like Robert Wise in So Big, an adaptation of an Edna Ferber novel for Warner Brothers. A couple of Universal projects materialised in the mid 50s, Take me To Town, a Douglas Sirk/Ross Hunter oddity comedy-western with Ann Sheridan, and an under-rated Noir, Naked Alibi, with Gloria Graham.  Crime Wave was a fine noir for Andre De Toth, and Hayden lined up in a rare blockbuster ensemble bit of fluff, Prince Valiant, for Henry Hathaway at Fox.

Two of his best films from the period remain the singular Nicholas Ray western, Johnny Guitar, once seen never forgotten, and Suddenly, a fine Lewis Allen film with a brilliant Frank Sinatra performance. Several nondescript pieces packed the middle of the decade before Hayden stumbled into a role that cemented his reputation, as Johnny Clay in Stanley Kubrick’s masterful heist film, The Killing. Hayden made another pile of filler projects, each at much the same level as the other until he made an under-rated western, Terror In a Texas Town, directed by maverick Joseph Lewis and written under a pseudonym by Blacklistee Dalton Trumbo.

A searching soul, sick of himself and heartily sick of Hollywood, Hayden packed up his children and sailed for Tahiti. He’d divorced his wife and won custody of the kids and talked Republic Pictures into financing the trip for a film he’d deliver. He wrote a book, Wanderer, but the film never emerged and he had to pay the money back. After some 2 years in the literal wilderness, he returned for a TV movie for Rod Serling before working again for Kubrick in the seminal satire, Dr. Strangelove. Relocating to The Netherlands and Paris he worked occasionally in smaller Hollywood projects and in a few European films before he scored two noteworthy late career supporting role triumphs in Coppola’s, The Godfather and Robert Altman’s neo-noir, The Long Goodbye.

A last gasp star studded ensemble epic for Bertolucci in 1900 was an indication of his reputation, and a nice cameo in the commercial hit 9 To 5 were amongst the last efforts he put on screen. The documentary on his life in 1983, Pharos to Chaos is essential viewing in understanding the complex, troubled wandering soul that was Sterling Hayden. Like his kindred spirit and colleague Marlon Brando, Sterling Hayden was torn between despising his craft as juvenile and inconsequential or committing to it as necessary expression and a valid art form. He despised that he sold himself out for the money and agreed that he’d taken the easy route in doing so. More than anything he beat himself up for giving in to HUAC and naming names. For a man who’d faced real danger and seen death on a battlefield, that was an act of rank cowardice for which he never forgave himself. For our consolation we have the silver flickers of a niche career where Hayden’s fine screen presence and rugged determination speaks for itself.
One of a kind.