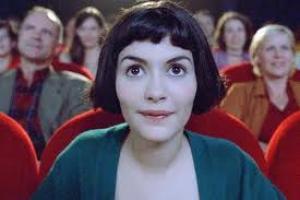 "I never made any concessions, so I am 100% responsible for my films. This makes me feel very proud." ~ Jean-Pierre Jeunet

Jean-Pierre Jeunet harnessed his capacity for brilliant and innovative visuals learned via his co-directing stints on fantasies like Delicatessen and City of Lost Children and turned them towards a sweet love story, albeit one with a dark edge. Amélie is a continuation of a favoured form in French cinema best described as 'magical realism', where everyday happenings and events take on a kind of mystical quality when placed in a certain context or examined through a dreamlike prism. Jeunet had originally envisaged the lead role for English actress Emily Watson, but when she became unavailable he had the good fortune to cast the gamine and beautiful Audrey Tautou in the title role who provides an unforgettable and luminous presence at the film's warm heart.

Amélie is born to a distant father who avoids contact with her and a mother who dies in a bizarre accident when Amélie is still a young girl. Amélie retreats into her imagination and lives a withdrawn and sheltered emotional life, although she works with other people in a cafe/bar and interacts with the co-tenants in her Montmartre apartment. Amélie recognises there is a void in her own being but rather than address it directly she focuses on the perceived problems in the lives of others and sets about to secretly fix them instead. Amélie is 'called to action' by finding a hidden box of child's odds and ends left in a secret compartment in her bathroom 40 years before, and she sets out to find the owner and return the box. The joy she finds in secretly returning the box soon sees her hooked on that feeling and she continues to play the role of 'guardian angel', but this only points to the emptiness in her own life and before long she must also confront this head on.

There is a bleakness at the heart of Amélie that belies its reputation as a souffle light confection of romance, she in fact sees herself as "Godmother of the outcasts, Madonna of the unloved". There is a terror and a struggle in the narrative that underpins the gorgeous visuals and runs a dark counterpoint to what is presented on screen as a group of alienated and dysfunctional people go about their lives. Amélie also takes on the role of punisher as she also gently tortures a nasty grocer via a series of inventive acts of psychological destabilisation. This layer of a darker shadow helps to give the piece it's dimensionality and effectiveness.

Amélie's journey is facilitated by the wisdom of the 'Glassman', a painter she can see from her apartment window. He is unable to leave his apartment because of brittle bones and has padded furniture to keep him safe. Every year for 20 years he has painted a copy of Renoir's Le déjeuner des canotiers, or Luncheon of the boating party, but he can't quite capture the elusive quality of the 'girl with the glass' in the picture.  Amélie is seen holding a glass while he expresses his frustration and eventually she will unlock the key for him as he will for her. "Seize this chance or your bones will be as dry and brittle as my skeleton" he tells her as she equivocates about following her heart. Glassman derides her "stratagems" that keep her disconnected from love, and even though "times are hard for dreamers" he knows that life without a connection is an empty experience. Glassman envies the immortality of the figures painted in Renoir's masterpiece, and understands that just as they were playing their part in the human tableaux, he must do the same.

Amélie is an affirmation of the power of empathy in humans. Amélie's destiny has been compromised by her father and his inability to show her affection, and as she brings him out of his emotionally stifled state she is also freeing herself. Jeunet frames his gentle philosophy as an existentialist would, if as he states "failure is human destiny, a long rehearsal for a show that will never play", then the point is to find meaning in the 'rehearsal' without concern for the 'show'.  Amélie is piecing together the puzzle of her own life as she pieces together torn photographs to reveal the 'mystery man' and his part in the play.

Jeunet's good fortune in finding the perfect Amélie in Tautou pays tremendous dividends on the screen. Her impish, elfish playfulness and expressive eyes convey delicate and intimate overtones and elevate the rendering of the character to something beyond the straightforward. Tautou's grace and style rides seamlessly across the divide between her sugar sweet dream world and the seediness of her boyfriend's job in a porn shop. She is the unifying force upon which the film turns and she carries it off beautifully. Jeunet people's the support cast with memorable faces and quirky choices, but all work superbly in building a convincing, if skewered, version of Montmartre.

Jeunet cast Tautou in his beautiful A Very Long Engagement after the triumph of Amélie, and in its own way it's as memorable an experience. In many ways Jeunet is the natural inheritor of Francois Truffaut or even Jean Renoir's deep humanism, albeit from a slightly askew perspective. Magical Realism has seldom been so well done or looked so gorgeous as this deeply humanistic look into sometimes unseen, small pleasures available to all, and into the eternal and elusive mystery of love. Tres Bon indeed. 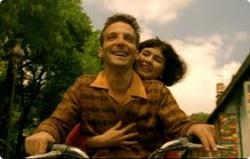 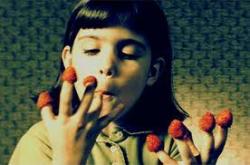 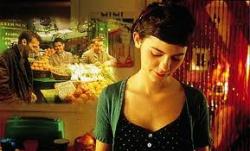 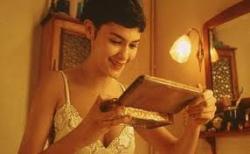