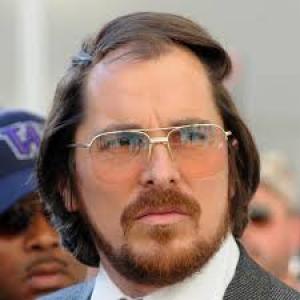 David O. Russell has managed to carve a solid reputation as a director of note in the early part of the new millennium, but no matter how many great films he makes in the future it’s safe to say American Hustle  will loom large in his legend. The film is a fine satiric insight into the nexus between crime and punishment and the thin dividing line between the two, as characters on both side of that divide scramble for their slice of the American Dream. Russell has made a specialty of examining quirky characters, just on the fringe of the mainstream but seemingly aspiring to be let in, and in successive hits The Fighter  and Silver Linings Playbook  he’s made something of a niche for himself in that regard in modern American cinema. Both of those films won truckloads of awards and American Hustle,  while it lost out at Academy level to the admittedly fine period drama 12 Years a Slave,  it was in every way a better film than McQueen’s worthy opus and can be considered very unlucky to have missed the Best Picture gong.

Irving Rosenfeld (Christian Bale) is a con artist who owns a string of laundries as fronts for his various scams. A shared love of Duke Ellington leads him into a relationship with Sydney Prosser (Amy Adams) who takes to the criminal life with unnatural ease. The pair set up an elaborate scam via a loan racket under the business name London Associates and Sydney impersonates an aristocratic Englishwoman named Lady Edith. The racket is busted by Richie DiMaso (Bradley Cooper), an up and coming FBI agent who dreams of bigger fish frying in his pan. Richie cuts a deal with Irving and ‘Lady Edith’ which grants them freedom in return for their help in running a scam to bust local government officials. The prime ‘mark’ for the scam is a New Jersey mayor, Carmine Polito (Jeremy Renner) who has the best intentions in regard to looking after his constituents but is not above chasing dirty money to get his way. Irving and Edith reluctantly agree but soon inter-personal relationships complicate an already delicate arrangement and things do not pan out as planned.

Russell begins the ensemble character study with a fine sequence involving a comb over that would make Donald Trump blush, as Irving prepares for battle like some kind of medieval Samurai. The story turns on trust as soul mates Edith and Irving begin to doubt their connection and devotion to each other as the FBI man drives a wedge between the pair to attain his goal. The notion of cross and double cross keeps everyone on edge as Irving feels he may in fact be nothing more than a common mark for Edith, the kind of easy sucker he despises. Russell uses the intimate and small scale moments, the quietude of the personal, ‘micro’ moments to counterpoint the bigger and broader macro, or political points the film contains.

The era that the film examines is the immediate post-Watergate period of a traumatised America, one where the old certainties were shaken to the core. Irving voices the concerns in a darkly comical aside, implying that uncovering the corruption of Carmine will be the last straw for Middle America to assimilate in a series of blows, “The country has just got over Watergate and Vietnam, and now this”?  Of course the tacit corollary is that they not reveal the corruption, a conceit that would suit Irving down to the ground. Morality is not seen as the driving force of the sting, rather the personal aggrandisement of Richie. In a line dripping with resonance for modern viewers Irving comments on the capacity for raising funds legitimately as opposed to corruptly, “bankers will only put money in the game when they can make insane profits”,  plus les choses changent?

Russell’s genius is in the beguiling amalgam of the l’amour fou  scenario woven into a crime plot that finds and strains several levels of credulity but retains a fine sense of the absurd. Russell opens with the title card, ‘Some of this actually happened’, which nicely sets the tone for what follows, given we don’t know how much of the shaggy dog story to believe. Like director George Roy Hill before him, who originally had ‘Not that it matters but…’ before the Butch Cassidy and The Sundance Kid  opening card which read ‘Most of follows is true”, Russell intuitively knew that just how much truth he salted into the tale was irrelevant, the joy was in the ride and the execution, a feat he managed to pull off with dazzling élan.

Russell is proving to be a master in his handling of talented ensemble casts, and in American Hustle he corrals an A-list roster of superb actors. Christian Bale, Jennifer Lawrence and Amy Adams deliver career best turns in wonderfully written parts with Bradley Cooper and Jeremy Renner not far behind. Robert De Niro brings his weight and gravitas to a small part and Louis C. K. scores well with a memorable FBI controller with a fishy story. As fine as the main players are it is Bale’s film, he is mesmerising as Irving and the fact the Academy overlooked his performance is an indictment of their judgement. Adams and Lawrence are both brilliant, sparking off and playing in tandem with Bale’s edgy verve, but both actresses benefited mightily from Bale’s artistry and generosity. It is easily the best thing Renner has committed to celluloid in a career that currently would kindly be described as uneven.

Russell judges the pacing and the intrigue to a nicety, and handles the period detail with humour and wit, and the hair styles alone are a roller-coaster of hilarity. The art direction is a triumph of eye catching kitsch and the soundtrack is witty and assured, making use of several iconic seventies hits. Russell dusts off some underused gems too, particularly 10538 Overture  from ELO, I Saw The Light  by Todd Rundgren, Led Zep’s Good Times, Bad Times  and How Can You Mend a Broken Heart  by The Bee Gees, from their superb and under-appreciated Baroque Pop era rather than the over-used disco tosh of Saturday Night Fever.  Renner and Bale join in a rousing sing-a-long of Tom Jones’ corn-fed classic Delilah,  and Russell imbues the rest of the soundtrack with the same unerring instincts that have guided Scorsese in his song choices, adding a crucial verissimilitude to proceedings.

David O. Russell has managed to master the art of the ensemble piece with American Hustle,  proudly taking his place in a long line of brilliant American directors, like Robert Altman and Woody Allen in recent times, who displayed the same wit and verve in that area. Russell also adds the rare ability to capture the grit and spirit of place, a talent that masters like Scorsese and Sidney Lumet had in spades, giving the film a tasty authenticity of tone. Russell beautifully juggles the demands of multi-ethic characters, suggesting the melting pot of spices that adds taste to the American stew, all of them lining up for their portion, their slice of the Dream, give or take some legal niceties.

With American Hustle  Russell has created a modern American classic, a subtle satire that evokes the spirit of George Roy Hill’s delicious con-fection The Sting,  a sweet ride that also contained charismatic star turns to propel and delight. Like some cinematic magician, Russell conjures an epic feel with characters full of nuance and bite and yet they are not overwhelmed by the scale of the canvas, and he never smothers the quirkiness and heart of the central characters involved, and that is one impressive con. As for the American Dream, Russell seems clear, trust no-one. 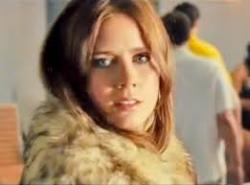 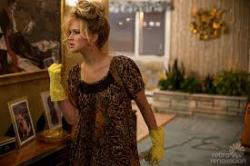 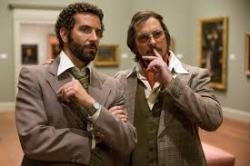 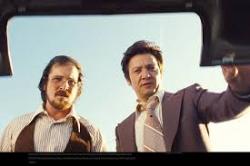 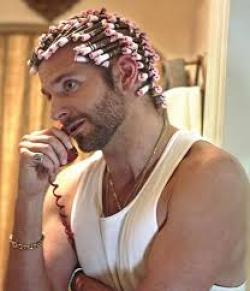