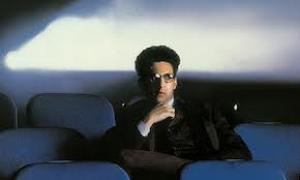 In the middle of being mired in the complexities of 'Miller's Crossing' in 1990, what could be understood as an episode of writer’s block slowed down the progress of Joel and Ethan Coen. The brothers decided to write about the problem and came up with the wonderful ‘Barton Fink’, "Barton Fink sort of washed out our brain and we were able to go back and finish Miller's Crossing". The Coen's completed the script for ‘Fink’ and then returned refreshed to ‘Miller’s Crossing’, proceeding to film them one after the other. Filmmaker’s suffering artistic difficulties or a crisis of confidence and using the issue as a creative tool is not an unusual event, most famously evidenced by Fellini and his ‘8 ½’ in 1962, where he simply filmed a version of himself under pressure to come up with the next ‘genius’ project. The Coen brothers moved seamlessly from the gangster period piece of ‘Miller’s Crossing’, to the period of Hollywood in 1941, where their central character experiences many of the frustrations Preston Sturges mined in his superb ‘Sullivans Travels’, made in the year 'Barton Fink' is set.

Barton Fink (John Turturro) is a hit New York playwright, and his sudden notoriety and good notices comes to the attention of Hollywood and Capitol Studios, who offer Barton a contract. The tortured writer, dedicated to creating a ‘new’ theatre, one of and for the ‘common man’, decides to take the huge payday and head west, to the not so salubrious surrounds of the Earle Hotel. Once ensconced, Barton meets the studio head, Jack Lipnick (Michael Lerner) who tells him “At Capitol, the writer is king’, before assigning him to a standard ‘B’ picture, a "Wally Beery wrestling flick". Barton struggles with the assignment, hitting a wall, until he seeks help with other staff writers, only to discover one of his idols, Bill Mayhew (John Mahoney) is also contracted to Capitol. Bill has a drinking problem and his ‘secretary’, Audrey (Judy Davis), a darkly beautiful Southern Belle, takes a shine to Barton and attempts to help him navigate Hollywood’s shark infested waters. Barton spends lonely days at his typewriter at the Hotel Earle, occasionally joined by his next door neighbour Charlie (John Goodman), who seems to be a version of Barton's mythical 'common man'.

'Barton Fink' managed to comment on artistic pretension, the commoditisation of art and the nature of obsessive and compulsive behaviour, as well as the solitude of the writer. Barton is a writer with a mission, and has convinced himself of the importance of his own work, and of the capacity it has to change society. The Group Theatre ethos, which formed in the 1930's in New York, came out of a socially conscious movement of politically leftist writers and artists, confronted with the aftermath of a system that had led to the Great War, followed closely by the Great Depression, so not surprisingly they were keen to find another way. A large body of Americans viewed Communism as a potential solution, and many artists signed up to the party against this background, much to their chagrin some years later during the HUAC witch hunts and blacklist. The full dimension of the atrocities in Russia under Stalin were not yet widely known, and the idea of a collective effort to solve the nations woes was the philosophy that underscored Roosevelt's recent New Deal. What is deeply ironic is Marx assumed it would be a middle class and educated population like America that would evolve to Communism first, not the 90% peasant class and largely illiterate Tsarist Russia. The gap between the intelligentsia, as represented by Barton, and the 'peasant' class as represented by Charlie forms the basis of the satire, and the final affirmation of Barton's narcissism is in Charlie's declaration when Barton asked him why all the death and destruction, "because you don't listen"!

The Coen's achieved a marvellously authentic evocation of the era and convincing artistic patina with 'Barton Fink' by basing Barton on a real person, albeit with some liberties, a license they also applied to the Mayhew character. They settled on modelling Barton on famous New York Group theatre alumni, Clifford Odets, darling of the New York theatre glitterati in the late 1930's. Odets made a sensational splash with the socially conscious 'Waiting For Lefty', starring his friend and then actor Elia Kazan, before writing 'Awake and Sing', and 'Golden Boy' and heading west for Hollywood. The Bill Mayhew character is based on William Faulkner, with a touch of Scott Fitzgerald thrown in for good measure, and is the classic and stereotypical southern American, alcoholic writer, slumming it in Hollywood for the money. Lipnik is a caricature of Jack Warner, down to the fake military uniform he had Warner Brothers wardrobe department make for him at the start of WWII.

A key part of the success of 'Barton Fink' is the quasi-nightmarish quality of the key set, the Earle Hotel, which substitutes for a Dante's Inferno ambience as it's hellish qualities gradually reveal themselves. Barton finds himself in a surreal and unsettling hotel, run by the seedy and obsequious Steve Buscemi, and peopled with invisible guests who leave their shoes out at night. Barton's only contact with another guest is with Charlie, to who's pain and troubles Barton remains oblivious due to his own self centred nature. The Coen's throw in disturbing grace notes, in the peeling of the wallpaper, the distraction of a mosquito, the noisy adjoining rooms, all amplified in Barton's heightened state of perpetual anxiety. The only symbol of calm and escape is the girl on the beach in the small painting on Barton's wall. The Coen's comment ironically on what she represents, the notion of a 'dream girl' in the dream factory, in the denouement, as the same girl walks past Barton on an actual beach and he asks her if she's in the movies, she replies, "Don't be silly". It's all a dream, or a nightmare, because as usual in a Coen feature the line is blurred.

John Turturro delivers a brilliant characterisation as Fink, nerdy and nebbish and annoying, it's a role an actor dreams about, and he revels in the possibilities. John Goodman reveals great depth with his multi-layered rendering of Charlie, a character that has a lot going on internally, and he covers all aspects of the difficult transition from nice guy to maniac. The police mug shot of Charlie is a particular jolt. Both actors have since become staple Coen performers. Michael Lerner's brilliant cameo as the studio mogul Lipnik is a showstopper, and his manic intensity and bravura playing lifts the piece every time he appears. The Coen's have great fun with the concept of Lipnik buying "that Barton Fink feeling", as Lipnik says, "you're Barton Fink so I assume you have it in spades". A while later he berates Fink with, "Who do you think you are? I got 20 writers who can give me that Barton Fink feeling".

The Coen's went on to stay in period and explored the screwball genre with 'The Hudsucker Proxy', in their next piece, a better film than is generally given credit for, but one the public rejected nevertheless. 'Barton Fink' remains an early career high point, managing to be a comedy and yet not be overly funny, to be a character piece of extreme characters who still retain a level of empathy, the surreal is somehow real, in short to be all the quirky contradictions that a Coen film has come to be identified with. The Coen's fractured and memorable take on old Hollwood created their version of the old showbiz joke... 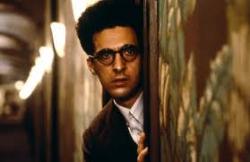 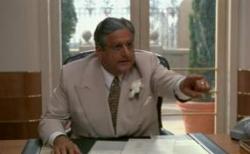 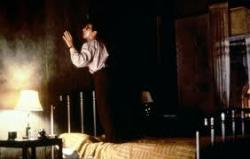 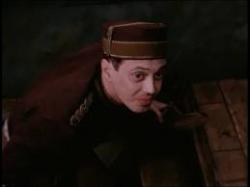 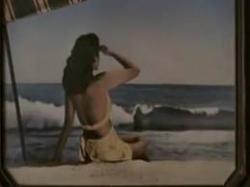 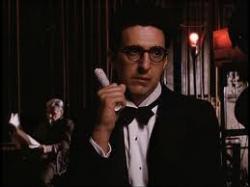