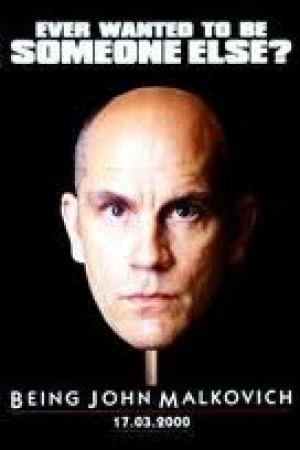 If a compelling case needed to be made that a writer can in fact be the 'auteur' of a film then Charlie Kaufman is exhibit A. 'Being John Malkovich' was directed by Spike Jonze in close collaboration with Kaufman and the work is of such stunning originality and freshness that it, together with the subsequent Kaufman projects like 'Adaptation', 'Eternal Sunshine of the Spotless Mind', and 'Synecdoche, New York' could almost be considered a sub-genre within themselves. Jonze came across the script via his then father-in-law Francis Ford Coppola and proved to be the ideal visual collaborator for Kaufman's twisted and surreal set up's, in contrast with Kaufman's disappointment of being shut out of George Clooney's still excellent 'Confessions of a Dangerous Mind'.

Craig (John Cusack) is a puppeteer and Jonze opens with a beautifully detailed sequence involving an emotionally tormented puppet version of Craig being manipulated by the real Craig in a 'dance of despair and disillusion', breaking up his puppet room and collapsing in a heap. Lotte (Cameron Diaz) is his homely wife who puts all her attentions into her collection of animals and insists he get a real job, so he finds an interview on the 7 1/2 floor of an office block and starts life as a filing clerk. There he becomes obsessed with a pretty co-worker Maxine (Catherine Keener) and he also finds a supernatural portal that lets him inhabit the mind of famous actor John Malkovich for 15 minutes at a time. Maxine becomes his partner in selling access to the 'ride' at $200 a pop, and Lotte finds an unexpected twist in her experience of the portal.

Kaufman invests his characters with varying degrees of 'intellectual' intelligence but the common denominator is that their emotional intelligence is the defining and driving factor in the way they find meaning and relate to the rest of the world. Maxine and Lotte are both women who think they know themselves and are strong and assured until an emotional experience knocks them into another way of seeing their life. Craig longs for something to feel and can only express his frustration with reality via the fantasy world of his 'dolls'. Craig offers an achingly sexual version of the beautiful medieval romance between Héloïse and Abélard as a street puppet show, expressing his own dissatisfaction at the void in his own love life and offending passers by at the same time. This is Kaufman in microcosm, weaving a serious intellectual intent at one end and deflating it's pomposity at the other, and in a way his entire ouevre can be seen as keeping these two points of tension in balance. "I think, I feel, I suffer" says Craig.

Key to making this whole "metaphysical can of worms" work is the wry humour that Kaufman invests into his script. Cusack extracts the maximum amusement from his intense and fractured Craig, as he bounces from one bizarre happening to another, taking it all in his stride and trying to make it work for him. Kaufman pricks the pretensiousness of the art world with his lampooning of the Jeff Koons type 'happening' of a giant puppet hanging from a bridge to the 'Héloïse and Abélard World Tour' of the all conquering Malkovich and using his life sized 'Craig' puppet to dance Swan Lake. Charlie Sheen and Sean Penn both have funny cameos taking the piss out of themselves and their profession. Nothing is off limits to Kaufman as he shoves Craig down the rabbit hole to confront issues of identity and meaning, or as he puts it, "the nature of self, the existence of a soul". Kaufman's decision to have Craig inhabit Malkovich, to "be inside anothers skin" and control him like a puppet, including having him perform the 'dance' as Malkovich is a great way of bringing Craig's worlds together.

The other key factor in the success of the film is Malkovich himself, and his persona of art-house icon, dedicated artiste and effete modern man. Thankfully Jonze and his producers (including REM's Michael Stipe) resisted the requests from studio executives to tamper with the choice, "why can't it be Being Tom Cruise?", one mind numbing suggestion, itself a particularly arch Kaufman-esque joke. Malkovich is committed and brilliant, his descent into Planet Malkovich particularly is priceless, "I have seen a world no man should see", and the subsequent elevation to world renowned puppet master is oddly convincing.

'Being John Malkovich' suggests a magical realism found in many modern French films, particularly those of Jean-Pierre Jeunet, part Alice in Wonderland, part post modernist, deconstrucionist fairy tale. Kaufman is able to broach the big existentialist questions and yet remain slightly aloof from so lofty an examination by the distancing effect of comedy. In the same way the French poetic realists knew you don't unlock a deeper understanding of reality by showing reality, it seems Kaufman is the inheritor of that meme and also understands that oblique angles often hint at a deeper psychological truth about meaning, identity and love in ways that address a deep human yearning that speaks to the ineffable and the trancendent. 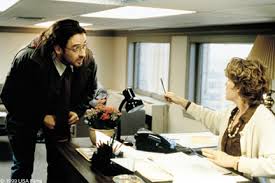 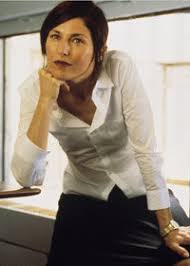