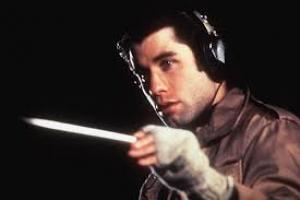 "Every edit is a lie" - Jean-Luc Godard

Noah Baumbach interviewed Brian De Palma for the excellent Criterion release of his 1981 film Blow Out, and the only mention of the word Kennedy is in relation to De Palma's JFK assassination fixation? The Night that Edward Moore Kennedy drove off the Chappaquiddick Bridge', might have been a pithy title for a country tune, but it would not elicit smiles from the family of Mary Jo Kopechne, of course in Blow Out  De Palma has the girl in the car with the presidential candidate survive the crash. Smart guy, as maybe the focus on that scandal would have sunk the film, produced at a time with a Democrat in the White House? Either way the film did not do well, the downbeat ending only survived because the producer had become a studio head by the time of the release and couldn't be over ruled by an unhappy executive corp. De Palma took his lead on the topic from classic films, Antonioni's Blow Up,  from 1966 and Coppola's The Conversation,   from 1974, and stand's up well in that exalted company. De Palma cast the then white hot star John Travolta in the lead, coming off the mega hit Saturday Night Fever,  from a couple of years prior, and it proved to be one of the best uses of the talented actor, who often managed to find properties that were not commensurate with his abilities.

De Palma's premise is the piecing together of a puzzle, where Jack Terry (John Travolta), a sound man working in low budget horror films discovers he's accidentally recorded evidence of a political assassination. Working at night to record effects and atmospheres he witnesses a car careen off a bridge and dives in to save one of the occupants, a young woman called Sally (Nancy Allen). The driver of the car is a Governor and presidential hopeful, but he dies in the accident, the result of a car tyre blow out according to the authorities. Jack is asked to keep quite about the girl, for the sake of the governor's family, but soon realises he's in danger if he keeps the truth to himself. He convinces Sally of this, but finds Sally had more to do with the set up of the accident than he'd thought. Soon a 'clean up' man enters the frame, in the guise of the 'Liberty Bell' serial killer, and both Jack and Sally are in mortal danger.

The scenario could only work in a post Kennedy assassinations, post Watergate era, where the counter culture mentality had some serious betrayals of government trust issues that concomitantly also fed into any 'conspiracy du jour' theories. Before this the idea that government cells, or secret groups, routinely killed for political ends would have pushed a film into fantasy territory, it was usually enough to smear a candidate with his moral failings, not assassinate him. De Palma now had 'believability' on his side, and he keeps the piece anchored in reality by having his main character play it low key, as an agreeable guy, caught in something that disturbs his sense of morality, not as some 'conspiracy' prone nut. Travolta does well in the role, shading it with just the right rhythms and nuance as he grows from a disinterested tech-geek, to a mobilised active investigator. Nancy Allen also keeps her sweet airhead character endowed with just enough hint of morality for the switch to work in her moving from the side of the 'conspiracy' to the side of right.

De Palma put these political ruminations through his 'Hitchcock-ian prism, less overtly than with the previous Dressed to Kill,  but able to evoke enough of the master in the handling of the suspense elements, and in the utilising of a big scale physical feature in the finale, i.e The Liberty Bell, where Hitch used the Statue of Liberty, or Mount Rushmore, et al. The filming was helmed by his frequent cinematographer, Vilmos Zsigmond, although oddly a theft of some master reels saw the big parade sequences re-shot by László Kovács, as Zsigmond was unavailable. Thematically the film also explores the relationship between media image and 'truth', it's not enough for Jack to offer his sound recording as verification of what he witnessed re- the gunshot, as sound can be manipulated to 'lie'.

The mechanics of filmmaking, and of editing are a large part of how De Palma reveals the viewer is always being manipulated, whether they realise it or not. Jack seeks out the film to match his sound, and this compels him into an underworld of corruption and danger. His motives are personal in regards to Sally, as he now wants to save her 'completely', as saving her life in the river did not 'save' her as a human, and her redemption is available by helping Jack put things right, and maybe find a future for themselves beyond that? De Palma cleverly bookends the piece by setting it in the most manipulative of film genre's, low budget horror films, where the missing 'real' scream that was needed to bring 'authenticity' is finally, tragically and ironically found, the audience will remain blissfully oblivious however, but Jack will be haunted forever.

De Palma was part of the pack of film school brats who made up the Hollywood Renaissance (and an argument could be mounted that the 'era' more or less ended here ) and in fact he was one of the spearheads, making features from 1968. Like his other Hollywood new wavers he was heavily influenced by the French Nouvelle Vague  aesthetic, and a lot of his output lines up with Jean-Luc Godard's maxim that there can be no non-political filmmakers. De Palma's politics were sometimes overt, as in this film or Casualties of War  or Redacted,  but were always there to be found, even in such big blast 'entertainments' like Scarface  or The Untouchables.  DePalma's career might resemble a roller coaster ride, but with Blow Out  he was definitely at the top of the arc. 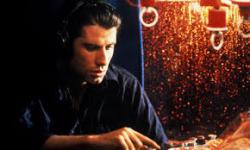 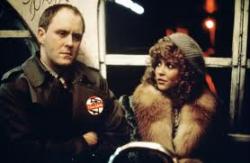