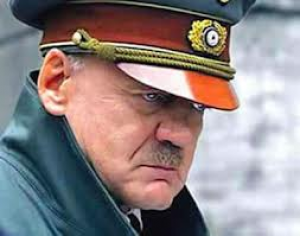 Facing up to a difficult past

German director Oliver Hirschbiegel and German screenwriter and producer Bernd Eichinger collaborated on what may well be the definitive filmic realisation of Adolph Hitler in the remarkable 'Downfall'. Taking primarily as it's source material the memoirs of one of Hitler's secretaries, Traudl Junge, and historian Joachim Fest's 'Inside Hitler's Bunker', the film investigates the actions and events of the last two weeks of the war, the effect on the people involved and on the wider Berlin populace. German actor Bruno Ganz took the lead role and made every other portrayal of Hitler by German or Non German actors redundant in his brilliant and layered characterisation of the decaying megalomaniac. Even in 2005, some 60 years after the events portrayed, there was controversy in Germany towards the project, and it's a measure of the filmmakers fortitude that they faced their own history so directly and evenly.

The narrative commences in 1942 at the infamous Wolf's Lair, where Hitler is interviewing for a new secretary, and he settles on Munich girl Traudl (Alexandra Maria Lara). It's also a subtle reminder that even an evil tyrant like Hitler still ran a bureaucracy. We jump forward to 1945, and as the empire fractures Hitler is joined by his senior henchmen, Himmler (Ulrich Noethen) and Speer (Heino Ferch) amongst them. Hitler attempts to run the war from the bunker under the Reich Chancellery, and must assuage the fears of his staff, that mainly stem from the fact the Russians are due to be the first of the enemy to enter Berlin. Himmler and many others were urging the Fuhrer to leave Berlin, but he determines to stay, instructing Speer to instigate a policy of 'scorched earth' prior to the enemy's arrival. Goebbels (Ulrich Matthes) is soon the only member of his inner sanctum who stays in the bunker, and in very quick time they are discussing different ways of committing suicide as the end approaches.

Hirschbiegel eschews a melodramatic line of investigation, favouring a docu-realism technique that captures the banality contained within this extraordinary event. Secretaries sneak away for a secret ciggie or to walk Hitler's dog, the Goebbel children sing for Uncle Hitler, the Fuhrer enjoys a meal with the cook and secretaries, Eva Braun admits to kicking the dog out of jealousy, all small moments woven within a grand canvas.  The Russians lumber forward and a father chides his 12 year old son for joining the frontline, begging him to come home. Doctor's struggle to deal with the dead and injured as artillery rains down on the streets, and reprisals are carried out by soldiers who see betrayal and insurrection around every corner. Tension and fear build inexorably as Speer comments to Hitler when asked if he should leave, "You must be on stage when the curtain falls". Undoubtedly Hitler had one eye how history would view his final days in deciding on the course he did.

The events are viewed mostly through the eyes of the lower level participants, Traudl and the doctor who assists when his superior is summoned for the last details of the Fuhrer's suicide. Traudl realises she's in too deep, "I made a mistake" she admits, in taking the job, but still struggles with the full dimension of her employers hate fuelled agenda . She is privy to Hitler's poisonous philosophies and the script details them at some length. Hitler fears the "inferior" Germans will be the only one's who survive, as all the worthy ones are dead already. He says he is most proud that " I cleansed the German land of Jewish poison", and rants that "compassion is a primal sin against nature". He despises "weakness" and his contempt for ordinary Germans is seen in his instructions to Speer to destroy as many assests as possible, an action that would send the country back to the middle ages, but is ignored by Speer in a brief moment of clarity amidst madness.

Ganz's Hitler is no dead eyed monster, he's a man in every way, and this provided pause for thought from those not easily able to accommodate this view of a 'human' Hitler. When he hires the Munich girl perhaps he's reminiscing about his political triumphs there in the '30's with Neville Chamberlain, or even the early days of the Nazi Party and the struggles for legitimacy that occurred there? Either way Ganz invests his character with an awareness of this human dimension, making the monster even scarier when we are forced to realise he truly did spring from our ranks. Hitler comments wryly when he asked to supply more cyanide capsules for his staff, 'Thankfully Himmler left me well supplied". Ganz milks every drop from the possibilities such a flawed and complex character represents for an actor of his calibre, and delivers an unforgettable and mesmerising portrayal, that includes 'the scene', the one that went viral as an internet parody, nonetheless a tribute to his performance and it's effectiveness.

A central tragedy that Hirschbiegel deals with is the fate of the Goebbel's children at the hands of their own mother, "they are too good for what's to come" she says. "Papa" Goebbels stands impotent outside the door as his knowing eldest daughter calls out for him, while he simultaneously condemns the German people for "giving us a mandate", therefore deserving of the fate that befalls them. Traudl can hardly believe what is unfolding as all around her are either planning suicide or planning escape. The similarities between the Hitler cult and a religious cult cannot go unremarked. Only blind allegiance from the truly deluded could lead to the decisions that many were prepared to take, and Hitler actually said he was "doing God's work". Hirschbiegel knows that to view Hitler as an anomaly is to negate the facts, that he was charismatic, charming and a force of nature, how else could he convince so many others to follow his evil plans? Hitler was like so many despots, drunk with power and deluded as to his own abilities, but only a pliant and complicit population allowed his brand of dark nationalism to flourish.

Militarism and Nationalism of any kind are a dangerous mix, but when combined with the kind of xenophobic hysteria directed against the Jews it led to one of the most disgusting times in modern history. Hitler didn't evolve from a vacuum, the ground was sewn by centuries of Church sanctioned anti-Semitism, he merely exploited that situation to his own megalomaniacal ends. The film has the aura of an epic production, even though most of it takes place in the claustrophobic confines of the bunker, it feels remarkably authentic, the streets of Berlin suitably demolished and the populace torn and frayed. 'Downfall' is a compelling film at every level, and a brave documentation of a nation in the thrall of an evil personality cult.

nb. Every time I see 'Downfall' I'm reminded of a little old woman I met in a DVD store in Surry Hills in Sydney circa 2007. She was German and very knowledgeable about cinema, we got to talking and the subject of the war came up, so I asked her where she was during the war, "In Berlin", she replied, "Shite", said I, "hopefully not in 1945"... "yes" she said, "I was a secretary for the Luftwaffe". So far away, yet so close. 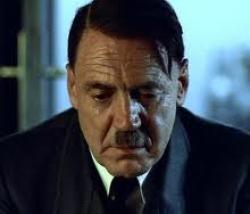 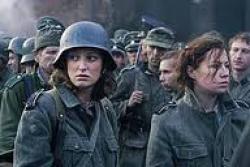 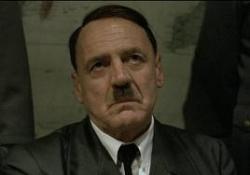 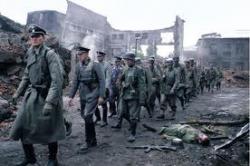 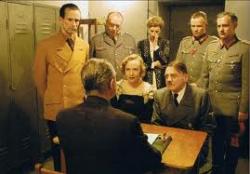