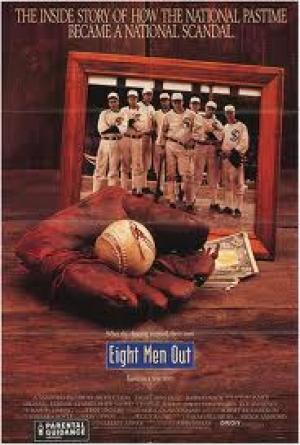 Say it ain't so Joe?

Independent writer-director John Sayles, who hit a home run with his superb debut feature Matewan,  turns his steely gaze upon the scandalous 1919  'black sox' World Series of Baseball, where a Chicago team that was rated one of the best ever 'fixed' the result in order to make far more money than the relative pittance they were paid by the hated franchise owner Charles Cominski. Sayles uses as his source material the authoritative book of the same name by Eliot Asinof, adapting it to a screenplay with the help of the author and using it as a metaphor for unfair labour practices and of 'capital' not paying a fair share to the people who help generate massive profits for corporate America. Baseball, as America's pastime is the perfect vehicle with which to deliver a timely reminder about equity in 1988 as executive remunerative packages outstripped average wages by a factor of about 50, a trend which has continued into the new millennia as they now stand at 400 times the average wage. Sayles understood capitalism would compromise any product, even in supposedly more innocent times and even use the 'sacred' sport of the nation, in order to increase profits.

The atmosphere of post 'Great War' America is perfectly captured as a couple of young scamps manage to buy tickets to the bleachers for the latest White Sox game, so they can catch a glimpse of their heroes. Amidst scenes of a press pack hanging on the words of the team owner Caminski (Clifton James) speculation is flown of divisions in the team, heavy favourites to win the forthcoming World Series against the Cincinnati Reds. Caminski dismisses the reports, but simultaneously we see players openly rebelling against the tightfisted management. Complaining about not getting a 'living wage' the players are brought champagne for their winning season celebration courtesy of Caminski, the champagne is flat.  Chick Gandil (Michael Rooker) is connected to several underworld types, not unusual for a sports figure then, or now for that matter. Baseball, as with other sports was rife with small corruptions, players taking exotic side bets to make extra money, but the scale of the World Series fix was unprecedented.  "You don't play the angle you're a sucker"  according to Gandhil and he schemes to bring in other players, figuring he'll need $70k upfront to finance the scheme. Against a backdrop of workers striking and a country coping with difficult times some of the players agree to sign up to throwing the World Series, mostly out of dislike of Caminski as much as the money.

Various underworld types compete to provide the money for the fraud, and big shot crook Arnold Rothstein (Michael Lerner), a cynical numbers man certain that ecerything has a price becomes a central player as Gandil continues to compromise the team. Chief amongst the targets is star pitcher, Eddie Cicotte (David Strathairn) the key man in any game and essential if the plan is to work. Eddie is dismissive initially, refusing to get involved, but when Cominkski stiffs him on a promised bonus he changes his mind.  With Eddie on board another pitcher signs on and young Buck Weaver (John Cusack) is made an offer, and attends a meeting of corrupt players, but refuses to commit, also incredulous that the group claims to have star player 'Shoeless' Joe Jackson (D.B. Sweeney) in the fold. As with most sports fixes the betting tells the tale and two pro sports writers become suspicious when huge bets placed on the Reds lowers the White Sox odds. Ring Lardner (John Sayles) is a respected writer and is close to the team, and he directly challenges Eddie, who denies the fix is in.

The Series starts and it's readily apparent to the experienced eye that many White Sox are under performing. The gangsters start to short change the players, who foolishly got little money up front, and when a third pitcher who is not in the scheme is given game time the Sox actually win games and jeopardise the deal. The mob boys soon have the pitcher's wife threatened with death and he stops trying to win too. The series is lost and journalist Hugh Fullerton (Studs Turkel) starts investigating what he feels was a dirty series. Eventually some players confess, including Eddie and Joe, and the matter goes to trial, with Buck fiercely protesting his innocence. The confessions mysteriously disappear and due to the Sox's popularity the jury finds them not guilty. Cominski, in the meantime, and with the help of other franchise owners has appointed a new Commissioner of Baseball with wide ranging powers and a life tenure, an ex Judge Kenesaw Landis. Landis bans all of the eight men who were acquitted from the game for life.

Trust is a hard won commodity, and Sayles has the young boys who idolise the players as the touchstone victims of that compact, one of the boys saying simply to Joe Jackson at the trial "Say it ain't so Joe".  Sayles uses this morality play as a skein with which to weave an intricate understanding of greed and corruption in all it's forms. The cynics of the world continue to play on the naiveté of the suckers, Rothstein berates an underling who doubts his tactic, a former world champion boxer, "Ain't nothin' can take that away from me",  he replies, but Rothstein sees no value in the claim, and can't respect the old former fighter who has fallen on hard times and is in the gangsters pocket. The baseball team is a microcosm of a wider society, made up of people who are bright and not-so bright, who have scruples and lack scruples, some are superficial and some have depth, etc, and to invoke Jean Renoir 'everyone has their reasons'. Sayles rejects a simplistic or polemic approach, as plainly some of the players were simply corrupt, but the structure of the business, where players who generated huge support and sums of money for the code were effectively frozen out of the profits was the key factor in the men 'striking' in a sense, or withdrawing their 'labour'.

As the world modernised in the post industrial age, people everywhere were striking for better pay and conditions, and  in that environment to deny any group the right to organise as a collective was short sighted in the extreme, ultimately Kaminski paid a price for his corporate greed, and baseball itself was stained by the actions of men ripe for exploitation. Trust in a fair contest in the sporting world is it's currency in trade and once that's lost it's almost impossible to bring it back within a generation. The event is nearly 100 years old, the ripples still reverberate, but baseball players now are millionaires and well paid by any standard. The same can't be said in wider society. 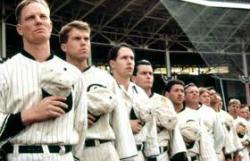 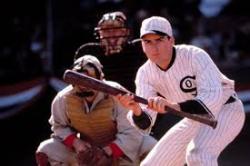 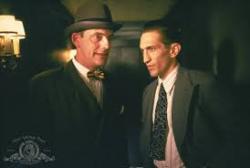