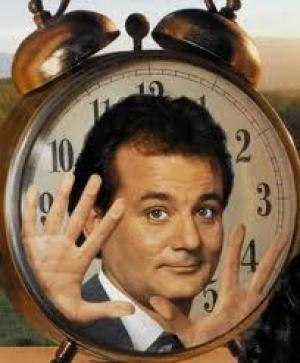 Harold Ramis co-wrote and directed this sweet-hearted affirmation of the redemptive and transformative power of love and humanity to lift people above the ennui and tedium of everyday life. The film revolves around a time loop, where the central character of Phil Connors (Bill Murray) experiences the same day repeatedly, the Groundhog Day of the title. The original script, written by Danny Rubin, saw Ramis alter several key elements, significantly making the Bill Murray character go through the time loop alone, instead of with the Andie McDowell character. Rubin's story also opened with Phil in the midst of the dilemma, but Ramis imposed a pre-story to give it a stronger context. Ramis cast his 'Ghostbusters' co-star Bill Murray in the lead role of the Pittsburgh weatherman, and Andie McDowell took the role of Rita, his producer. The crew shot the piece in the town of Woodstock, standing in for Punxsutawney, the home of the real groundhog festival.

Phil Connors is a narcissist par excellence, a smarmy and superior TV weatherman, sentenced once a year to go and cover the Groundhog festival in Pennsylvania. The festival turns around a groundhog coming out from   winter hibernation, and if it sees it's shadow it means another six weeks of winter, if not an early spring. The cynical Phil wants to escape the rural backwater as soon as he can, but after filming his piece, a blizzard inexplicably sets in and strands the crew for another night. Phil wakes up in the B&B the next morning, to find he's reliving the same day over again. At first, Phil is appalled, and then warms to the idea as he uses the unique situation to feed his desires, mostly for sex and food. He eventually tells Rita (Andie McDowell) about the problem, and she advises him to improve himself. Phil falls in love with Rita and sets out to win her love in return.

The story is the perfect allegory for the emptiness of a modern society obsessed with immediate and conspicuous self-satisfaction. The central character is part of the vacuous celebrity weatherman culture, he mocks Rita's Sir Walter Scott poem by saying he thought it was Willard Scott, setting the tone for high versus low culture. "People are morons" is Phil's mantra, to which he sees himself as an exception, and therefore their exploitation his logical right. Phil uses the unusual turn of circumstances as an opportunity to exploit, but the only lesson he learns is the impossibility of being satiated when you demand the things that cannot bring true and lasting satisfaction. Phil finally sees he needs to change his ways, and after failing to win Rita as the old Phil, he ironically wins her as the 'new' man he becomes when he stops trying.

Bill Murray fans may have been expecting another 'Caddyshack' style broad comedy, but 'Groundhog Day' is much more than that, even though there are plenty of laughs. It subtly implies a Buddhist philosophy where incremental improvement is made across many lifetimes until 'perfection' is achieved. It can even be read as a metaphor for a Catholic type purgatory, where souls supposedly go to await their final fate, although that particular superstition has since been abandoned as official dogma. What is a stronger interpretation is seeing the human evolved trait of empathy, which reaches the level of love in it's strongest phase, being the thing that redeems and defines a life worth living. Phil is accused by Rita of "loving himself", to which he replies, "I don't even like myself", and therein lies the rub. Phil needs to move beyond a self indulgent and shallow existence into one that incorporates other's needs and feelings

Murray delivers one of the best characterisations of his career in Phil Connors, making as he was the difficult transition from goofy oddball to mature actor, all in public view. It's a wobbly tightrope he walks, but he successfully convinces us that his character does indeed respond to a deeper need for self awareness and improvement. Andie McDowell is sweet as Rita, and given her limited range as an actress she does all that is required as the decent woman worth changing your life for. There are several fine supporting moments, and most of them belong to Stephen Tobolowsky as Ned Ryerson, the very annoying old school friend of Phil's who pops up repeatedly.

The shoot supposedly ended in a falling out between Ramis and his notoriously difficult star. Murray resented the comedy baggage films like 'Caddyshack' had lumbered him with and wanted the film to be more philosophical, Ramis kept reminding him it was a comedy and the two went their separate ways. Any film that has a TV weatherman reading Chekhov on air and having the audience in raptures seems to achieve both. Nonetheless, they created a comedy for the ages with 'Groundhog Day, one with dimensions other comedies cannot get close to. Murray, ironically, continued his own personal search for meaning as a mature and capable actor, echoing Phil Connors quest in some ways, as he found worthy and interesting roles for Wes Anderson and Sofia Coppola. Ramis headed for 'Analyse This'. 'nuff said, but he sadly passed away in February 2014, seemingly unreconciled with Murray. 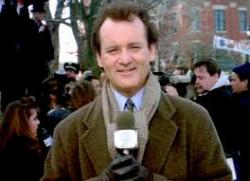 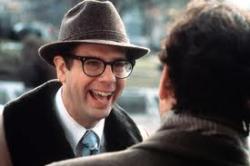 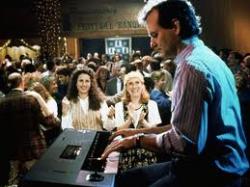