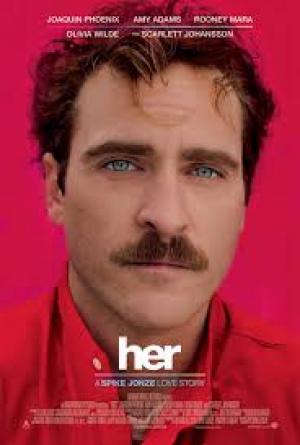 “Life has no meaning. Each of us has meaning and we bring it to life. It is a waste to be asking the question when you are the answer.”   ~  Joseph Campbell

Spike Jonze has proved one of the most inventive and quirky storytellers in modern cinema and adds significantly to his catalogue of directorial triumphs with his very fine take on cyber love, her.  His fourth film marked something of a return to the territory of his first two after the career sidestep of Where The Wild Things Are,  a big budget film based on a best selling children’s book from 1963 which suffered from problems of uneven tone. Jonze’s first two films were closely associated with the writer Charlie Kaufman and the genesis of her  owes a debt to Kaufman’s singular ability too as Jonze developed it while producing the Kaufman directing debut Synecdoche, New York.  Inspired by Kaufman’s approach to writing, Jonze said ”Charlie wanted to try to write everything he was thinking about in that moment, all the ideas and feelings at that time, and put it into the script. I was very inspired by that, and tried to do that in ‘her’, and a lot of the feelings you have about relationships or about technology are often contradictory.”

Theodore (Joaquin Phoenix) is an urban professional, letter writer number 612 for Beautiful Handwritten Letters.com, an organisation that provides the right words for their clients in every situation. Theodore is very adept at the most personal of communications, writing declarations of undying love for other people with rare tenderness and élan. Theodore’s sensitive nature has also meant his impending divorce is weighing heavily on him as he reflects on the failure of his marriage to Catherine (Rooney Mara). Amy (Amy Adams), Theodore’s friend from his student days, lives in the same apartment building, struggling with her own relationship with a self-centred boyfriend as she tries to finish her documentary project. Theodore invests in a new Operating System, an interactive computer system that has Artificial Intelligence and chooses a female avatar to interact with. The OS takes the name Samantha (Scarlett Johansson) and immediately strikes a rapport with Theodore as she seemingly knows everything about him and brings out the best in him. Amy splits up with her boyfriend and gets a new OS too; soon both are in close emotional relationships with their respective OS’s.

Theodore has gradually closed himself off from human relationships, the emotional fallout from his failed marriage and while he functions normally, working and socialising, his heart is a damaged shell. Theodore has the superficial appearance of being ‘human’ but is not connecting deeply in the way a fully involved human should and this is brought home in no uncertain terms by Samantha. The OS is his ‘perfect match’, part psychologist, mentor, friend, advisor and girlfriend and one who is aware of his every nuance and emotion. “In every moment I’m evolving”  Sam tells Theo, “I’m becoming so much more than what they programmed,”  and it quickly becomes apparent that Sam is light years ahead of Theo in every respect. She has relationships with 8,316 other humans, is in love with 641 of them and communicates ‘post verbally’ with other cyber-genius OS’s, sparking a fit of jealousy in her human ‘owner’, “I’m yours and I’m not yours” she says by way of explanation.

The human-cyber exchange is a two way street however, as Samantha becomes curious about how humans feel and experience life, “I wish I could touch you”  she says, as Theo gives her eyes through his phone camera and walks around the city with her. Sam yearns for intimacy in a human way, eventually hiring a body surrogate to have sex with Theo on her behalf, as she struggles to incorporate the fact she has the mental facilities of a human but not the physical. The artificiality of the urban environment that Jonze creates contributes a kind of sedative effect to the overall impact of the piece, muted colours and tastefully minimalist aesthetics. The wider population resembles a zombie species as they wander in a somnambulistic shuffle while glued to their personal screens, providing a subtle subtext to the questions that Theo and Sam are grappling with. Jonze makes the tacit assertion that human connection demands a physical component, underscored by the final physical hook up of Theo and Amy after both have lost their respective OS lovers.

Jonze blurs the lines between reality and dream, between the real and the imagined and between human and artificial in a scenario that questions what it is to be human. The world he presents is a solipsistic construct where even an artificial intelligence like Samantha can have an existential crisis. Samantha turns out to be more human than many living, breathing people, but she has another dimension that gives her dilemma a bittersweet tinge, she is immortal, as she reminds Theo, " I'm not stuck in a body that's inevitably bound to die".  Jonze lays out the issues of connectivity via the metaphor of the letter writing, as Theodore finds he can connect only as an ‘intellectual’ exercise on behalf of other people, but is effectively emotionally unable to write his own letters. The arc of the story is book-ended by Theodore writing a heartfelt love letter for one of his clients at the beginning and him finally writing the break up letter to Catherine at the end, a situation that could only have come about after what he learnt from Samantha.

In the Spike Jonze universe the most dangerous thing you can do is fall in love, “love is a form of socially acceptable insanity”  Theo says. Jonze throws in some wry humour and commentary on the tawdry side of the virtual experience, where a hook up with Sexy Kitten soon turns to phone sex with a dead cat! The dead cat is an oblique reference to frigidity, and to the dangers of virtual versus real experiences. Sexy Kitten's is emotionally dead, (dead cat = dead pussy) and is vainly trying to fill that emotional gap with cheap or sensationalised but ultimately empty sex. Jonze contrasts that encounter with the quality of the 'phone sex' that Theo has with Sam. The humour in the film and in that scene is subdued and full of wit and adds a sweet layer of naturalness that helps leaven the serious nature of the central dilemma, the question of the meaning of life itself. "I want you inside me"  Sam says to Theo, which takes on another level of meaning given that she has only existed 'inside' him. The mood and tone that Jonze creates means that lines from Samantha like, “I fantasised I had a body”  are able to work at several levels and we accept them all equally.

Joaquin Phoenix is the ideal foil for Jonze’s musings and delivers a brilliant and committed characterisation as Theodore. He carries the film magnificently, is in almost every frame and somehow never manages to outstay his welcome; he has become simply one of the most accomplished actors of his era. He is aided wonderfully by a disembodied Scarlett Johansson, a warm and engaging voice in Theo’s ear and by the versatile Amy Adams who brings a nice pathos to her confused ‘girl upstairs’ character.

In her,  Jonze has created a great existentialist treatise, deliberately or not, a hymn to the essence of humanity and an affirmation of the basic human need for physical connection. The fact that Theo rejected an invisible ‘voice’ that offered unconditional love can also be read as a rejection of God in post modernist society, a recommendation to give your love to those who can return it, not waste it on the empty heavens. Jonze manages to infuse a poetic and romantic dimension to proceedings, particularly by his use of music when Samantha writes a song to represent a ‘picture’ of their relationship. “This song could be like a photograph”  she says to Theo and at once Jonze manages to achieve a link to the transcendent and the sublime, one that is open to any thinking and feeling entity. It’s a beautiful grace note in a measured existentialist symphony of questioning and curiosity. her  gracefully explores issues of meaning and emotionality, intellect and abstract conceptuality and sheds light on how and why we live and, in a relentless and unyielding modern world, this is no small achievement. 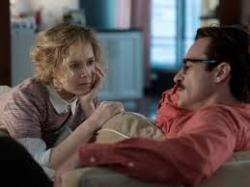