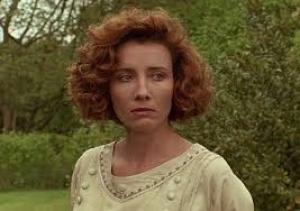 James Ivory, the cultured American director and his Indian production (and personal) partner Ishmael Merchant enjoyed great success with their filmed adaptations of E.M. Forster’s A Room with a View  and Maurice  in the 1980’s. They happily continued this connection with their writer/partner Ruth Prawer Jhabvala’s adaptation of Forster’s Howards End,  the multi-layered Edwardian tale of two sisters on the fringe of English high society. The novel was a scandal upon its publication in 1910, challenging the staid mores and conventions of the day with its honest admission of the reality of the sexual laissez faire  of the upper class in relation to the lower classes, and the double standards it implied. Emma Thomson plays Margaret, the headstrong older sister who becomes involved with a staid and conservative older man, and has to deal with her unconventional sister Helen (Helena Bonham Carter).

Margaret Schlegel cultivates a friendship with the older Ruth Wilcox (Vanessa Redgrave) as a gesture to repairing a previous misunderstanding between the two clans. Ruth treasures their friendship, even though she’s suffering from a terminal illness, and decides to leave her treasured family home in the country, Howards End, to Margaret when she dies. Ruth’s husband Henry (Anthony Hopkins) secretly vetoes Ruth’s posthumous wish, but strikes up a relationship with Margaret in the bargain that opens other possibilities. The sisters also befriend a working class clerk called Leonard Bast (Samuel West) and on Henry’s advice they recommend he leave his job before the company collapses, he does so and his position becomes parlous as a result. Helen blames Henry and attempts to extract redress on Leonard’s behalf, but events soon spiral out of control.

E. M. Forster used the turn-of-the-century suffragist movement, and the concomitant rise of the position of women in the heavily patriarchal British society, as the impetus for his narrative via the intelligent and self-aware Margaret. Henry is a representative of the old system, where “Who is who and what is what”  is well understood, and he struggles with any variation to the natural order of things, and particularly the threat that Helen’s thinking represents. Margaret instinctively understands that “Nature pulls one way, and human nature the other”,  a philosophy she shared with the pragmatic Ruth Wilcox. Ruth valued her family’s connection with the past via the continued association with her own families Howards End, a property she brought to the marriage and a place Henry did not particularly care for, except as an asset. Margaret is able to walk both sides of the street, and to diplomatically smooth over ruptures in order to sustain a decent life, but she is also aware that money is power.

The film is an examination of the subtle divisions that exist in a society where the surface reality is often illusory, and where beneath that surface there lurks deep pain and real passion. Henry is not one for introspection, the status quo suits him fine, whereas Margaret is open to the feelings of others, an empathy Henry does not naturally share. After Helen berates Henry because of their complicity in Leonard’s reduced circumstances, she receives a lecture that concludes, “The poor are poor, we are sorry for them, but there it is”.  Helen despises a life of privilege that avers generosity of spirit, and Margaret too recognises a paucity of giving in the Wilcox ethos, and by compromising her own principles to continue the relationship with Henry she begins to quietly despair and to question her own scruples. The duplicity of Henry over his dismissive dealing of Ruth's last wish involving the house hangs like a time bomb over proceedings, but Ivory chooses not to make a big thing out of it, it is merely indicitive of the lack of power that women like Margaret confronted on a daily basis.

It’s Margaret’s innate generosity and self sacrificing that challenges Henry’s world view, especially her willingness to forgive him for past transgressions. She demands the same standard of forgiveness from him when the time comes, but Henry’s closed emotionality forbids this. Henry has to confront a personal tragedy that intrudes upon his fortress like view of himself, and belatedly realises that he lacks connection. Forster’s note for the book was a succinct two work invocation, “only connect”. Hopkins comes into his own in these scenes and the dleicate interplay with Thompson and Ivory's graceful cinematic treatment of the fractured relationship is a high point.

Forster was privately a gay man but publicly straight, living in a closeted era, and the struggle for an individual to live an ‘authentic’ life must have been one he experienced first hand. Forster presents the arguments for a progressive society via the rubric of the emancipation of women and the struggle to win them the vote prior to WWI, his championing of the forward thinkers and the misfits revealed a writer well ahead of his time. Forster understood it was power and privilege that entrenched these divides, and as long as the laws were made by straight, middle aged men who rose by birthright and not merit then change would be hard won.

James Ivory again extracted superb performances from his fine cast, and Emma Thompson’s pivotal characterisation of Margaret deservedly won wide acclaim, including the Best Actress Oscar. Anthony Hopkins is equally as commanding, his Henry being something of a companion role to his part in Merchant-Ivory’s stunning The Remains of the Day,  again opposite Thompson, the following year.  Bonham Carter revealed some of the grit and depth that other lighter period pieces did not allow, and hinted at the edgy actress that was to come. Vanessa Redgrave made the most of her small part, a delicately mannered and finely realised support that was touching and crucial.

Merchant-Ivory became a byword for quality; seemingly able to produce an endless run of classy features, some 44 films over 55 years, beginning in 1963 and by the early 1980’s they were consistently creating masterworks. They employed superb art direction and first rate actors, creating an effortless authenticity in all of their features, and enjoyed great critical acclaim, and sound commercial success. Howards End  is one of their very best, it’s for lovers of intelligently written, beautifully acted, thoughtful cinema, and the fact that it’s also gorgeous to look at (appropriate at least given the genre) is an added and welcome bonus. 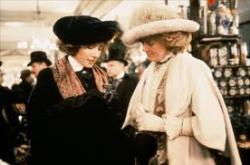 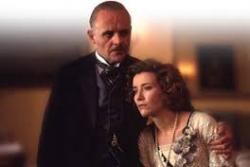