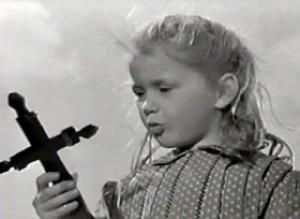 Forbidden Games is one of the signal achievements of classic French cinema, a beautiful and unexpected film that details a child’s attempt to understand death in wartime with a ‘game’ that is equally a perversion of an adult ritual and a sublime realisation of the transcendent possibilities of it. After the documentary style realism of his first feature La Bataille Du Rail, Rene Clement employs the technique in a near fantasy setting to haunting effect, the source novel adapted by the established team of writers Aurenche and Bost, noted for their ability with literary properties. What began as a short film was extended to feature length at the behest of Rene Clement’s mentor Jacques Tati, and the comedy in the piece it must be said is brilliantly handled and never gets it the way of the gravity of the subject. Clement wanted to cast a 9 year old girl as Paulette, opposite the 11 year old Michel, but the remarkable audition of a persisent 5 year old, Brigitte Fossey, thankfully convinced him otherwise and as a result we have one of the most astonishing juvenile performances ever committed to celluloid.

The opening title suggests a story book overtone but it quickly becomes apparent we are not viewing any fairy tale as we open on a column of refugees trudging down a country road after the fall of Paris in June 1940. The line comes under attack from German planes and in the confusion Paulette’s puppy makes a dash across the bridge, the little girl running off after him. Clement makes the point from the start, that connection and devotion to life of all sorts means dealing with the loss of it as both the girl’s parents and her dog are killed under fire. Cradling the dog’s body Paulette is picked up by another couple, but when the woman throws the dead dog into the river Paulette runs after it once more and is separated from the refugees. Following a horse that has strayed from the line she ends up on the small farm of the Dolle’s, a peasant family who take her in. A son, Georges Dolle, has been injured by the stray horse but a younger son, Michel (George Poujouly) befriends Paulette and they become inseparable.

Told her parents are no longer at the bridge, but are ‘in a hole’ Paulette sets out to do the same for her dog, which she’s left out in the fields. She is unaware of Christian teaching and shocks the devout country family with her lack of knowledge of the cross and the catechism. A Priest interrupts her first attempt to inter the puppy, telling her a short prayer for the entry into paradise of her parents. She finds an abandoned water mill nearby and digs a hole for the puppy, praying over it as she does. Michel finds her and begins to help, and as she’s concerned that her puppy will be lonely and sad he decides to populate their cemetery with other animals, even going so far as killing some to provide the bodies. The cemetery becomes their secret project and Michel attempts more elaborate and detailed graves, trying to construct suitable crosses for the purpose.

The outer environment they live in is a world of adults, feuding with their neighbours the Gouard’s. M Dolle (Lucien Hubert) and M Gouard (Andre Wasley) are concerned with the petty rivalry’s of unimportant and impotent men. Paulette and Michel see the hypocrisy and the barriers that prevent true connection even though one of Dolle’s daughters is coupling with the deserter son of Gouard, Francis. Georges succumbs to his injury and the family bury him, providing counterpoint to the children’s ‘games’, bit in the procession M Dolle notices crosses on the hearse are missing and he suspects Gouard. The funeral mass is pure visual poetry and the cinematography of Robert Julliard is both sympathetic and striking. Paulette spends the time in mass eyeing off the elaborate crosses on the altar and encouraging Michel to imagine how they’d look in their cemetery.

Michel confesses his theft of the hearse crosses and is then caught trying to steal the ornate centerpiece crucifix from the church. On a moonlit night Michel and Paulette raid the church cemetery and steal 14 crosses, dropping one on the road like a noir Hansel and Gretel only to have it found the next day adding fuel to the Dolle v Gouard feud. The patriarchs slug it out in the churchyard, comically falling into a freshly dug brave before the Priest breaks the sanctity of confession by naming Michel as the thief. Paulette and Michel refuse to reveal the location of the stolen crosses, the police arrive to take paulette to an orphanage. M Dolle agress to keep Paulette if Michel gives up the location. Michel tells him but his father breaks his word and the police take Paulette away. Michel goes to the mill and destroys the cemetery. Paulette is tagged, like a corpse, at a busy Red Cross depot and upon hearing a cry of ‘Michel’ in the crowd she wanders off.

Clement has said when a film doesn’t work it’s ‘failed alchemy’, and Forbidden Games is the polar opposite of that. All of the elements combine to create a mystical and lyrical whole, quite unique in all of cinema. The near disaster of the alternate beginning and end, that would have weakened the impact significantly can be seen on the Criterion DVD edition, a much more storybook-style narrative framing with the child actor’s outside the action as modern day children reading a story of Michel and Paulette. One imagines a Hollywood version would have employed just that device. The French have an ability to question and ponder philosophical propositions in a way Anglo-centric cultures cannot and the handling of death and the attendent existentialist meanings in this film is a prime example.The religious nature of the rituals is never overt, a more universal,humanist tone is accomplished because of the childish innocence involved.

The children create a cemetery of stunning poetic purity while the adult cemetery is bleak and overgrown, or a ‘slum’ as Dolle calls it. They create a dreamscape that helps them find satisfaction and contentment as they understand it, unaware that they are creating a ‘blasphemy’. The adults accuse each other of slights and blasphemys, showing little regard for the significance of the context, indeed M Dolle was more concerned with fixing his hearse, a status symbol, than attending the service for his son’s burial. The Priest and the father both are untrustworty, breaking their vows to suit their own purpose, a duplicity not found in the children. Paulette and Michel achieve an unwitting trancendence, enabled by their confusion and innocence only to have it ripped away by an unfeeling and uncomprehending world, the final seperation one of the most heartbreaking imaginable.

A classic, maybe even a top 10 film for me, un miracle du cinéma, once seen, never forgotten. 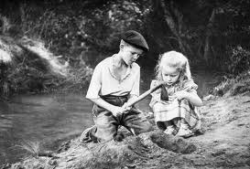 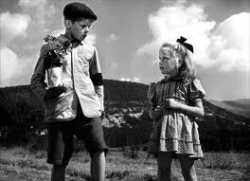 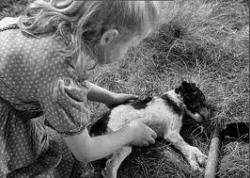 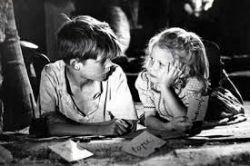 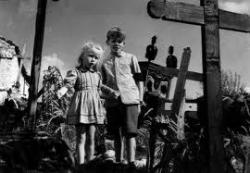 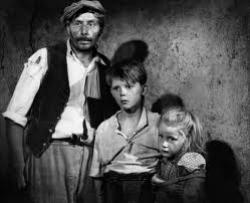 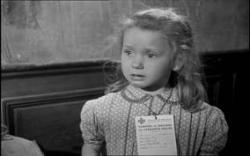