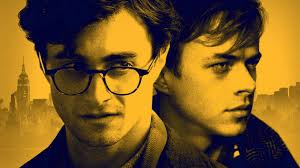 “Some things, once you’ve loved them, become yours forever, and sometimes when you let them go they circle back and return to you. They become part of who you are” - Allen Ginsberg

John Krokidas co-wrote and directed a fine and vibrant debut feature that explores the tremulous beginnings of the Beats literary movement, and a murky murder-mystery that engulfed the key protagonists. The film operates as a procedural  in some ways, but essentially it’s an examination into the quicksilver nature of art, and of the impulses and circumstances that foster, or hinder, genius. The film is set in the early days of America’s entry into WWII, and mostly takes place in the hallowed cloisters of Columbia University, one of the most prestigious learning institutions in the world, and gains an edge with the subtext of sexual repression, the homosexual and closeted type. Krokidas gained maximum mainstream notoriety by casting ‘Harry Potter’ as a gay poet, and Daniel Radcliffe proved he was equal to the task, and no candidate for type casting, by delivering a fine and nuanced performance as Allen Ginsberg.

The young Ginsberg (Daniel Radcliffe) wins a place at Columbia, mush to the joy of his father, the poet Louis Ginsberg. Allen’s mother is something of an outsider, isolated except for Allen’s love and battling mental illness. Allen goes to University and meets Lucien Carr (Dane DeHaan), a brilliant and quixotic character, who introduces Allen to the nascent bohemian life in Greenwich Village. Allen’s fierce sexual attraction to Lucien leads to complications with Lucien’s friend David (Michael C. Hall), who is infatuated and abnormally obsessed with Lucien. David’s childhood friend, William Burroughs (Ben Foster), joins the group of misfits as does Jack Kerouac (Jack Huston) and they set down the terms of The New Vision, a movement to shake up the conservative American literary scene. Tensions within the coterie bubble to the surface when Lucien and Jack plan to run off and join the Merchant Navy and David seems overly desperate for Lucien to stay.

Krokidas provides a strong and vivid period atmosphere that serves to suitably frame the narrative and let the action speak soundly against an authentic backdrop. The prejudices of the period are subtly noted when Allen is greeted by a WASP jock in his room on the first day, he asks Allen his name and on hearing “Ginsberg”, he replies cheerily, “Jewish right? I’m gettin’ good at telling”.  Against this relentless Anglo-centric culture Allen quickly finds another ‘outsider’ in Lucien, but it’s not Lucien’s ethnicity that brands him as ‘different’, it’s his unconventionality and disdain of the ‘establishment’. They bond immediately over Brahms, and Lucien introduces Allen to his bohemian friends in the village. Allen finds out that there are many people who think like he does, dissatisfied with the artistic status quo and thirsty for another path forward.

Krokidas, himself an openly gay man, utilises the sexual attraction that Allen feels for Lucien to counterpoint the darker attraction that David feels. David has ‘stalked’ Lucien through different schools and states, and it’s unclear exactly what the level of their relationship entails, adding confusion in the mind of the already confused Allen. Regardless of the sexual subtext, it’s apparent that Lucien is attracted to intelligence above all, and to boldness, and he is also the “glue” that binds the group, the impetus for action. Lucien makes his stand in the Columbia Library, reading aloud provocative excerpts from Henry Miller, when challenged by the Librarian that the book is “restricted”, Lucien acidly replies, “That’s why I committed it to memory”. DeHaan’s mesmerising performance marks him as a young actor to watch.

The formation of a revolutionary literary cell, The New Vision, sees the men establish the principles they will adhere to, a new style to blow away the mediocre poetry of the contemporary populists like Ogden Nash, whom they despise, “We’re not going tokill him; worse, we’re going to make sure he’s not remembered”. Results are slow in coming, “We have the map, we need the work”, says Lucien, better at settings goals than actually writing anything himself. Burroughs brings drugs to the group to enhance the process, and David becomes increasingly marginalised. Columbia frowns upon their activities, and threatens to expel Lucien and Allen.

Allen is advised by his lecturer to throw out any comfortable writing habits he may fall into, or tropes that he feels attached to, “The first principle of good creative work, kill your darlings”, and Allen embraces the concept. “Like all sad people, I’m a poet”  is how he sums it up, writing wildly expressive and deeply personal lines that sum up his confusion and alienation. Lucien abhors the mundane, and as a supreme narcissist he remains blissfully unaware, at one level, of the firestorm of emotions he stirs up in others, and yet is archly manipulative at another. “You’re a phoney”, he spits at Allen, verbalising the cruellest taunt, one that presages the Holden Caulfield era that would definitively essay youthful alienation, in Salinger’s devastating, Catcher In The Rye.

A fine sense of story and place has John Krokidas manage the intricacies and inter relational subtexts with a nice subtlety. The film is a reminder that great art requires passion, and where passion resides, so danger tags along. It’s a force of nature that forms the collective, sparked into action by the catalyst that is Lucien. The story was written up by Burroughs and Kerouac jointly not long after the events, but the manuscript remained unpublished for decades at Lucien’s insistence. The book was finally published after Lucien’s death. Allen Ginsberg’s most famous poem, Howl, caused a scandal in 1957 in literary circles, and made his name, but the dedication to Lucien was soon removed at Lucien’s request, his figure still looming large over the ‘New Visionaries’.

One of the central and disgraceful aspects of the law at the time is also touched upon, that a man could claim a legal defense of "Honour Slaying" if the alledged homosexual advances of a 'predator' caused a victim to fear for his life. If a death resulted, the law enabled this defense to gaol homosexuals, or dismiss murder charges so lesser charges could proceed. Krokidas weaves this into the film without becoming didactic or distracting.

Kill Your Darlings is a fine and valuable document of a time that set the events that culminated in the 1960’s counter-culture into motion. It’s an intelligent and thoughtful work, affirming the value of those on the fringe; the artists, the queers, the misfits, the desperate, the passionate, you know…. humans. 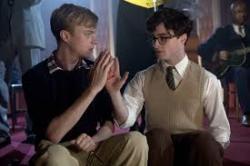 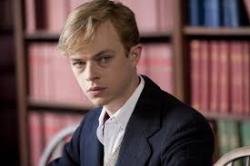 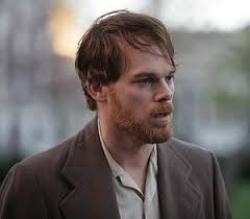 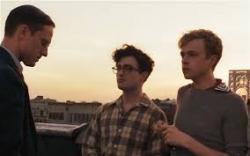 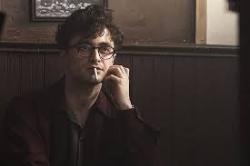 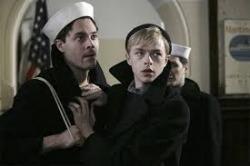