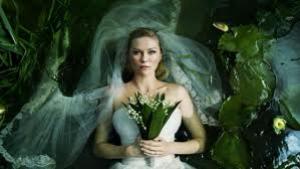 Lars Von Trier, enfant terrible of European cinema in the late ‘90’s and naughties, disgraced himself with ill tempered remarks about Hitler and the Nazi’s during the Cannes festival debut of his 2011 entry, Melancholia, an event that seemed to over shadow the worth of his remarkable film. A depressive himself, Von Trier wanted to explore the idea that mentally ill people who expect things to turn out bad usually behave the calmest under extreme pressure. The film becomes an examination of the gap between intellect and emotion, empiricism versus intuition as Von Trier elevates the condition of melancholia to that of an apocalyptic metaphor. On the recommendation of director Paul Thomas Anderson, Von Trier gave American Kirsten Dunst the role of her life as Justine, a woman who battles depression on her wedding day, before becoming near catatonic, necessitating her being taken in to recuperate by her sister Claire.

Von Trier begins with a stunning visual ‘overture’, an eight minute précis on what we can expect to unfold during the course of the narrative. In a style and with a lushness that harks back to classical European filmmaking, Von Trier references films like L'Année dernière à Marienbad, the Alain Renais meditation on ambiguity, causality and spatial relationships. The grandiose setting and the heavily romanticised soundtrack of epic Wagnerian string themes further moves the piece into the realms of a dreamscape, again approximating an aesthetic vulgarity to counterpoint the devastating and revealing human tragedy, that of a woman struggling to function at every level.

Justine (Kirsten Dunst) is a beautiful young woman about to marry Michael (Alexander Skarsgård), a man who is very much in love with her, at the palatial digs of her sister Claire (Charlotte Gainsbourg).  Justine works in advertising, and is treated as a seer by her boss, (Stellan Skarsgård) who puts an intern on her tail through the night so as not to miss any pearl of copy that falls from her lips. Claire’s husband John (Kiefer Sutherland) is financing the shindig, and attempts to cope with the sister’s dysfunctional family in the process. Gaby (Charlotte Rampling), their mother, gives the wedding guests a pause for reality by insulting her daughter as her estranged husband Dexter (John Hurt) indulges himself in drink and womanising. Michael tries to reach his increasing distant wife, as she weaves in and out of his orbit, but gives up and leaves. Claire and John take a depressed Justine in to their home as she attempts to recuperate during the approach of Melancholia, a rogue planet that will purportedly ‘fly by’ the Earth in a near miss.

Von Trier made the film in an atmosphere of pop culture ‘end times’, specifically the so called ‘Mayan’ apocalypse that supposedly predicted the end of the world in December 2012. By backgrounding his piece in this way Von Trier forces the audience to subliminally assess and ‘justify’ life, and Justine (get it?) is his mouthpiece for this in the film, “The Earth is evil, nobody will miss it”, she tells Claire. Claire has bought into the consumer dream, a ‘castle’ to live in, a rich husband, and tries to convince herself that all is well, but instinctively feels it is not. John calms her down with reason, “trust the scientist” he urges, as he assures her the planet will miss the Earth and life will go on.

Justine is an ‘empath’, intuitively reacting to the natural world in a way that is not open to John, a man of logic. The weight of the pain and evil Justine sees seems to render her inactive, a weight John does not understand. The conflict between intuition and empiricism is subtly set up by a couple of sequences, Justine riding a horse that balks at a bridge, inexplicably unable to cross. The same bridge mysteriously holds back a machine, a golf cart ridden by Justine, in the same way, as neither method has the answer. Von Trier marks the boundary of their universe, no matter the scale outside, it’s an internal universe that Von Trier alludes to. Justine is her own planet, spinning out of control, as she deals with the influences of outside ‘gravity’, the push and pull of her family. Justine bridles against expectation, just as the horse crossing the bridge did. Claire is mystified as to why she can’t show some happiness at the display of conspicuous devotion that the expensive wedding should engender, but Justine is operating under another set of universal laws, and laws that Claire senses herself.

Von Trier offers no easy or trite essay on mental illness, merely a poetic and oblique take on the workings of the mind. Ultimately it is in the context of human relationships that his major points are made, just as planets ‘interact’ with each other, so must we. If planets collide, as people do, then devastation ensues, but it’s only in the push and pull that we truly discover ourselves, and measure the worth of life itself. In Von Trier’s universe wealth is no bulwark against misery, empiricism brings no certainty and the simple pleasures of sharing an insight with a child are treasures beyond compare.

John’s reaction to the ‘betrayal’ of science sees Von Trier come down in favour of the feminine, for intuition and feeling in place of empiricism. Justine is framed as a Nordic goddess in the opening sequence, and appears in harmony with the natural world in a way unavailable to her in the human world. Justine’s wedding is emotionally weighted more to nature than to Michael, the dream like fantasy sequences of her walking in her dress through verdant fields, giving herself to the natural world in a way denied to her husband is telling. She also offers her nakedness to Melancholia in a way she does not to Michael, and the undeniable consummation at the finale has quasi-sexual, cosmic big-ish bang overtones. Von Trier’s dark humour is never far away.

The film works well as a gentle philosophical question mark, and as a vehicle for fine expressive acting. Von Trier sides with the ladies, the men work hard to flesh out unsympathetic parts, but it’s the women who shine. Rampling is withering in her cameo, and Gainsbourg brings pathos and depth to the role of Claire. Kirsten Dunst is however a revelation as Justine, she dominates the screen and centres the film at every level. Dunst won the Best Actress at the notorious Cannes event, and revealed herself to be an actress of nuance and range as she moves out of ingénue parts and into older and more dimensional characters.

Melancholia is a fine piece of cinema, redolent with rich imagery and beautifully realised by a first rate cast. L'enfant terrible grows up. 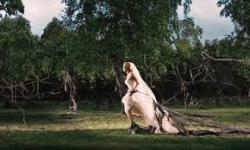 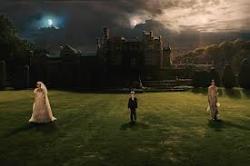 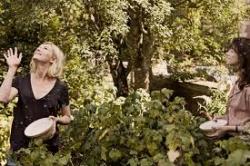