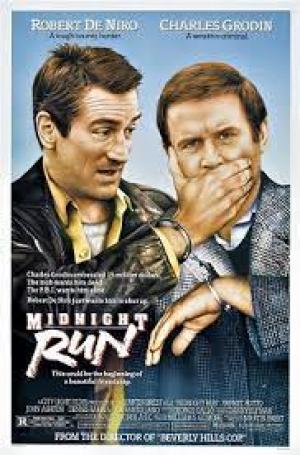 'I've never been one of those actors who has touted myself as a fascinating human being. I had to decide early on whether I was to be an actor or a personality.' ~ Robert De Niro

Martin Brest had directed the populist tosh, mega-hit Beverly Hills Cop and so came to George Gallo’s formulaic action/comedy script in good box office form. The director and writer had the good fortune to pair the unlikely two leads in Robert De Niro and Charles Grodin and sit back and watch the remarkable chemistry work its magic in a sweet throwback to the 1970s Buddy Movies genre. The film exists in a space somewhere between The Defiant Ones, The Odd Couple and The Last Detail and given that the production was full of key crew that were more journeymen than fine artists, it is a triumph of steady professionalism and craftsmanship and of what can happen when the sum of the film is greater than the sum of its parts.

Jack Walsh (Robert De Niro) is an ex-cop bounty hunter who takes a job to capture a mob accountant who skipped bail. The mild-mannered number cruncher Jonathan Mardukas (Charles Grodin) had embezzled $15 million from his mob boss and has fled in fear of his life. Jack finds Mardukas in New York but soon he has to deal with mob hitmen intent on killing his captive before he is delivered back to the bondsman in L.A. Flying across country becomes impossible and the pair embark on a cross country epic trek to beat the deadline.

Brest had enough savvy experience to bring all the elements together in an engaging and stylish brew of comedy, action and suspense. Midnight Run has no pretensions to being anything other than grand, mainstream entertainment and lives up to this tacit compact with the audience at every beat. Brest resisted pressure from the studio to change the accountant’s gender and to cast Cher in the role, and also backed the lesser known Grodin against a studio push for a second star in the role, either Bruce Willis or Robin Williams. Brest at that point had enough cache from the Beverly Hills Cop success to hold the line and deliver the film he wanted.

Any other casting choice for Mardukas would have altered a delicate balance, as the joy of Midnight Run is in the interactions of the lead pair, and Brest had enough sense to let the dynamic between them not be overwhelmed by the large-scale action pieces. Gallo’s script would not work in the hands of lesser actors, half as well as with De Niro and Grodin who are both in fine form. De Niro was coming off more than a decade long, unbelievable hot streak of great films, and having just made the darker The Untouchables for Brian De Palma, he wanted a change of pace. He’d dabbled in comedy to mixed results prior but was mostly known as the go to dramatic actor of his generation, so this film was a good indicator of the lightness of touch he would demonstrate in later years.

Charles Grodin was in many ways an actor’s actor, a veteran of TV, Broadway and cinema by the late 1980s, he was also a writer and director for disparate projects over the decades, never rising to outright stardom, but his work always attracted the respect and admiration of his peers. He turned down the role of Benjamin in The Graduate in 1967, only to see it make Dustin Hoffman a star, and worked in supporting roles mostly in cinema from then on. His quiet determination and obvious humanity shone through in every role he tackled, and he rarely sounded a false note in any characterisation he attempted. As Mardukas he is fully committed and yet can bring a warmth and understatement that humanises and deepens the character. De Niro generously attributed the success of the film to Grodin’s approach to the part but it in truth he plays off De Niro’s flighty capriciousness to achieve the perfect balance. Grodin went on to a kind of stardom not long after as the long-suffering dad in the very successful dog franchise, Beethoven.

All the elements that contribute to making Midnight Run so enjoyable extend from the smallest role to the big, exciting action sequences. Yaphet Kotto makes nice play of the earnest FBI man who has his identity stolen by Walsh and Dennis Farina is suitably arch as the mobster villain, but Joe Pantoliano takes the supporting cake as the fraught bondsman watching a lot of money vanish in a puff of smoke. The score, an early work from future major Hollywood composer Danny Elfman is also top shelf - bluesy and agile and always evocative.

Brest not only handled the big action stuff well, but he also integrated the smaller human moments, especially the remarkable scene between De Niro and his long-estranged daughter and a touching parting of the ways scene between De Niro and Grodin. The film is a creative highpoint in many ways for him, even if the over-rated The Scent of a Woman garnered more awards and praise a few years later. It is a fun ride and it’s done with verve and heart, Hollywood entertainment at its best and a pleasure to see two great actors sparking off each other and lighting up the screen in the process. 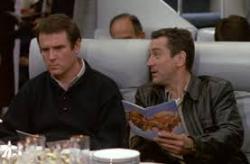 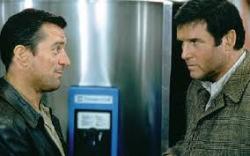