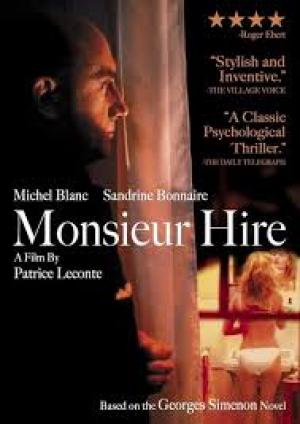 A room with a view

Patrice Leconte is the master of the compelling set-up in all of his signature films, whereby he draws the viewer in by establishing an attention-grabbing premise and then proceeds to attach action, character and most importantly a mordant and wicked wit, to his unfolding fables. Of his earlier films, Monsieur Hire is a prime example, where a lonely and “weird’ outsider spends his evenings watching his attractive neighbour as she undresses, only to be discovered and, instead of being denounced he is embraced by the object of his gaze. Based on a classic 1933 novel by Georges Simenon, Leconte stitches several layers into his psychological thriller and plays with the idea that love and obsession are often close relatives to corruption and betrayal.

Monsieur Hire (Michel Blanc) is a non-descript tailor who lives alone in his apartment and keeps very much to himself. He allows himself very few distractions, his pet white mice at work, visits to a local brothel and his odd evenings at a bowling alley where his flair for the sport makes him something of a celebrity amongst the younger ten pin bowlers. He spends every evening fixated upon Alice (Sandrine Bonnaire), a beautiful woman and seeming free-spirit who lives across the courtyard and leaves her blinds open. Hire is visited by a cop who is investigating the murder of a young woman in a nearby park, and Hire’s odd habits and outsider status puts him under suspicion amongst his wary neighbours. One of these nights Alice notices Hire staring through her window and initiates contact with him, which leads to a relationship that potentially compromises the one she has with her fiancé Emile. Hire opens up to Alice and offers her a different life than the one she envisaged with Emile.

The joy of Monsieur Hire is that Leconte never stoops to the obvious or lazy visual/character shorthand that most directors fall for in framing the ‘bad’ guy and the ‘good’ girl, opposites attract scenario. He fills every frame with elegant compositions and fine detail that never gets in the way of the narrative progression, merely adding weight and texture as the story within the story emerges like a series of ornate Russian dolls. It’s a neat trick as the two leads are able to imbue real dimensions into their characterisations that go beyond the surface of ‘reclusive pervert meets curious country girl.’ Leconte is able to balance the awkwardness and perversity of the ‘meet cute’ with deftly crafted character touches and a tender humanity that deepens the impact of the final betrayal.

M. Hire is really M. Hirovitch, and unlike the previous adaptation in 1947, Panique, by Julien Duvivier, Leconte focuses on the twisted love story with only a smaller subtext of anti-Semitism, different to the overt nature of Duvivier’s rendering where the denouncing or scapegoating of Jews during the war was a recent stain on French history. Leconte really gives a morality lesson on the treatment of the outsider in society, and he contrasts the treatment Hire receives with the assumptions made about Alice, who is several generations French, white, attractive and the ultimate insider

In a series of deft visual clues Leconte adds subtext to his delicious character portraits, in a sequence where Alice insinuates herself into Hire’s life via a bag of tomatoes, and in the metaphor of the white mice in Hire’s office. Hire liberates his mice just as he feels Alice has liberated his heart, but in an echo of Hire disposing of a dead mouse, he too becomes disposable. Leconte’s treatment of the story can also serve as a telling lesson on post-colonial integration, a lesson more relevant post the November 2015 Paris terrorist attacks than at any time since the 1960’s Algerian crisis and the wave of North African immigration into France.

Sandrine Bonnaire had risen to prominence via the lovely Agnes Varda film, Vagabond, some 4 years prior and she is simply ideal as Alice, bringing a tender ambiguity to a difficult role. Michel Blanc was a successful actor/comedian associated with the Le Splendid group and had made a couple of broad, mainstream comedy hits with Leconte in a series called French Fried Vacation prior to M.Hire. Blanc is wonderful as Hire and delivers a brilliant characterisation that is tonally the opposite of those films, as he unlocks the contradictions and humanity of the man, letting us in to his secret desires and hopes. The film is also aided by a fine, elegant score by Michael Nyman, not a note out of place from the minimalist composer par excellence.

Monsieur Hire is a superbly distilled and potent tale of loneliness, connection and the difficulty of communication, with an added patina of sexual tension and mild perversion. There are inescapable overtones of Hitchcock's Rear Window, but Leconte's is in some ways a more honest investigation into the nature of voyeurism and eroticism. In Leconte’s world there are deep substrates that occasionally boil to the surface, acting upon thoughts and actions in unexpected ways, but equally for Leconte, just as in Jean Renoir’s world, everyone has their reasons. 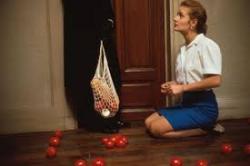