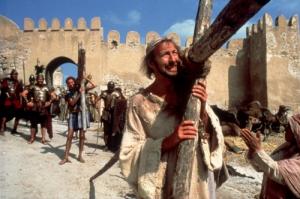 The genesis (I know!) of this little epic came when Eric Idle was asked if the team had a follow up to  Monty Python and The Holy Grail  in mind, he jokingly said "Jesus Christ, Lust for Glory!"  The joke took wing and soon the boys were riffing on the bottomless well for satire the subject provides. Early ideas about the story around Jesus messiah figure were soon rejected as having too much baggage, for example a sketch was written involving the ‘virgin’ Mary having to explain to her increasingly incredulous husband Joseph that she was expecting a child! - and so to avoid the complications of Jesus the solution was to concentrate on a contemporary, equally fictional character, Brian. This enabled the writers to free up their ideas from what would have been too sacred a cow to slaughter and still make their points. Their normal funding bodies at EMI baulked at the idea of a ‘Jesus’ film and Eric Idle accidentaly fixed the problem by telling his friend George Harrison of the money woes, George said he’d raise the cash and was as good as his word, for the stated reason that he "wanted to see the film".  Idle maintains to this day that it’s the most expensive cinema ticket ever purchased.

The maturity of the Pythons shows by this stage in the serious decisions they made regarding direction, going to one Python (Terry Jones) this time, not in tandem with Terry Gilliam as The Grail   was, even though Gilliam would go on to a more successful directing career. Also in casting they had the balls to veto senior Python John Cleese in his wish to play Brian, instinctively going for the best ‘actor’ in the group, Graham Chapman. The vision seems more coherant as a result, and Cleese, who is a fine actor but would have been too strong for Brian, gets some brilliant minor roles as compensation.

Mandy (Jones) gives birth to Brian in an adjacent stable, much to the consternation of the 3 not-very-wise men, and we’re off in a parallel Christian universe. Brian is schooled by Mandy in the rituals of "Dead Sea pedestrians"  including stonings, form which women are banned, leading to a nice black market for fake beards. Brian becomes besotted with a Judith (Sue Jones-Davies) a guerilla revolutionary member of the People’s Front of Judea wanting the Romans out of Judea, and he takes the job of painting some graffiti in the town square. Brian succeeds and eventually in escaping the Romans he’s mistaken for a messiah by a listening crowd who start to follow him everywhere. The Romans catch him and sentence him to cruxifiction. In a scene worthy of Kubrick Brian joins the throng on Calvary in being tied to a cross and misses his chance at a Pilate pardon by someone else claiming "I’m Brian, and so is my wife."

Graham Chapman heroically went cold turkey to keep his alcoholism in check, knowing that the film rested on his lead character, and his Doctor’s training gave him a focus on helping his friends survive the health challenges of a North African third world country. The Pythons instinctively knew that together they were greater than the sum of their parts and this film represents the pinnacle of their mighty achievements. They manage to pillory middle east politics, religious fanatics, Hollywood musicals, Latin lessons and Spartacus  all in a mere 93 minutes. The endlessly fractured groups of professional dissidents and permanently disappointed focus all their frustrations on the occupying Romans, who ironically are the only group capable of keeping the peace. A cavalcade on memorable sketches coheres beautifully until no turn is left unstoned.

The film looks gorgeous, the responsibility of Terry Gilliam as art director in lieu of co-directing, his logo design for the ‘suicide squad’ an inspired mix of swastika and Star of David!.This pre-dates Mel Gibson's mad visions by decades!  The Tunisian landscape adds a level of realism that ran contrary to a lot of Biblical epics, as Michael Palin commented ‘so many looked like they’d been made in Northern England’ making the overall feel even more authentic.

Of course the religious got it wrong in condemning the film, as their boy JC gets off pretty lightly, it’s his followers who are the butt of the fun. Chapman even went as far as to having the script checked by one of the Queen’s Canons, who deemed it not blasphemous, of course most of the detractors never bothered to see it, including famously Malcolm Muggerige, who in a debate with Cleese made the mistake of claiming Brian was Jesus, after missing the first 15 minutes of the film. Jesus is shown once, doing his sermon on the mount, itself not original as it existed in form and content in the Dead Sea Scrolls, which date some 120 years earlier than the Christ story. It’s heretical in the sense that it generously assumes the Gospels to be ‘true’ and then makes the satire at the expense of the ‘interpretations’ of the followers. As Cleese pointed out the sayings attributed to Jesus are pretty philosophically sound and hard to make fun of, whereas any movement "whatever the founder says, within three minutes everyone’s re-writing it in accordance with their own emotional needs".  Amen.

No biblical epic can be viewed in the same light once you’ve seen this, the madness of belief exposed with a grin. Athiest heaven. The Python genius peaked here, all the things that made them a great team, the fearless wit and will to push boundaries, came together to provide a fluid, seamless classic. The funniest film of all time, no contest. Probably the scope of the subject and the success with which it is tackled justifies the claim, although some Xtians may disagree, but to quote Brian, "you should think for yourselves".  Jesus, as an historical figure, fails the historian's test of authenticity, namely 2 contemporaneous mentions, there are none, even the Vatican now concedes the Josephus mention was a much later Church forgery. The Pythons pass the funny bone test with flying (circus) colours.

All together now… ‘Always look on the bright side of life’….

PS - Go to jesusneverexisted.com  for a witty and clever (and fiercly annotated) site and see just how fake the Jesus story is. 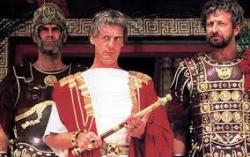 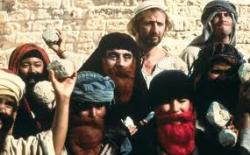 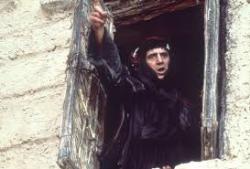 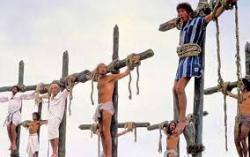