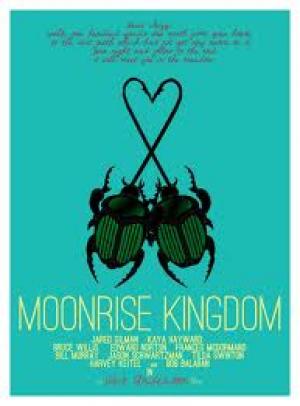 A Young Person's Guide to Love

Wes Anderson constructs beautiful and complex visual tapestries that speak to an idealised Americana, an hermetic universe replete with a storybook facade and fractured undercurrents. Moonrise Kingdom,  when taken with Rushmore  and The Royal Tenenbaums,  represents a kind of trilogy of preternatural intellectualism, where Anderson’s characters struggle to find a place to be themselves, and failing to find that in their superficially ‘normal’ world, they seek to construct a bespoke universe that suits their needs. Anderson seamlessly weaves his visual tropes and signature musical leitmotif  throughout, to create an identifiable and semi-surreal canvas upon which to question the puzzle of childhood, or more specifically purity and innocence, in relation to a world of adult duplicty.

Suzy (Kara Hayward) is a precocious 12 yr old, living in a large storybook house with her solicitor parents and 3 younger brothers. She runs off with Sam (Jared Gilman), an orphaned boy scout she had met a year earlier during a school musical, and formed a subsequent relationship as pen pals. Sam’s scout troop searches for him and links up with the local policeman and Suzy’s parents to track down the couple to a secluded New England cove. Sam’s foster family reject him, and it seems he must be sent to a juvenile refuge for treatment, causing the scouts to assist in reuniting him with Suzy. The troop run off before the social worker comes to collect Sam from the policeman who has taken a shine to him, and seek help at the main scout camp in the area. The young couple battle against the conventions of the adult world as they attempt to find a future that includes each other.

Anderson uses Benjamin Britten’s recording, A Young Person’s Guide to the Orchestra as a framing device, and as a metaphor for family relationships. Robert Yeoman’s deftly flowing camera capture’s Suzy’s home in dazzling, swirling detail as her young brothers listen, transfixed to the musical lecture. In the same way as the piece deconstructs a bigger sound ’picture’, into it’s relative component pieces, so too will Anderson deconstruct the family relationships, and reveal the smaller connections that contribute to the whole. The ending involves bringing those same disparate instruments into harmony again, just as Suzy comes to terms with her part in her family’s structure. Anderson uses the classical music motif to underscore Suzy’s upper-middle class and intellectual family, and by contrast Hank Williams plaintive country tunes for the earthy life of Sam and Captain Sharp (Bruce Willis). The film is set in 1965, allowing Anderson the eccentric use of a François Hardy single, for the young couple’s first romantic dance at Moonrise Kingdom, the name they give to their secret cove.

Sam sets off to the strains of Kaw-Liga, Hank Williams’ story song of a young Indian brave seeking out his forbidden love. Sam is an intelligent and isolated boy, bullied in his foster home, and he sees a kindred spirit in Suzy, “What kind of bird are you”?  he asks on their first meeting, “a Raven”,  she replies deadpan, aligning their relationship with the natural world that will ultimately offer them refuge. Suzy is a troubled girl, her dark eye make up recalling the character of the young Margot Tenenbaum, and equally she protects herself from the outside world with her books and her music. Suzy has seen the hypocrisy of her parent’s world via her mother’s secret fling with Captain Sharp, “I know what you’re doing with that sad, dumb policeman”,  as she seeks to remove herself from her surrounds for a fantasy creation of her own intellect.

Sam and Suzy’s retreat to nature finds them ironically spurned by the assaults of a direct lightning strike on Sam, and a storm that wreaks havoc with their escape plans. A wry narration by Bob Balaban puts the storm into historical context, and relates that the subsequent crop yields were exceptional, not only in size but in quality, alluding to growth in the young couple from the personal storms they survived. The metaphor provides a degree of hope for the future, as Suzy is harmonically in tune with her family situation and Sam finds a home with the kind hearted policeman. In a mirrored image of her mother’s liaison with the lawman, Sam is seen exiting Suzy’s window, wearing a police cap, a children’s sweet hearted version of what was seedy adult fare.

The film turns on the ability of the two juvenile leads to capture the quicksilver essence of the chaste, love-struck, quirky characters and, in Jared Gilman and Kara Hayward, Wes Anderson scores superbly. The debut feature for both actors leaves an indelible impression, and is one of the most sympathetic renderings of a coming of age drama American cinema has produced. Hayward is particularly effective as the conflicted Suzy, struggling with nothing less than an existential crisis, her intelligence and poise greatly assisting the believability, Hayward herself reportedly a member of Mensa. Anderson fills the support roles with his usual flair and touch, employing Bill Murray and Jason Schwartzman from his ‘stock’ company. Willis is fine in the sympathetic role of the not too bright policeman, and Tilda Swinton puts in a delicious turn as the effective ‘wicked witch’ character of Anderson’s fable. Ed Norton, Frances MacDormand and Harvey Kietel round out a brilliant ensemble cast.

Wes Anderson continues to provide witty and charming examples of his idiosyncratic and personal cinema, defying trends and styles, staying true to his singular vision. Anderson, almost exclusively, examines the veneer and surface of an upper crust, respectable segment of American society, and then, as if a WASP-ish Woody Allen, he gently removes the patina of civility to reveal a world of anxiety and neuroses. Anderson uses the camera moves, editing and framing of magical realism, the form more associated with European filmmakers from the mid to late ‘90’s. The resultant delicate, surreal and warm excursions into the realm of the human heart and mind continue to delight and entertain. Moonrise Kingdom  is classic Wes Anderson, no further comment required. 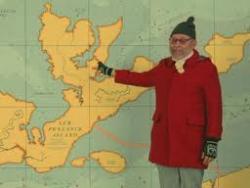 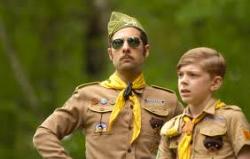 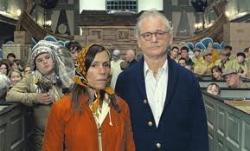