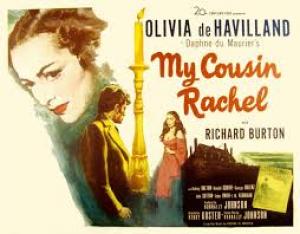 "There certainly is such a thing as screen chemistry, although I don't believe you find it frequently."
~ Olivia de Havilland

Fox won the rights to the best-selling 1951 Daphne Du Maurier novel, My Cousin Rachel and assigned it to veteran director George Cukor. Cukor cast up and coming Welsh thespian Richard Burton in his first American film and wanted either Greta Garbo or Vivien Leigh in the title role. Nunnally Johnson produced and wrote the adaptation, but after differences with the director and the author Cukor was replaced, with journeyman director Henry Koster. Fox cast Olivia de Havilland, who had spent the intervening 3-year period after her last film The Heiress, working on stage projects, and de Havilland delivered one of her finest performances as the mysterious Rachel. Du Maurier had already provided de Havilland's sister Joan Fontaine with an Oscar winning character as Rebecca, so playing Du Maurier femmes was something of a family specialty it seems, although the gothic-noir of My Cousin Rachel flips the uncertainty from the female to the male character.

Philip (Richard Burton) is raised by his beloved cousin Ambrose (John Sutton) on the windswept Cornish coast. Not long before Philip is due to come into a large inheritance, Ambrose goes to Italy for his health and unexpectedly finds love with Rachel (Olivia de Havilland). The pair are married but Ambrose falls ill and dies before Philip, who has received troubling letters from Ambrose, can travel to see him. Rachel is left out of the will, but even as his widow she makes no claim on the large estate and travels to meet Philip finally in England. Philip is not sure of Rachel’s involvement in Ambrose’s death, but soon he falls in love with her and his judgement is clouded.

Burton credited his casting to George Cukor, but Du Maurier may have pushed for it as well, and before Fox approached Cukor they had offered it to British director Carol Reed. Burton also insisted it was Cukor who was arranging for Garbo to come out of retirement to do the film, which is why he agreed to it, but Cukor left the project and Garbo with him. Fox offered the part to Vivien Leigh, but she turned it down before Olivia de Havilland came on board. Both leads were approximately the same ages as their characters, and ideally cast, even if they personally did not get along. Koster, a German Jew who fled the Nazis, brought a technician’s capability to the project, and ably put all the elements together but it’s tempting to contemplate what a visual poet like Reed would have done with such rich material.

Richard Burton plays Philip with every range of emotion the part required, from dizzy schoolboy, lovestruck youth to tortured lover and disturbed, rejected suitor. It’s a memorable and assured debut from an actor who had set the boards alight on the West End and had the reputation as ‘the next Laurence Olivier’. It was a fitting debut role for Burton as Olivier had scored a hit a decade earlier for Alfred Hitchcock in Rebecca, another Du Maurier tale of suspicious love, ironically opposite De Havilland’s sister Joan Fontaine. Burton is more than matched by a magnificent, nuanced characterisation from Olivia De Havilland, who had taken a long break from films after her triumph in Wyler’s The Heiress, a film that deservedly won her an Oscar for Best Actress. The role of Rachel is demanding in a different way than Philip’s, and de Havilland brings subtlety and artistry to the part, playing sweet and kind and turning on a dime to bring a chill or a look that creates a disturbing ambiguity. She reaches depths few others could and the performance ranks with her best in The Heiress, The Snake Pit for Anatole Litvak and in The Dark Mirror for Robert Siodmak. It was to be one of her last great roles as a leading lady as film work took a back seat to her personal circumstances when she married a Frenchman the next year and moved to Paris where she was to live until her death in 2020.

Henry Koster was one of an armada of displaced Jews who fled Nazi Germany during the 1930s and he arrived at Universal hopeful to work on a single film. Together with his mentor and friend Curtis Bernhardt, they fell into a project that turned out to be Deanna Durbin’s debut film and ironically saved Universal from bankruptcy in the process. He graduated to notable A-list films with The Bishop’s Wife, with Cary Grant and Harvey, with Jimmy Stewart, but mostly helmed undistinguished properties or top director hand-me-down’s as in this case. Koster had the wit and skill to parlay a first-rate property and cast into solid entertainment and earned a crack at Richard Burton’s next film on his Fox contract, the big budget if cardboard Jesus epic, The Robe. He rounded out a respectable career by working with Brando on Désirée and on another 3 films with James Stewart.

Koster was smart enough to know that great performances are captured in the eyes, and together with ace cinematographer Joseph LaShelle they caught every glimmer of emotion in Olivia de Havilland’s luminous gaze. LaShelle won an Oscar for shooting Laura, for Otto Preminger so he knew a thing or two about lighting beautiful women, and the film is worth the admission alone for Rachel’s reaction to Philip announcing they are to marry, de Havilland cuts him down in an instant.

My Cousin Rachel is classic Golden Age Hollywood. A reminder that the product churning off the conveyor belt was truly formidable when all departments were in sync and equipped with top shelf tools and assets. The source novel, script, cast, technical and production values were all above average, and when handed to a capable director the result, as in this case, was mostly assured. The film will live in the memory because of Richard Burton’s exceptional American debut (a role for which he was Oscar nominated) and for the exquisite and timeless Olivia de Havilland in one of her signature performances.

* The property was faithfully re-made in 2017 with Rachel Weisz fully doing justice to the title role. 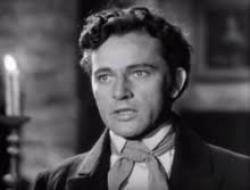 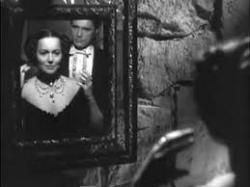 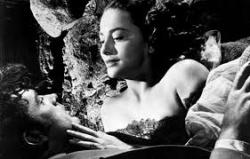 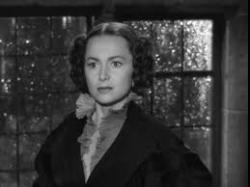 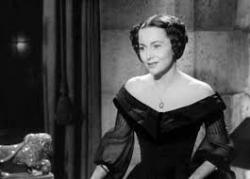