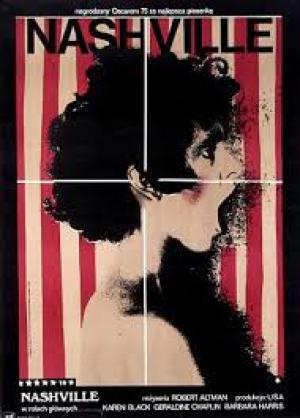 “America is the only country that went from barbarism to decadence without civilization in between.”
~  Oscar Wilde

In 1976 Robert Altman arrived at the year long party to celebrate America’s 200th anniversary as an independent nation with a present that startled most of the guests, a two and a half hour plus examination of American sensibilities and politics with a seeming cast of thousands, wrapped up with a country music bow. Nashville  confused the hell out of everyone, not least the staid country music crowd in the city of Nashville itself who were pissed off beyond measure with the film, according to Altman primarily because he didn’t use any Nashville acts to supply the soundtrack. The film is a sprawling character driven, impressionistic canvas that peels back the layers of nationalistic fervour and square-jawed patriotism and dares ask the question, “200 years on, what is and who is America?”

Altman skewers perspectives from the get go with a striking opening title sequence that suggest a mirror or shadow world, followed by a gaudy and low brow advertisement for the soundtrack album of the film itself! Tres post-moderne n’est par?  Altman took one look at a 4th wall and set to it with a post-modernist wrecking ball. The political subtext is introduced early as Altman unleashes a roving van with a  loud speaker spewing quasi liberal or populist platitudes to stir up the local rednecks. Haven Hamilton (Henry Gibson) soon gives us a conservative perspective on the America his redneck friends subscribe to with his recording session for a putrid dose of patriotic tosh called 200 Years.  Haven gets frustrated with the long-haired piano player, Frog, and removes him from the session after telling him to get a haircut. A gospel session introduces us to Linnea (Lily Tomlin) a housewife and mother of two deaf children who is being hit upon by the vain but talented Tom (David Carradine) a philandering folkie in a too hip trio.

Altman propels the narrative not through story components or artificial, imposed momentum but simply by weight of character as events unfold in their own sweet time. A mainstream star called Barbara Jean (Ronee Blakely) arrives home to a huge and choreographed welcome at the airport, with marching girls and press coverage. In true country music style she’s suffered illness and calamity via a fire but she soldiers on. Speaking of which, one of her ardent fans is Pte Kelly (Scott Glenn) a Vietnam Vet who is in the crowd and Altman alludes to the divide within the nation as hippie Tom says to Kelly, “How ya doin’ Sarge, kill anybody lately?”   Barbara Jean collapses and a pretty pretender called Connie White (Karen Black) steps in, but there’s no love lost between the pair even though Connie is popular but obviously less talented.

The political subtext finally bubbles to the top as a political operative for the Replacement Party and its independent presidential candidate Hal Philip Walker wants to organise fundraising events for his man involving the country music stars. Haven is courted as to the possibility of him running for the party but his natural inclination politically seems to run to fascism rather than populism. The loudspeaker pronouncements include demands that religions and churches should pay taxes and they should limit the numbers of lawyers in Congress, so the Replacement Party seems a world away from Haven’s redneck fans. The whole pack of hopefuls and stars in the country music scene converge on the massive Parthenon, a full scale recreation of the original in Greece, and its grandiose, if uber-kitsch scale seems appropriate to serve as the backdrop for what follows.

The glaring pomposity and overwrought emotionality of mainstream country music proved a revealing metaphorical medium for Altman to interpolate his trademark cinematic motifs. Incredibly, Altman managed this sleight of hand by having most of his lead actors write their own songs for the film and even more remarkably, it worked. Henry Gibson managed to step into a role Robert Duvall was slated for (Duvall would write and sing his own songs a few years later in Bruce Beresford’s Tender Mercies ) and wrote some of the slyest parodies to be found in a feature film, so accurate they could pass as standard Nashville gruel. Ronee Blakely was only commissioned to write the songs for the character initially, but Altman had difficulty casting the Loretta Lynn type role and by the time the camera cranked on the first scene it was still open, so Blakely stepped in as Barbara Jean. Keith Carradine supplied his own characters key song, I’m Easy  and won an Academy Award for Best Song!

The framing device of the various songs enabled Altman to keep the satirical dimension of the script to a subtle level for the most part, but the game is given away by the closing anthem, again written by Carradine, called It Don’t Worry Me.  The song plays out in the post ‘assassination’ event as the concert singers and the audience intones the chorus, “you may say that I ain’t free, but it don’t worry me”,  a sly summation of the cost of trading liberty for control by the establishment. Altman uses a couple of linking devices, one being the appearance of Opal (Geraldine Chaplin), a BBC journalist who views America as a never ending freak show of sorts, “it’s America, those cars smashing into each other”  she tells Linnea during the freeway pile up sequence near the start of the film. That sequence, as well as the final part of the airport sequence is done in a deliberate slapstick fashion, an affectionate throwback to silent era American film.

Altman’s typical use of multi-character and many stranded connections makes a grand tableau of types, as Nashville throws up every conceivable kind of character chasing or hustling the American dream. Linnea gives the film heart, a decent housewife bringing up two deaf children until she is seduced by the folk singing Lothario. In one of the films most powerful sequences she listens as Tom sings the delicate and sensitive I’m Easy,  the antithesis of most bland Nashville country music fare, as she sits mesmerised and touched by the tender tune. Altman skims the room and it’s clear there are three women who all think Tom is singing the song just for them. Altman had Louise Fletcher cast as Linnea and at her suggestion Altman wrote the characters of the children as being deaf because Fletcher had deafness in her own family. Fletcher bowed out but the deafness stayed, and it adds a subtle and touching layer of humanity to proceedings.

Altman was offered the chance to make a film involving country music in Nashville by United Artists because they had recently acquired a publishing property and could make use of some of the songs they now owned. Altman didn’t like their script but liked the idea and sent Joan Tewkesbury, his regular screenwriter, to Nashville to observe and report. Her diary became the launching point for Altman’s film, which ironically UA hated and rejected, forcing Altman to find another buyer. Altman used the bespoke songs beautifully, fully framing a large percentage of the running time while he eschewed a conventional score for the background music, favouring a diegetic soundtrack instead.

America in 1975 seemed to be at a major turning point, only months earlier Richard Nixon resigned in disgrace after the Watergate scandal and his cronies were still being sentenced into 1975. The country was still mired in the horror of Vietnam, an issue that had rent the country asunder in the previous decade and suffered the ignominy of defeat there after the fall of Saigon in April 1975. The political divide after the Kennedy assassinations seemed to polarise the American electorate in way not seen during the post-war consumerist boom years. Altman wanted to examine that divide as America celebrated its 200th anniversary as a nation. The idea of a ‘Replacement’ party was a satiric device that challenged the status quo, as Altman addressed anti Catholicism and racism under the rubric of a celebrity obsessed culture. In Nashville it seemed that anyone from Hollywood was viewed as a communist by conservatives like Haven. The image that the citizens have of their town is shattered by the gunshots at the end as a wounded Haven pleads, “This isn’t Dallas, this is Nashville”.

Altman’s cynicism perfectly suited the tenor of the American Renaissance era of cinema where a generation of younger filmmakers turned to a deeper realism and a darker themed aesthetic. Altman may not have been of their age group but in many ways he was their spiritual father during one of the most fertile and creative periods of American film. Nashville  remains a confounding film for many people, but once you succumb to its charms there are joys to be had in every frame. Robert Altman continued his picaresque journey through studio and independent film and in many ways Nashville  represents a career peak as the ‘70s zeitgeist suited his idiosyncratic approach. Once the private equity corporations got hold of Hollywood in the ‘80s the era of the maverick American auteur making studio films was over. Altman found other ways to skin the production cat and would make several brilliant films in the decades to come. 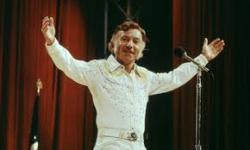 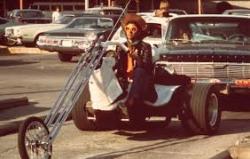