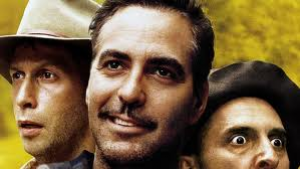 O Brother, Where Art Thou?

No depression... with a litttle sex

The Coen Brothers continued their quirky cinematic adventures by applying their trademark oblique humour to both Homer's The Odyssey  and to depression era chain gang escape drama's, finding an unlikely nexus and continuing their fine comedic tradition of 'taking the piss'. This film represented a culmination of a particularly hot streak for the pair, with Fargo  and The Big Lebowski  coming immediately before it, and the odd misfire The Man Who Wasn't There  coming soon after. Apart from the central Homeric conceit there's a sweet send up of Hollywood pretentiousness in calling the film what they did, as it's the title of a fictional film that never gets made in Preston Sturges' seminal comedy Sullivan's Travels  from 1941. That film was to be, in the words of it's fictional director, "... a document. I want to hold a mirror up to life. I want this to be a picture of dignity, a true canvas of the suffering of humanity",  "with a little sex",  replied the Hollywood producer, "with a little sex"  agrees Sullivan.

Three men escape from a chain gang and head off in search of hidden loot from a job one of them, Everett (George Clooney) says he pulled. They join a blind man on a rail car who prophetically warns them of dangers ahead. Everett's partners, Pete (John Turturro) and Delmar (Tim Blake Nelson) then encounter a series of adventures in search of the "great fortune"   including hooking up with a famous gangster, 'Baby Face' Nelson, and a blues singer-guitarist who's sold his soul to the devil at the crossroads. The boys record a folk song with the guitarist, Man of Constant Sorrow,  calling themselves the Soggy Bottom Boys, and it becomes a regional hit without their knowledge as they continue their quest. The trio is lured by beautiful sirens to a riverside ritual, and separated after they are drugged. Everett and Delmar are then mugged by a 'Cyclops', a one eyed Bible salesman (John Goodman) but eventually spring Pete from jail to set off and complete the quest. Everett has to confess there is no hidden loot, he used the story as a ruse to escape intending to reconcile with his estranged wife and family. A Klan interlude and a political rally sees them potentially triumph as being the new sensational singing group they get a pardon from the Governor. Everett however needs to find his wife's ring and they go to his valley home only to be caught by the relentless pursuing lawman and are about to be hanged when they are saved by a flood caused by a dam being opened deliberately to flood the valley.

The Coen's take a pickaxe to the idea that 'things were better then', a concept that most generations embrace as the mist of nostalgia makes a clear eyed assessment of the past impossible. The America they present is patently one that may have existed only in Hollywood, something that Sullivan's Travels  even admitted in 1941. The level of suffering of the ordinary person in the depression makes it clear that also having to negotiate the clawing and greed from the type of politicians the Coen's satirise would have made life very tough for the average man. Battered from every side, from the carpetbaggers to the corrupt politicians, to the brutal and unfeeling law or the hate of racist groups and having their land flooded and taken away by the government, the poor take solace in the music and rituals of the period, and in the healing and unification it offers. Radio is a beacon for hope and escape, but also for relentless advertising, it's a trade off between the commercial and the sublime. Everthing comes at a cost.

The film is chock full of memorable images and sequences, especially the incredible flood sequence, but also the fiery barn, "fella's we're in a tight spot",  the river baptism, the Siren's song, the Klan choreography, the joy of the boy's singing at the concert "it's the Soggy Bottom Boys"!!  and Goodman's turn as the malevolent, one-eyed and outwardly cultured brute is a high point. The Coen's task of pulling what amounted to a fusillade of vignettes into a coherent whole was made much easier by the movie star presence and sheer likeability of George Clooney, channelling his best Clark Gable avec moustache. Clooney's Everett is the heart of the film, giving it a fulcrum on which to turn and his inherent sweetness and conviction in the 'better angels' of human nature makes it a hard heart who can't respond in kind. Turturro's doubting, suspicious Thomas is a great counterpoint to the lightness Everett and Delmar bring, and his salvation takes a religious tinge as opposed to Everett's explanation and hope for an impending "age of reason",  echoing back to the baptism and the simple hope that faith engenders. Ironically, it's the skeptical Everett who turns to prayer just before the flood that saves them.

The Coens essentially use the framework of Homer as a vehicle to both parody and edify an idea of America, one that is tied into its own mythic symbols and codes. They satirise the language via Everett's elaborate and ornate use of speech, and the culture via the grotesqueness of the politicians on show, the Klan rituals, the religious ceremonies and at the same time they affirm the eternal beauty of the folk music of the South and the sense of community of the common man.  O Brother, Where Art Thou?  may have its tongue firmly in its cheek but its heart is also in the right place. The cinematic language and feel for time and place the Coens have holds up yet again, with Roger Deakins' beautiful photography evoking the spirit and mood of the region. The music is magnificent and fully in sync with the film's tone, in fact it contributed so significantly to the film's success that it helped kick-start the whole 'Americana' music movement on the back of it.

Joel and Ethan Coen have made a career of dipping in and out of genre and style, and proving very adept at most styles they attempt. This was their third attempt at 1930's America, their most popular period of choice when looking backwards as they covered Screwball Comedy with The Hudsucker Proxy,  to slightly lesser effect, and the Hollywood studio system in the excellent Barton Fink.  After O Brother  they spent half a dozen years producing what were mostly lesser films compared to their usual quality before storming back to form with the remarkable and chilling neo-noir, No Country for Old Men.  They re-visited a musically themed film again with the stunning Inside Llewyn Davis in 2013, where T-Bone Burnett again helmed a remarkable soundtrack that essayed folk music in Greenwich Village in the early '60s with a harder and more cynical eye than the one they employ here. O Brother, Where Art Thou?  remains a wonderful entry in the Coen brothers canon, breezy entertainment and great fun. 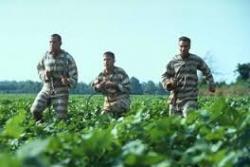 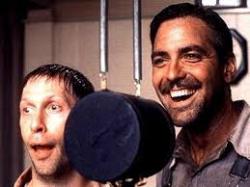