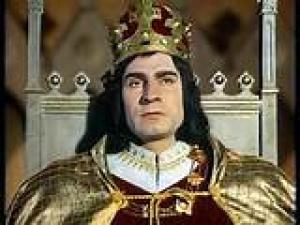 In March 2015 an historical wrong was righted and the earthly remains of King Richard III were finally buried in Leicester Cathedral with honours befitting an English king. Incredibly, his remains were lost for 5 centuries, after the church where he was buried was destroyed during the Protestant Reformation, but an archaeological excavation of a modern day car-park turned up his misshapen bones in 2012. It seemed apposite to re-visit his story via Shakespeare’s immortal play, which was more propaganda than history, loaded against Richard’s House of York in favour of the subsequent Tudor dynasty, and what better way to start than with Laurence Olivier’s filmed version from 1955.

Laurence Olivier had garnered a reputation as the pre-eminent theatre actor in the world by the mid-1950s, but his film legacy was an uneven one to say the least. After the undoubted triumphs of his two previous Shakespeare adaptations in the mid-1940’s he had focused on stage work in the company of his wife Vivien Leigh, and mounted many productions of the Bard’s work far and wide, even touring Australia for the Old Vic Company where the couple were received like rock stars. The Olivier’s returned to the UK and settled into a series of theatrical triumphs, including Vivien’s turn in A Streetcar Named Desire  and a trio of Shakespearian plays presented at Stratford-upon-Avon. Olivier had hoped to produce a filmed version of one of those productions, Macbeth,  and asked his friend Alexander Korda to produce it, but Korda thought that Oliver should first do the more commercial Richard III,and if that made money he’d then produce the Scottish play on film. Olivier agreed but passed over Leigh for the key role of Queen Anne, casting the younger Claire Bloom instead, an actress with whom he then had an on-set affair while Leigh busied herself filming Terrence Rattigan’s The Deep Blue Sea.

Olivier’s Richard III actually starts with scenes from previous Shakespearian plays on Henry VI, in order to set up the context of the court struggles for modern audiences, something not needed in Shakespearian times as the characters and the history was relatively recent and well known. Richard, Duke of Gloucester (Laurence Olivier) is a well-connected noble man, much favoured his brother, the aging and dying king, Edward IV (Cedric Hardwicke) unaware of the machinations and intrigues Richard is involved in against his interests.  Richard plots relentlessly, even at the expense of their own brother’s life, George, Duke of Clarence (John Gielgud) and is named Lord Protector of the two young princes, his nephews, after the king dies. Richard disposes of erstwhile allies and plots to take absolute power for himself by denying the young princes the chance to come to power. His behaviour drives other nobles to take up arms against him and the score is settled in battle and in blood on the plains of Bosworth Fields.

Olivier presented a Richard of his time, that is to say one where the language was carefully handled in the traditions of the English theatre and the cadence and beauty of the words held sway over the grit of the intrigue of the protagonists. Thankfully the words are things of beauty and power in themselves, with Richard’s astonishing opening soliloquy (Now is the winter of our discontent…) standing as one of the most electrifying passages in all of Shakespeare’s works and a pearl in the canon of English literature. Richard’s alarming honesty in taking a personal stocktake, his “descant on mine own deformity”  spills forth like a rattlesnake devouring itself, but he leaves plenty of venom in reserve for those around him. It’s clear he’s projecting contempt for himself onto others, and at least has the advantage of self-awareness, a ‘scorpion’ king who acts entirely within his nature in regards to the ‘frogs’ he considers himself surrounded by.

Olivier agreed to direct after his first choice, Carol Reed, became unavailable. He then peppered the ensemble with the cream of Britain’s acting talent, including old friends John Gielgud (even though he’d wanted Orson Welles to play Clarence) and Ralph Richardson in key roles. He cast the young Claire Bloom, recently made a star by Charlie Chaplin in his great theatre homage, Limelight, and she delivers a startling performance as the conflicted Anne, “O let me die that  may look on death no more,”  seduced and abused by the manipulative Richard. Vivien Leigh was disappointed that her husband passed her up for the role, roles in the film, but their marriage proved to be in terminal decline, made sadder by a late term miscarriage during Olivier’s filming of The Prince and the Showgirl  a few months later.  The wonderful cast is fleshed out by veterans Laurence Naismith and Cedric Hardwicke, as well as the up and coming Stanley Baker, who makes the best of the small part of Henry, the first of the Tudor kings.

Olivier co-wrote the adaptation with Shakespeare scholar Alan Dent and had the good sense to set the story up as legend and myth, rather than history. Olivier decided the visual palette of the film would approximate the looks and hues of a medieval tapestry, and rather than duplicate the heavily choreographed and epic battle scenes of his Henry V,  he made the fight a series of smaller, isolated events which focused their intensity. Where he’d made his Henry V  and Hamlet  characters more masculine in their physicality, this time he keeps the mental dimension of the title character as the central focus, in keeping with the portrait of the sinister schemer. He modelled his characterisation of Richard on a reptile, particularly in the famous death scene, and also took an actual arrow to the leg during the filming of the battle scenes, where the crack archer was supposed to shoot a large cork sheet at the front of the horse and missed, hitting the actor in the calf! Fortunately the injury was in the leg where Richard had a limp, and the shooting schedule was barely interrupted.

Korda sold the film to NBC for a lucrative television screening, but the tactic back-fired when the box office was subsequently poor, most people in the US having seen it already. Korda dies soon afterwards, and with him any hope of mounting Olivier’s Macbeth  as a film. Richard III  nevertheless enjoyed great critical acclaim and it remains one of the finest versions of any Shakespeare play on film, a professional highpoint in a period where Olivier and Leigh were increasingly estranged. Their secret pain was the mental illness that dogged the beautiful actress, which made any work together a fraught proposition. Olivier also had to endure her affair with Australian actor Peter Finch during this period and it culminated with him spurning her for the role of the showgirl (which she’d played opposite him on stage to great success the previous year) in his tepid costume drama, The Prince and The Showgirl,  in 1955, in favour of the younger and more glamorous Marilyn Monroe.

Laurence Oliver made Richard one of the greatest screen villains of all time, a ferocious and deadly sociopath, “I can smile, and murder while I smile”,  while he scrambled for power in a feudal system that respected only blood and force. The irony in that is that modern DNA testing reveals at least 20% of those feudal heirs were not fathered by the royals they claimed to be sired by, and Richard’s bloodline is no different. “I am in so far in blood that sin will fall on sin”  Richard coos, as he cuts a sexual and murderous swathe amongst both friends and enemies, giving Olivier scope for a range of expressive nuance, from dark humour to sardonic and masochistic pleasure. Richard III  is a visceral, compelling film, darkly sardonic and dripping with malice and wit deliciously rendered by a fully engaged Olivier, who had played the part on stage a decade earlier. He indelibly made the role his own, and made a film that at least matched, and in some ways surpassed his earlier Shakespearian acting and directing triumphs. 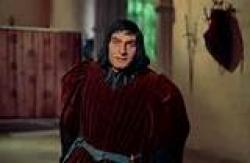 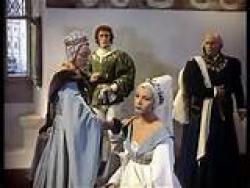 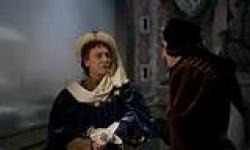 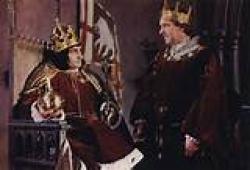 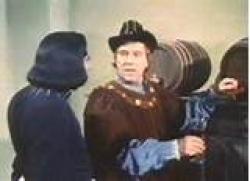 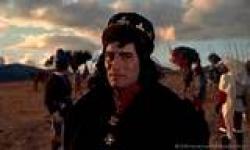