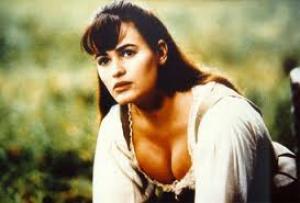 Patrice Leconte won the 1996 César Award for Best Film with the stylish and witty period film Ridicule,  set in the build up to the French Revolution in the late 1700’s. Leconte focuses on the machinations at the court of King Louis XVI and the jockeying for favour that occupies the minds of the nobility, but subtly implies that the concomitant neglect of the general population has wider implications. Leconte employed a blistering script that recalls the incision of Stephen Frear’s 1988 hit Dangerous Liasons,  and a fine ensemble cast headed by French icon Fanny Ardant. The film looks ravishing, making the most of the fine costumes and settings under the hand of cinematographer Thierry Arbogast, who would soon become a key collaborator for Luc Besson.

Baron Grégoire Ponceludon (Charles Berling) is a minor nobleman, struggling to manage his land and keep his peasants healthy because of the swamps on his land that cause fever and death. Ponceludon sets off to gain an audience with the King, convinced that the King’s love of engineering will lead to a grant of funds to drain the infested land. After being robbed on the road he’s taken in by a kindly Doctor, Bellegarde (Jean Rochefort) who schools him in the necessary rituals and games required for him to make his way at court. The Doctor’s daughter, Mathilde (Judith Godrèche) bewitches Ponceludon while he plots his course, but she becomes betrothed to a much older aristocrat in order to secure her father’s debts. Ponceludon falls foul of L'abbé de Vilecourt (Bernard Giraudeau), his rival and noted wit, but gains an unexpected advantage by discovering the Abbé and his lover, Mme de Blayac (Fanny Ardant) to be a cheats at a game of wit. Mme de Blayac, fearful of being exposed as a cheat then helps Ponceludon in his quest at court, and soon becomes the rival in love to the Doctor’s daughter for his affections.

Leconte opens with a jaw dropping sequence, Milletail, a nobleman calling on an elder aristocrat, seemingly to pay his respects. The older man, De Blayac, is chair bound and in his dotage, once renowned as “the wit of the age”, and the younger man recalls an incident where De Blayac publicly humiliated him with his caustic wit. Milletail then proceeds to urinate on the helpless De Blayac as he scolds “Where is yourfine wit now”?  The sequence serves as an indicator of the narcissism at the heart of a system determined by ‘grace and favour’, where ambitious nobleman rise on their ability to make a cutting or witty remark that entertains the court, and hopefully the King, rather than on any other measure of merit. Leconte bookends the piece with a similar incident of public belittling happening to Ponceludon, but the event leads to a different outcome as Ponceludon launches into a tirade against the superficial values and egregious vanities of the nobility

Ponceludon battles against a corrupt and moribund system in trying to get his case heard, and in the process is surprised to learn that there are no official documents verifying any ancestral claims to his family title. Mme de Blayac intercedes and the bureaucracy duly provides the much needed certification, much to Ponceludon’s amazement, the droll official merely commenting “If the truth were known half the noblemen in France would be commoners”.  The Abbé flourishes for a time in this “tyranny of wit”, but eventually his hubris is his undoing, where in a bravura display of wit he “proved the existence of God”  to the King and an enraptured court, but then committed a faux pas by offering to prove the opposite, “if it pleased his majesty”. Mme de Blayac switches her allegiance to Ponceludon, moving him seamlessly into the King’s orbit, but also maliciously destroying Matilde’s illusions regarding Ponceludon's intentions at the same time.

Leconte counterpoints the venality of the court with the plight of Ponceludon’s peasants, when a young boy to whom the Baron has a close attachment falls badly ill. The boy has a devotion to the King and is sure the almost mystical creature will help, and Ponceludon gives him a medal that he says the King has “blessed”  in an attempt to lift his spirits. Paul, a deaf-mute boy who is close to Mathilde also features, and he falls foul of Mme de Blayac and is sent to a school developing a new language approach involving hand signs, and gets to show off his new skill at court. There is no attempt to place the peasants predicament in a wider political context, as Leconte focuses on the human dilemma of a lower class completely at the mercy of the landed gentry, a class so consumed in its selfish pursuits it doesn’t notice the revolution on it’s doorstep.

The churchmen are equally complicit in maintaining a heuristic clique at the top of the social food chain, the Abbé making the condescending remark, “I could tell you a church secret.... there is no purgatory”.  This was a sly reference to the fact that there was no biblical or dogmatic basis for the poisonous medieval invention of a ‘holding’ zone (limbo) after death, where the souls of the departed wait for release, typically gained by paying a priest to intervene and say prayers for the loved one. This cynical conceit was primarily constructed as a revenue raising device for a church run more along business lines than any notion of care and mercy.  Another cleric, L’abbé de l'Épée, is at least concerned about helping the vulnerable, a real historical figure who founded the first public school for the deaf, who runs a demonstartion at court where Paul excells.

The cast is uniformly fine, and Berling has the quiet charm and style to pull off the demands of the pivotal central role. Judith Godrèche is luminous as Mathilde, effortlessly embodying the qualities required to contrast the grasping desperation of Mme de Blayac and the courtesans. Fanny Ardant plays her archly malicious and scheming aristocrat with a delicate relish and Bernard Giraudeau is entirely memorable as the treacherous Abbé. Jean Rochefort continued his long and mostly fruitful association with Leconte, one that extended back to 1975 with Les vécés étaient fermés de l'intérieur,  and ironically a role Rochefort considered one of the worst in his long career. Leconte more than made up for that debacle by giving Rochefort meaty roles in several of his films before giving him one of his greatest parts in the brilliant, The Man on the Train,  in 2001.

Ridicule  remains a high point of French costume and period cinema and an incisive window into the machinations of a system out of touch with reality. The film benefits immensely from a superb score by Antoine Duhamel, which adds a layer of authenticity and polish to an already rich and detailed production. Patrice Leconte has proved to be the master of the cinema of human relationships, perhaps the natural heir to Truffaut in many ways, and work like Ridicule  affirms his capacity for creating films of great heart that also exercise the mind. 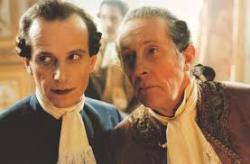 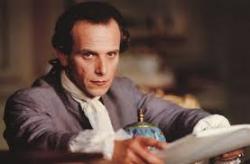 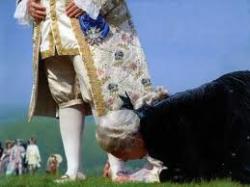 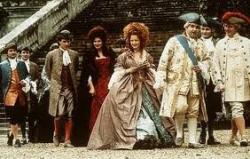 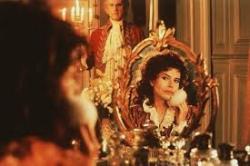