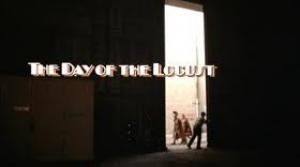 The Day of the Locust

"Hollywood is an extraordinary kind of temporary place." ~ John Schlesinger

John Schlesinger moved seamlessly from the early ‘60’s British New Wave triumphs of Billy Liar and Darling, into the edgy American Renaissance era via his own Atlantic crossing which saw him win the Best Director Oscar for the Best Picture winning Midnight Cowboy, by the turn of the decade. On the back of that succès d’estime he found himself in a position to essay any topic he cared to, and in this rarified air he turned his attention on his next two films to subjects close to his heart, homosexuality in Sunday Bloody Sunday, and the movies in The Day of The Locust. Nathanael West’s bitter novel about alienation and self delusion in old Hollywood was turned into a screenplay by Waldo Salt, a former Blacklist survivor who had adapted Midnight Cowboy, and who'd won the Oscar for Best Adapted Screenplay for the effort.

Tod Hacket (William Atherton) is an aspiring artist keen to break into the movie business; he moves to Los Angeles and takes a low rent apartment. Tod falls in love with another resident of the block Faye (Karen Black), an ambitious actress whose use by date has come and gone, and soon the destinies of both intertwine. Faye uses her dubious charms to exploit Homer (Donald Sutherland), a quiet accountant who helped her door to door salesman father (Burgess Meredith) after he’d fallen ill. Tod still carries a torch for Faye, but she moves in with Homer and continues to dream of stardom.

Schlesinger opts for a bleak and semi-surreal take on the dubious allure of golden era Hollywood, having something more in common with the visual style of Fellini and his grotesques than with classic era film. Legendary cinematographer Conrad Hall shot the piece like an extended dream, awash with California sunlight and hissing with summer ambience. The film works as a series of telling vignettes rather than linear narrative, with odd and fractured characters arriving and disappearing without warning, adding colour and context if not clarity, and subtly contributing to the deliberate air of desperation and confusion.

Schlesinger’s casting proves to be pin point with Karen Black, queen of the American Renaissance era, shining as the too needy actress who falls prey to the standard traps an attractive woman in Hollywood often did. William Atherton plays Tod as a man in a fog, struggling to come to terms with the dog-eat-dog ethos of the town, but sensing he can have a piece of the pie if he’s prepared to sell his soul, an opportunity for doing so around every corner. Donald Sutherland provides one of his most memorable roles in the brow beaten Homer Simpson, a non-descript and emotionally stilted man in the thrall of Faye’s dubious charms. The supporting ensemble provides equally convincing work, Jackie Earle Haley unforgettable as the odious (female) child star wannabe, Adore, who gets her unexpected and vicious comeuppance.

West’s novel addresses the alienation of the outsider, washed up on California’s sunlit shores and dreaming of getting ‘inside’. The characters are ciphers, mocking the idea that that depth is rewarded in the entertainment sausage factory, and adding to the semi surreal air of events. A telling aside is a mention of someone needed for “re-takes of Nanook of the North”, the joke being that the film was a documentary, or promoted as one, and therefore what you see on the screen can’t be trusted. West presents unlovable, desperate and marginalised people, devoid of empathy and unable to elicit any sympathy in the process, it’s one continual freak show to heighten the point. Schlesinger succeeds in revealing the melancholy counterpoint of the banality of lives lived with the glimmer of fame seducing them into a deluded and dysfunctional torpor.

The Day of the Locust is a film that represents 1970’s New Hollywood, with all its reimagining of American cinema post Bonnie and Clyde, coming to terms with old Hollywood, admitting that both eras have more than a whiff of the desperate freak show about them. Oddly, there is also affection and pathos amidst the cynicism and derision, like a family member looking fondly on a mad grandparent. A weird and wonderful ride. 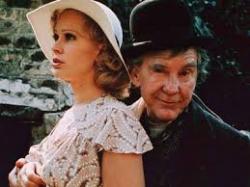 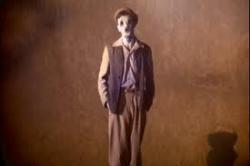