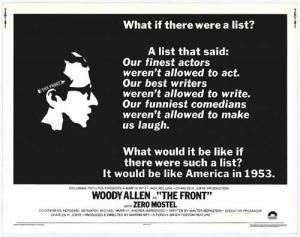 Director Martin Ritt and screenwriter Walter Bernstien were both blacklisted by the industry after being called before HUAC in the early 50’s and this fictionalised account of the effects of the blacklist on the arts community is set in the glory days of live Television in New York. The opening consists of news-reel shots of life in 1952, fashion and movie stars and the Korean war, as Sinatra croons ‘Young at Heart’ and Eisenhower kisses babies, a sweeter and more innocent time it suggests to the audience of 1976 when it was made. Only when the newsreel items includes footage of the Rosenbergs being imprisoned (they were later executed with much doubt remaining about Ethyl’s complicity) does it take a dark twist, not such an innocent time after all.

Howard Prince (Woody Allen) is a small time cashier with a gambling problem, his old school friend Alfred Miller (Michael Murphy) is a successful writer for TV, but has a problem as he’s been blacklisted for alleged communist sympathies and needs someone to ‘front’ for him, in order to keep selling his work, Howard agrees. The TV company loves the work of this new unknown writer, especially script editor Florence (Andrea Marcovicci) who finds herself falling in love with the mind of the new writer. Bernstein doesn’t explore the ‘Cyrano de Bergerac’ possibilities, preferring to focus on the political elements and the personal impacts of the blacklist. Producer Phil Sussman (Herschel Bernardi) is also impressed with Prince, but also has to be sure he’s ‘clean’ as far as his sympathies, which has become a problem for the star of the TV show Hecky Brown (Zero Mostel). Hecky has been summoned by Hennessey, a Government inquisitor attached to the standing committee, to be told that he’s being named as a ‘red’ unless he ‘names names’ as a ‘friendly’ witness. Hecky complains that he was only a member of the Communist Party for a short time in order to ‘get laid’, besotted as he was by a girl with a ‘great arse’. Hennessy cautions him to ‘repent, but repent sincerely’.

The TV show is a smash hit, Howard organises a date with Florence, but realising he’s out of his depth if she talks about writing he attempts to get informed in a hurry, ‘give me two Hemingway’s and a Faulkner’ he tells his local bookshop. Howard’s gambling debts increase, and he asks Alfred if there are any more writers he can ‘front’ for, thereby increasing his income via his commission. Phil has to fire Hecky, who refused to co-operate with Hennessey, and Florence resigns in disgust, vowing to fight against the blacklist and trying to enlist the ‘apolitical and apathetic Howard. Hecky gets desperate and asks what he can do to be taken off the list, Hennessy asks him to spy on this new writer who they have no information on, Hecky agrees. Howard and Hecky go together to an out of town club show, where Hecky is taking the only work he can get, at reduced rates. Hennessey subpoena’s Howard, and his writer friends disagree about the testimony he should give. Alfred is in hospital with an ulcer, the strain taking it’s toll on him. Howard can see how insidious the blacklist is, and says to Florence’ all it takes is for one person to say no’. Hecky visits Howard, regretful of having sold him out to Hennessey, something Howard is unaware of, ‘the water is full of sharks’ Hecky tells him, as he leaves.

Hecky goes to a luxury hotel, drinks champagne and commits suicide. Howard goes before the standing committee, his network arranging a private hearing which should be a formality. Howard begins with a strategy of ‘answering, but not answering’ thinking he can outsmart the questions. As the hearing progresses it’s clear his evasion won’t work, and when they ask a question implicating Hecky Howard simply says, ‘I don’t recognise the right of this committee to ask those kind of questions’, before underlining it with ‘go fuck yourselves’. Howard becomes a hero to the left, as Frankie croons ‘Young At Heart’ once more..

Part satire and part drama, the mix is able to point up the absurdities as well as the evil inherent in the blacklist situation. Allen is a good choice as the guileless foil making it possible for his political neutrality to be eroded as he has his eyes progressively opened on behalf of the audience. Ritt is able to hit some blackly comic marks by reminding us that an industry capable of this kind of betrayal and duplicity thinks nothing of re-writing a touching holocaust gas chamber scene in the show, because the sponsoring gas company thinks "it makes gas look bad". All the arguments from the era are laid out well, including the line that encouraged people to ‘name those they already know’. The harm that could come from that was varied, as both Elia Kazan and Sterling Hayden did so, Kazan seems to have coped with the choice through sheer bloody minded force of stubborn will, but Hayden struggled for years with what it meant to him to have done so. Hayden wrote of having to testify to HUAC in his autobiography, "I don't think you have the foggiest notion of the contempt I have had for myself since the day I did that thing."

Mostel is the heart and soul of the piece here though. The decision to ‘rat’ on his friend Howard tortures him until he can take no more. Hecky’s suicide was based on an actual event, as was his club show in the Catskills where he was ripped off and exploited by management. Ritt takes his lead from Antonioni’s The Passenger in the way he shows the death, it’s Hecky’s absence from the room that resonates profoundly. The film is a smart framing, for a generation removed from the events, of how insidious the blacklist was, and how it destroyed people. The ‘cold war’ hysteria that HUAC exploited showed that a people in fear are capable of sanctioning state sponsored fascist tactics, something that should not be lost on the 9/11 generation. 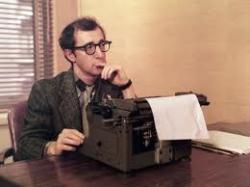 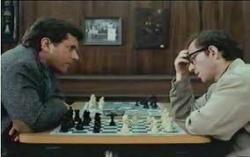 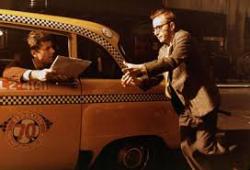 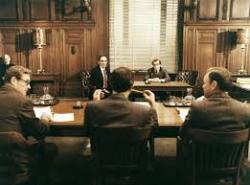