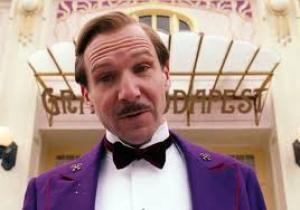 "(In order to deepen our understanding of reality) we must break through the crust of realism which blinds us and reach beyond to the tender, cruel, ironic, playful, almost dreamlike universe..." ~ André Bazin

The singular Wes Anderson confection, The Grand Budapest Hotel,  affirmed his ability as a whimsical auteur without peer in contemporary American cinema as he reached new heights of filmic achievement. Wes took as his inspiration the work of the mostly forgotten Austrian writer Stephan Zweig, who enjoyed prominence during the Weimar Republic era between the world wars and who died in 1942. Robert Yeoman continued the extraordinary run as Anderson’s cinematographer of choice, helming as he has all of the live action feature films for Wes. Anderson also called upon many of his stock company like Bill Murray, Owen Wilson, Adrien Brody and Harvey Keitel and decamped to Germany for the filming, as much of the financing was sourced from there in a co-production deal. Outside of the trademark visual acumen, Anderson also dips his toe in the geo-politico waters and produces an arch commentary on the nature of greed and fascism.

Like a Russian Matryoshka doll the story opens up with a flashback within a flashback as an older writer in the 1980’s (Tom Wilkinson) recalls the time in the 1960’s when he was told a story from the 1930’s! The same writer as a younger man (Jude law) is at a run down and formerly glorious hotel in a fictional Eastern European country, where he meets the mysterious owner Zero, (F. Murray Abraham) who relates the tale of how he came to acquire the Grand Budapest Hotel. Zero relates the tale of M. Gustave (Ralph Fiennes) the concierge for the hotel in its glory days, and one of the most accomplished and admired men in his profession. Gustave takes Zero under his wing to train him in the invisible arts of the Lobby Boy, and to mentor him so that one day he might rise to the exalted position of concierge. Events take an unexpected turn when an elderly client, Madame D (Tilda Swinton) leaves Gustave a very valuable work of art, and suddenly he finds his life is in peril as the jealous son Dimitri (Adrien Brody) takes action.

The story within a story motif is a deft sleight of hand by Anderson, a way of linking the present to the past and of personalising the faded grandeur at the centre of the tale. Zero, (the name itself suggests a stripping away of all unnecessary accoutrements) is a metaphor, a cipher for examining the proposition, ‘when all else is stripped away, what is left’? The answer is love. The only thing about the telling of the tale to the writer that brings Zero undone is the mention of his true love, Agatha (Saoirse Ronan). The writer recognises something in Zero, seeing him as “lonely, a symptom of my own medical condition.”  Agatha represents the kind of purity that Anderson idealises in every film he makes, as he sees life as a battle between innocence and elements that degrade and defile, in other words the forces that require one to live with grace under pressure.

Yeoman and Anderson ramp up the storybook visual motifs, ones that they’d hitherto explored in Moonrise Kingdom,  but ramp up the rococo eye candy by a power of ten. Yeoman, a master colour photographer, pulls out a dazzling mix of technical prowess and high art in a series of gorgeous and memorable images that adds another layer to Anderson’s whimsy. The film revels in an incandescent artificiality, with a deliberately retro driven aesthetic according to Anderson, "The particular brand of artificiality that I like to use is an old-fashioned one."   The use of miniatures instead of CGI makes for a crispness and depth not found with purely computer generated effects.

The glory of the images presented acts as a stark counterpoint to Anderson’s subtle political subtext.  The hotel functions as a symbol of achievement and beauty, a glorious architectural hymn to a bygone era, but Anderson shows us this is a façade and that underneath there is decay and corruption. The human embodiment of this idea is found in the upper-class family of Madame D’s, aristocratic on the outside but rotten to the core. The added element of playing out a personal drama in a country in the throes of an unspecified military action is an old idea, Bergman used it superbly to dramatic purposes in his masterful The Silence,  and it works well in quasi-comical way here. The soldiers represent the crude lack of refinement that M. Gustave despises as he maintains his equilibrium in the face of the fascist jackboot, but Anderson’s bleak denouement reminds us that Europe in the 1930’s was no picnic and that superior breeding in the face of a rifle squad is not an even fight.

As with Anderson’s best work the piece hinges on the interaction of the talented ensemble cast, centred on a pivotal lead that represents the emotional heart of the film. As with Gene Hackman in Royal Tenenbaum’s  and Bill Murray in Life Aquatic,  Ralph Fiennes anchors the film brilliantly, providing one of the most memorable characters in all of Anderson’s work. Fiennes cool bravado and deathless delivery gives his character a Zen-like stillness in the face of a crumbling society, outwardly civil but fracturing at the seams, as he looks for “faint glimmers of civilisation left in this barbaric slaughterhouse once known as humanity.”   It is one of the great comic performances in modern satirical comedies, touching and believable as it walks the tightrope perfectly between intellect and emotion. Fiennes ability to drop A-grade profanities as if they were pearls from the Bard is hilarious, as well as arch lines like “It’s quite a thing, winning the loyalty of a woman like that for 19 consecutive seasons.”

Anderson’s signature trope, of promoting grace under pressure and valuing purity of spirit in a society descending into shabbiness is central to the film. Normally Anderson examines the foibles and nuances of the American upper-class (quietly exploding the myth that America is a classless society in the process) but here his particular shtick is well suited to the vanishing aristocracy of middle Europe. Zero, who cannot bear to close the dilapidated hotel because of his love for Angela, says tenderly of his mentor Gustave,  “his world had vanished, but he maintained the illusion with a marvellous grace.”  Gustave’s propensity to lapse into verse at the drop of a hat is indicative of his belief that poetry will overcome reality, bringing a magic and class to the mundane.

Wes Anderson, like Terry Gilliam, is an unsung master of Magical Realism, the whimsical genre mostly associated with French directors like Jean-Pierre Jeunot and Michel Gondry. Anderson has marked himself as possibly the finest practitioner of the form in the new millennia, able to tap into its ability to incorporate both joy and melancholy, sometimes in the same frame. The Grand Budapest Hotel is a glorious modern cinematic gem, full of charming conceits, delicate  and beautiful performances from an A-list ensemble cast; it stands as one of Wes Anderson’s finest constructions. 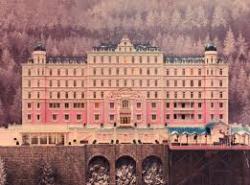 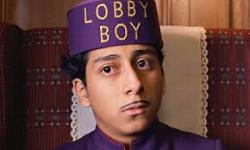 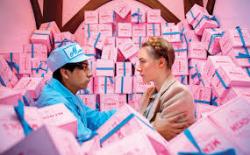 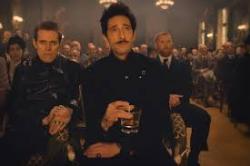 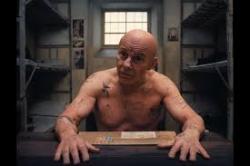 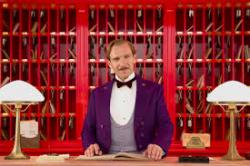