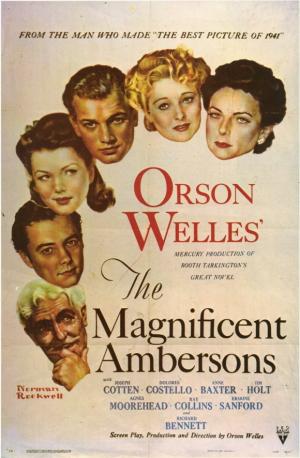 'The enemy of art is the absence of limitations.' ~ Orson Welles

So said the man who started his film career with almost no limits attached, and by the time of his follow up film, The Magnificent Ambersons, reality was starting to bite. Whatever is left in this film that represents Welles' vision is hard to tell, but what is available in the 88 minute released version on Warner DVD is still very much worth viewing. Orson Welles had done a radio play of the Booth Tarkington story in 1939 and set his stock company of Mercury Players to work on the film version as his second project for RKO. His first, Citizen Kane, while something of a cause celebre committed the ultimate sin in Hollywood, it didn't make money, so the pressure was on for Welles to deliver a film with a mind to budget and also a commercial running time, neither of which he managed. Welles designed an elaborate set, the centrepiece of which was a three storey staircase and it was involved in a memorable scene that exists in the released cut between George and Fanny and also in the ball scene that was then cut severely, but RKO made good use of the set for years to come. The film is a meditation on progress, or the relentless need for change and re-invention, a theme that could serve as a metaphor for the life of Orson Welles himself.

The film opens with a sequence of the changing of men's fashions in the late 19th century. Welles himself provides the voice-over as the action moves to an 'anytown' USA where the Amberson mansion is the pride of the town. The Amberson family is well known as an old money and established institution and anything that involves them is the talk of the town. Gossip swirls around daughter Isabel (Dolores Costello), who is being courted by a non-society type Eugene Morgan (Joseph Cotton), and while Eugene is the love match, Isabel settles on Wilbur Minafer, a dull but aristocratic type or 'one of us'. Welles' camera moves and lighting is trademark stuff at this point, angular and dense it makes the gossipy tidbits move and bite as he sets a cracking pace. The Minafer's have one son, George (Tim Holt), who's progress from boy to young man disturbs the entire town, as he turns out to be one of the more spoiled brats in history. The entire town can't wait for George to get his 'comeuppance'. Eugene had left the town and made his fortune in the new world of automobiles and he returns a wealthy self-made man, with his beautiful young daughter Lucy (Anne Baxter). At a grand ball at the Amberson mansion George meets and falls in love with Lucy and Welles claims this sequence had one of the greatest shots of his career but that RKO cut around 20 minutes out of it after they rejected Welles' first 148 minute cut of the film.

George's Aunt Fanny (Agnes Moorehead) is in love with Eugene and jealous of the torch he still carries for Isabel, and she tells George about their history. Welles films a comical sequence with the new fangled motor car in a refrigerated warehouse, adding to the cost but providing an authentically cold snow environment, it's a celebration of family and friendship that George does not fully appreciate or engage in. Wilbur dies suddenly and Eugene's interest in Isabel seems to be able to be resolved at last, but George stands in the way and his resentment takes on an Oedipal like dimension, cheered on by Fanny from the sidelines. The Minafer and Amberson fortunes fall into decline as the Morgan one's go from strength to strength, exacerbating the gulf felt by the petty George. Isabel is convinced to reject Eugene's proposal and George spirits her off on a world tour where she falls into an illness and returns to the mansion. Lucy sees George for the shallow fool he is and equally rejects him. Isabel succumbs to her illness as George and Fanny prevent Eugene from seeing her before she dies. Fanny breaks down and George is left to support her as the family fortune is fully eroded. George has his legs broken in a car accident and in a studio imposed ending he asks the visiting Eugene for forgiveness.

'There aren't any times but new times' is a statement made in relation to the natural order of things, as opposed to man trying to harness time and limit the march of the relentless clock. All glory is fleeting as are a man's possessions. Eugene understands this, even though he's made his fortune in a futuristic industry for when the automobile is derided by George as a damaging invention he more or less agrees, more concerned however that 'it won't add to the beauty of a man's soul'. Welles again has focused on the shallowness of accumulation, as he did in 'Kane', this time there is no 'Rosebud', just sadness and regret on the failure to recognise opportunity for real connection when it came along and to act accordingly. It's been said the first generation makes the fortune, the second enlarges it and the third wastes it away, and George proves the truism in this case. he is singularly unprepared for a future world that requires invention and adaptation, the things that Eugene has in spades, and Welles is damning of a system that supports stasis over movement, of inherited wealth over wealth that is earned.

It's easily Joseph Cotten's best role, he's wonderful as Eugene and the support around him is excellent. Agnes Moorehead is a standout as Fanny and there are some touching moments with elderly character actor Dick Bennett (Father of Constance and Joan) as the Amberson patriarch. Anne Baxter made her first impact here, even if most of her role ended up on the cutting room floor, but Welles thought highly of her and also of her Grandfather who visited on set, Frank Lloyd Wright! Tim Holt, who would go on to great success in Treasure Of The Sierra Madre is fine as George, bringing the right mix of arrogance and ignorance to the part.

Welles left the cutting of the film in the hands of his editor Robert Wise and his assistant Mark Robson, and then the battle began with RKO who eventually removed around sixty minutes of running time and re-shot a 'happy' ending. Welles was away in South America doing a film for the US government as it seems he'd bitten off more than he could chew as RKO needed a release for the Easter season, they butchered his version after uneven results at previews and Welles never forgave them. 'The cinema has no boundaries, it's a ribbon of dream' said Welles, and Amberson's with its haunting grace and melancholy nostalgia rightly takes its part in Welles' dream, its boldness and wit still standing, years after the staircase has fallen, Orson cheating nature by making a true work of timeless art. 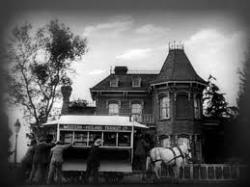 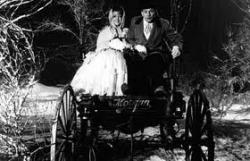 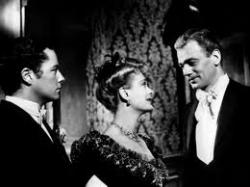 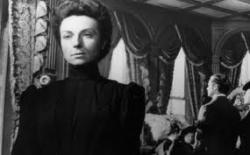 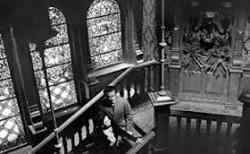 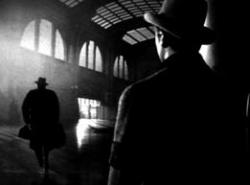