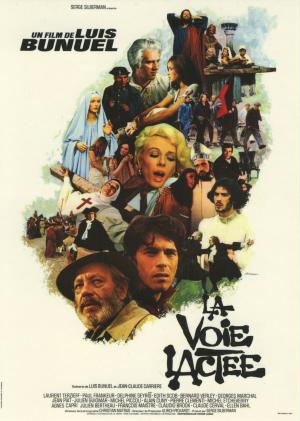 The Milky Way is Bunuel pointing out what Catholics actually believe or at least are required to believe to qualify as Catholic. That he does it in a sympathetic way, with love for the characters involved reminds one of the Xtian maxim ‘hate the sin not the sinner’, Bunuel turns this on its head as an atheist and we have, hate the ridiculous dogma not the people who fall for it. Using as his framing device two beggars on a pilgrimage to Santiago to gather with thousands of others at the tomb of St James, Bunuel weaves episodes with Jesus and his followers, medieval heretical sects, school children pronouncing anathema on certain heresies, a mad priest ruminating on theodicy and an earnest priest positing that Mary remained a virgin even after giving birth!

The odyssey starts portentously enough with a mysterious black figure rebuking the two travellers in regards to money and whores, suggesting a less than idealistic reality awaits our pilgrims. The film progresses where catholicism and belief are such an integral part of everyday life that anybody is liable to start debating the semantics of dogma at the drop of a hat. Bunuel is shrewd enough to not make the catholic characters too broad and ridiculous, realising that it’s enough to outline the dogma as written to have them hoist on their own petard.

The intricacies of Catholic traditions such as purgatory and transubstantiation might elude the non-Catholic viewer, but Bunuel assumes a certain level of knowledge. Purgatory is condemned by a character as non biblical, which it is… it was essentially a middle ages construct to raise revenue by holding to ransom the souls of the dead ie, the living relatives would pay to have prayers said by a cleric to ensure the deceased would be moved out of the limbo of purgatory and into heaven. The practice was taken ‘off the books’ in 2008! I’m sure Luis is relieved! Equally the subtleties of transubstantiation even elude long time believers… a couple I know are Polish Catholics in their mid-50s and were startled to find out (and had to confirm it with their Priest) when I informed them it meant the wafer they swallowed at Holy Communion was the ACTUAL, not symbolic, body of Jesus Christ, and that the wine was actually his blood, so no longer wafer and wine, due to the mystery of the Eucharist. Imagine their surprise to discover their cannibalistic habits of a lifetime.

This is meat (pun intended) for Bunuel’s satire. The fact that he places a written explanation on screen at the end of the film attesting to the fact that every statement is grounded in written catholic dogma is proof that most catholics don’t really know what they are signing up for. Bunuel understood that belief is a matter of culture and accidents of history primarily, and that the actual strict dogmas are mostly barking mad. It’s no accident that the statement appears just after Jesus speaks the words.. ‘I have come not to bring peace, but to bring the sword, to set brother against father etc’…. this alleged utterance still has Xtians twisting themselves to extricate followers from its consequences.

Wry jokes are found at every turn, Two trinitarian heretics are joined in locked rooms by imaginary friends, surely Luis saying if you have one in the sky, why not one in your room? and the kicker is the pilgrims make it to Santiago to find the St James tomb is a fraud, like the Shroud of Turin, so their pilgrimage is based on a lie, again all historical fact.

Film-wise its technically unfussy and direct. Its look is vibrant and the performances are fine, from quite a large ensemble, but they are functional when all is said and done, not a key element when for Bunuel the message is the message is the message, deliver it and don’t get in the way. An atheist missive that never mentions unbelief? it doesn’t have to. A character states reason will only set him against the church, and that belief is from the heart not the head. This is the kind of soft headed argument that let the church go unchallenged for centuries. Bunuel is calling them to account in the age of reason. What he would have made of the advances in quantum science that have rendered first cause arguments redundant is not known, but I’m sure he’d be happy. 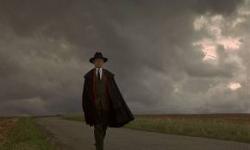 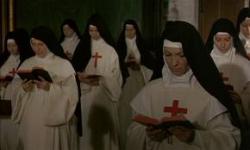