And here's to you, Miss Anne Bancroft...

'I don't believe in being fashionable. Try to be and you're usually out of date before you start.'
~ Jack Clayton

British director Jack Clayton had the world at his feet when he made The Pumpkin Eater in 1964. He’d worked his way up over two decades from Tea Boy to feature film director and was Oscar nominated with his first feature, Room At The Top, in 1959. The notoriously fussy Clayton followed up with The Innocents, a certified classic that failed to set the box office aflame but affirmed he was an artist of the first rank. He pulled together an A-list team for his third, a taut adaptation of Penelope Mortimer’s novel The Pumpkin Eater, by no less than Harold Pinter. It was delicately scored by French maestro Georges Delerue, shot by Oswald Morris with a touch of Nouvelle Vogue in the framing, and starred Anne Bancroft and Peter Finch.

Jo Armitage (Anne Bancroft) is a middle-class woman at a crossroads, pondering her place in a world where her worth is seemingly diminishing, even as her priapic husband Jake’s (Peter Finch) is rampant. Jo has previously found joy in being a mother and wife, but as she discovers the depths of her husband’s infidelities she spirals into an existential crisis. Jake is a screenwriter, working his way up the slippery showbiz ziggurat, trying to provide for his wife and ever-increasing children. The pair share a rollercoaster of emotions as they try to repair the damaged relationship with varying degrees of success.

Clayton opens on a middle-class cliché, a wide shot of a nice car parked in front of a nice London terrace, framed like a bank advertisement, but as we drill in via a series of camera movements, we can see an impossibly sad woman in the window, who has been there all along. The subtle Delerue score superbly complements the visuals and adds the right amount of pathos and mystery for what is to come. It is a low key, bravura opening from a director not in a hurry to cut away from the truth on show. It also establishes the central focus of the film, Anne Bancroft’s face and beguiling beauty, another kind of window that allows us access to Jo’s conflicted heart and mind.

Within the first few minutes Clayton allows Bancroft to effortlessly show the depth of Jo’s humanity, from depressed but doe-eyed and well-dressed, social prize to beaming earth mother of an indistinct number of young children. A flashback poses the immediate question of how she went from the earlier blissful state to the incongruous other, and Clayton shows the journey in vivisection. Jake moves quickly between bewitched and bothered and arrives at bewildered, where he seems to get stuck too often. It is only his continuing love for Jo, and hers for him, that keeps them both trying to work things out. Unfortunately, in this male dominated society, Jo is ‘managed’ by her ‘betters’ i.e., professional older men who know what’s best for her. In reality, that means at various points she’s subject to a stint in a sanatorium, psychotherapy and an abortion.

The film is something of a sombre tone poem of a marriage under duress, and the strains placed on a woman in a patriarchal, pre-contraceptive pill society. The dilemma may seem quaint in an era where western women largely have control over their reproduction choices and 3rd Wave Feminism has made many hard-won gains against the patriarchy. The men in Jo’s life, in trying to get to terms with her ‘condition’ put it down to her constantly getting pregnant - ‘All she wants to do is sit in a corner and give birth’ is Jake’s cloth-eared lament. The irony that they’ve created a culture where women indicate their worth by desirability, where good grooming and maintenance is essential (and an industry), and then they signify success by wedding rings, children and good housekeeping. Jo interacts with the beauty business in a startling scene where she sits next to a woman who recognises her from a magazine article. The slightly unhinged woman is deathlessly played by Yootha Booth, and to those of us who remember her as Mildred in George and Mildred, the naff brit sitcom from the 1970s, it comes as a delightful shock. Clayton then holds on Bancroft’s pained reaction until he has, with her beautiful face in close up, conjured an unforgettable image of pain and confusion that evokes a Kabuki stick mask face under a hair dryer. It is a devastating moment.

As if to underline the extent of the failure of Jo to live up to her fairy tale existence, we are given her nervous breakdown scene in Harrods, ‘of all places.’ Jo wanders around in a daze and Clayton blurs the visuals so that we can’t easily determine a mannequin from a customer. Jo walks through a consumer land of plenty, a white-goods paradise, but she is accompanied by a taut Delerue soundtrack that includes piano tuning dissonance as the climax builds. Jo is treated as ‘damaged goods’ from that point on as the ‘well meaning’ men try to map her a path back from the dark part of the woods.

The film is political inasmuch as it subtly examines fertility in a male dominated society. Contraception, unfairly, usually fell to the woman, as did the results, which always left the women holding the babies. What part of Jo was happy to sign up to the tacit compact of being a baby making machine and what part of her craved a greater freedom from the consequences of this natural act, and of falling in love? Unsurprisingly, the piece supplies no easy answer.

The film is superbly cast, and wonderful performances abound, Peter Finch is very fine as Jake, a solid, flawed man who struggles to adapt to living in constant, quasi-St Trinian’s chaos, a household cacophony of sound and movement. Finch, a stage actor in Australia before he became a film star, brings an intelligent and natural masculinity to his role. Jake takes the easy way out and invests in affairs he lies about, notably with Maggie Smith’s daffy Philpot, and the actress wife of the oily Bob Conway (James Mason). Mason is great as the cuckolded Bob, in a small, thankless and ugly role that nonetheless adds much to the emotional tone of the piece, and the scene with Bancroft at a zoo, where Bob reads a letter to Jo, is brutal. Mason’s is a very brave and effective cameo. There is also a very Pinter-esque moment when Jo receives a blessing from the ‘King of Israel,’ a black beggar. It’s a nice tongue in cheek, mystical-meets-reality aside.

For all the artistry and brilliance of Clayton, the film belongs to Anne Bancroft. It is simply one of the most delicately and beautifully composed characterisations ever committed to celluloid. Bancroft’s performance of a woman in existential crisis deserves to be mentioned in the first sentence of any conversation regarding the great screen acting triumphs, it’s breathtaking, and how it didn’t win an Oscar for her is a scandal. Clayton supports her superbly as she navigates the shores of this conflicted and complex woman and he never cheats us, he holds on her reactions, her pain, her struggle and we feel every bit of the journey as she fights to find her identity and her true self. Once seen, never forgotten.

It’s apparent Bancroft was a serious artist, she trained at the Actor’s Studio, signed to Columbia for the standard 7-year deal, where she’d worked her way through some indistinct programmers but was always watchable and effective, particularly in Nightfall in 1957. She spent most of her early years in theatre until her breakout screen role a decade later, in The Miracle Worker, where she’d was recognised far and wide for her work, including a deserved Best Actress Oscar. She won the Golden Globe, Cannes and British Academy Award for The Pumpkin Eater, so the Oscar snub seems a churlish, ‘you’ve already won yours, it’s someone else’s turn’ type deal.  Sorry Julie Andrews. Bancroft would establish herself further with her era defining role as Mrs. Robinson in Mike Nichols satire, The Graduate.

The Pumpkin Eater is one of the great British films of any era, let alone the 1960s and it’s a mystery to me why it isn’t better known and more widely praised. Jack Clayton didn’t go on to fulfil the promise of his first three films, but if he’d done a Jean Vigo or Nick Drake and died young after creating a small body of masterpieces, then we’d be speaking his name in reverent, hushed tones. See this film however, and shout Anne Bancroft’s name from the rooftops! De, d’ dee de dee… And here’s to you Miss Anne Bancroft… 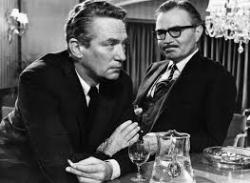