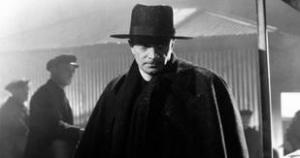 The Spy In Black

Powell and Pressburger join up

Michael Powell had impressed UK cinema giant Alexander Korda with his deeply personal The Edge of the World in the late ‘30’s, enough to be offered a contract with Korda’s London Films. Powell delayed moving to America, having told Korda he had a ticket to Hollywood and no longer believed in the British film industry. Powell, needing some financial stability in his life however, took a one year contract, delightedly writing in his autobiography years later, “I was a Denham man”. Immediately Powell did scouting work for Korda in Burma for a prospective film called Burmese Silver and was devastated when Korda decided the European political climate called for a different kind of film, and he was put to work on a thriller called The Spy in Black.

The novel by Storer Clouston was an instance where Powell thought the only thing worth keeping was the title, and in Emeric Pressburger he found a key collaborator in his plan, and one who had independently and completely re-written the plot. The pair intended to make maximum use of the contract stars Korda forced upon them, Conrad Viedt and Valerie Hobson, and bolstered the parts accordingly. Pressburger concocted a potent tale of intrigue and sex, and the hitherto unenthusiastic male lead, Conrad Viedt, was won over by the inventiveness and respectful manner of the pair. For their part both Powell and Pressburger viewed Viedt as a legend of European cinema, a huge star in Germany for many years who turned his back on the Nazi’s, much to Goebbel’s chagrin, and settled in England. Valerie Hobson turned out to be the quintessential Powell woman, drop dead beautiful with spark and verve and an independent, modern spirit.

In 1917, a war weary U-boat commander, Captain Hardt (Conrad Viedt), is given orders to engage in some work as a spy in the centre of the British fleet’s northern base in Scotland, at Scapa Flow. Hardt lands and takes shelter at the local schoolhouse with the Schoolmistress, a German spy called Ann (Valerie Hobson). Ann has struck up a relationship with a traitorous British officer, Lt Ashington (Sebastian Shaw), and the pair negotiates the securing of the secret plans for British fleet movements. Hardt is immediately attracted to the feisty Ann, and is simultaneously appalled by the fact she has to endure the drunken attentions of her treacherous, and apparently gormless, British lover

The Spy in Black is full of style and witty moments, courtesy of Pressburger’s razor sharp script and Powell’s visual acumen. The pair had served long apprenticeships on either sides of the channel, the Jewish Pressburger having been a highly paid screenwriter at UFA, the German production giant, before fleeing from the Nazi’s, and Powell having slowly gained his wings via the competitive ‘quota quickies’ programme fillers, a kind of cinematic ‘penny dreadful’, churned out to fill local quota’s during the 1930’s.  The Spy in Black owes much to the successful model Alfred Hitchcock had worked up with his superb thrillers, The 39 Steps and The Lady Vanishes, both with winning mixes of intrigue and sex.  Michael Powell, having an eye for the ladies as much as for the camera, created a series of strong and memorable women on screen, and Hobson’s Ann remains of the best.

Valerie Hobson very much fitted the ideal Powell woman, and Pressburger’s canny script gave her a wide range of emotions to explore as her character seemingly takes the Mata Hari like dimensions of her work in her stride. Viedt’s Captain is impressed by a woman so devoted to her country that she’s able to sleep with the enemy and he coverts her affections, complicating the mission into the bargain. Powell elicits a lot of sympathy for Hardt, showing him to be a decent man, dedicated to his job and country, capable of small gestures of kindness and full of spark and humour. If this humanist dimension was possible in 1939, with England once more on the brink of war with Germany, it soon drew official condemnation when the Archers took the same approach in war time in The Life and Death of Colonel Blimp, showing a sympathetic portrait of a German, and earning Churchill’s ire.

Viedt turned in a capable and dimensional performance, and manages to make the villain heroic, which adds to the conflict Ann goes through. Sebastian Shaw does well in a role that also had a lot of ground to cover, but the film works so well because of the central relationship between Hardt and Ann, a nice balance of sexual attraction and professional distance. It’s summed up in a priceless moment that involves Ann locking Hardt in his room each night, with both characters quietly cursing the key, a subtlety long lost in the art of making movies, where a glance or a look had to convey so much.

Powell and Pressburger got on so well they soon formed their own production company, The Archers, and one of the first assignments was to re-team Viedt and Hobson in another spy yarn, the cracking Contraband in 1940. The Archers went from strength to strength, and became the most significant filmmakers in England during the war, after Hitchcock relocated to America. The Spy in Black is a sharp and beautifully made thriller, one that stands up well after all these years, and a must see for fans of P&P. 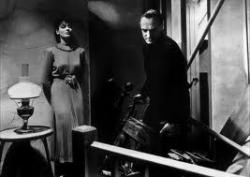 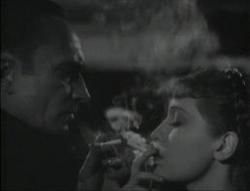 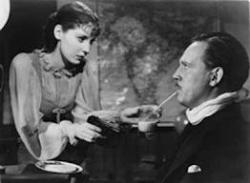 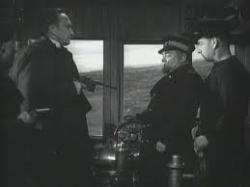