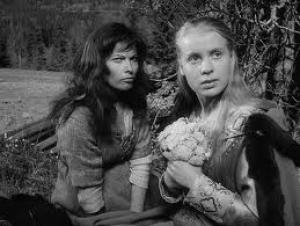 Ingmar Bergman, who'd broken out of Swedish only success to a wider European audience with 'Smiles of a Summer Night' and with 'The Seventh Seal' in the late 50's, was on a streak by the time he made 'The Virgin Spring' in 1960. The film would win him the first of his three Best Foreign Film Academy Awards, and remains one of the high points in a remarkable legacy of cinema. Bergman had wanted to make the story for several years, based on a folk ballad telling of a crime against a young maiden in a medieval Sweden busy throwing off the old Norse gods in favour of a Christian one. Bergman reunited with the cinematographer of his earlier 'Sawdust and Tinsel', Sven Nykvist, and they would continue to work together on most of Bergman's subsequent films. Ulla Isaksson, a noted novelist was commissioned by Bergman to write the screenplay from the source ballad, and Bergman cast Max Von Sydow as the patriarch of the family involved in the tragic events.

Ingeri (Gunnel Lindblom), a dark haired and heavily pregnant peasant girl is invoking the spirit of Norse god Odin in her early morning ritual as she prepares the kitchen of a large farmhouse. Ingeri's prayer is immediately counterpointed against the Christian prayers of the master and mistress of the property, Töre (Max Von Sydow) and Märeta (Birgitta Valberg). Their daughter Karin (Birgitta Pettersson) sleeps in, and Märeta wakes her and prepares her for her dutiful task, to take holy candles to the Church for mass. She needs to travel through the woods and Ingeri travels with her for company, but the pair separate after encountering an old pagan mystic who dwells across a bridge. Karin runs across three herdsmen who she naively agrees to share her meal with, but after eating they brutally rape and kill her. Unbeknownst to the herdsman Ingeri has caught up and is watching from the trees. The herdsman travel to Töre's farmhouse, and seek shelter, not knowing he is their victim's father. The herdsman unwittingly give themselves away and  Töre rejects his Saviour's 'turn the other cheek' philosophy, in favour of a more violent form of vengeance.

'The Virgin Spring' is Bergman's essay on theodicy, or the problem of evil as understood in the context of religion. The evil event that befalls Karin has to be incorporated into Töre's thinking, and he struggles with the idea that a Christian and loving God could desire such an act. Märeta's Christian faith is deeper than that of her husband's, she's seen inflicting pain on her own skin as a mark of piety, while he seems to be flippant with his devotions. Märeta prays that "no danger befall us this day", as Ingeri was simultaneously asking Odin to harm Karin. In Töre's utilitarian world this would bestow more power on Odin, and it would make sense to fall back into worshipping him rather than the Christian god, after all, that's how Jahweh won over the Jewish people, by defeating Baal, his rival God in a contest. "You allowed it to happen", Töre says in his moment of torment, cursing the silent heaven, a feature of all of Bergman's 'silence of God' trilogy films. Töre rejects the notion of forgiveness, and extracts a supreme price from the villains.

Töre understands that the Christian God is one who requires great edifices and temples, and he resolves to build a magnificent stone church on the spot where his daughter was violated. Bergman contrasts the Xtian 'edifice complex' with the natural laws of the pagan and Norse gods, beginning the piece with Ingari breathing life through fire, and ending it with the titular spring. In between the environment is shown to be dominated by the natural world, and he underscores the morality fable with a natural arc that mirrors it's progress, "The day started beautifully but ended miserably" is Märeta's comment at the dinner table before she's aprised of her daughter's fate. Töre prepares himself for battle with a decidely un-Christian sauna based ritual, fighting against nature to uproot the birch tree, and the suggestion that he may be the father of Ingari's child cannot be escaped as she helps him clean his naked body. For all of Töre's ambitions to build a magnificent church on the location of the crime, it's nature that has the last word by unexpectedly providing a more powerful tribute than any one man can offer.

Bergman paces and frames the story brilliantly, as it moves gracefully and eloquently to it's allegorical denouement. Bergman shows two sides of the same coin, light and dark, even colouring the young girls to suit the morality fable, the dark Ingeri and the uber-blonde Karin. Karin's innocence is tempered by her haughty and spoilt nature, and as an only child the force of the grief of her mother is multiplied tenfold. The filming of the rape is graphic for the time, leading to the film being banned in some territories and even to a notorious court case in Texas, (the ban was upheld) an indictment on the sensibilities of those who could not see it's power and worth. The acting ensemble is uniformly excellent, but Von Sydow continued his ascent as a major international actor. Bergman's choice to film his crisis of faith moment in long shot and from behind was a bold one, but with Von Sydow's physicality it pays off handsomely, and more is revealed by what we do not see instead of what we do.

'The Virgin Spring' confirmed Ingmar Bergman as one of the great directors of world cinema, and he would continue to create meaningful and thoughtful cinema throughout the 1960's and beyond. In the following three years after 'The Virgin Spring' he would deliver his seminal 'silence of God' trilogy, 'Through a Glass Darkly', 'Winter Light' and 'The Silence'. 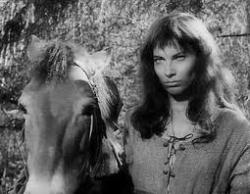 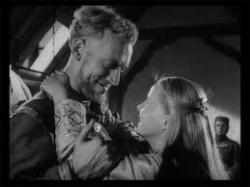 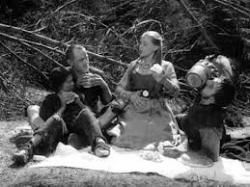 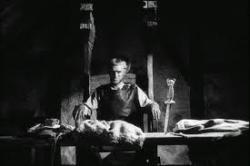