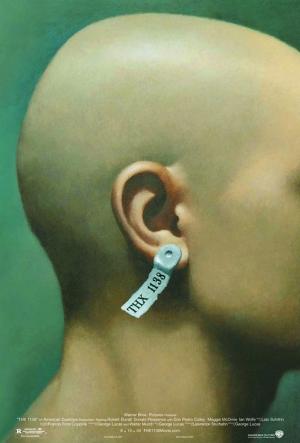 The incredibly fertile period of the American Renaissance threw up very few Sci-Fi films, but in THX1138  George Lucas provided the genre with one certified classic at least. Lucas wrote the screenplay with noted editor and Francis Ford Coppola collaborator Walter Murch, expanding on a student short film idea he worked on a couple of years before. The film produced by Coppola and Lucas’ co-founded American Zoetrope studio, a studio that was more on the creative cutting edge than would be associated with the modern idea of Lucas, and Lucas broke away a couple of years later and formed the more commercially minded Lucasfilms. The film was edited by Lucas, incredible when you consider Murch went on to win editing awards, and the job on THX1138  is itself so assured and confident it’s a shame Lucas didn’t get acknowledgement for this outstanding achievement.

Lucas shows a short excerpt from the ‘40s serial "Buck Rogers in the 25th Century"  which shows a future of action and adventure. After the title sequence he cuts to a very different future, where the population opens a talking pill cabinet in their dwelling to be met with a question, "what’s wrong"?  Not so much Big Brother, as Big Doctor. In this dystopian future we find an anemic and sterile world populated by sedated and emotionless people who are policed by faceless police robots. THX (Robert Duvall) is a robotics worker, controlling a part of the construction of the android officer’s, inserting isotopic power cores. THX shares an apartment with LUN (Maggie McOmie), a female  who works in the surveillance operations section of the city, keeping an eye on drug use and illegal sexual activity.

The magnificent and much overlooked Donald Pleasance plays another surveillance officer SEN, and he gets suspicious of the activity of LUN, who stops taking her meds, and secretly substitutes THX’s medication for placebo’s. Soon THX is feeling different, clear headed and experiencing emotions he hasn’t had before. He becomes more sexual towards LUN, and they engage in illegal sexual intercourse. LUN convinces the conflicted THX that they can break out of the regimentation and move to a new and freer area of the city, but SEN has LUN’s shift changed and her dwelling arrangement reassigned. THX however has reported SEN for illegally altering LUN’s shift and soon both men are arrested and in a prison area of the city. THX is tried and found ‘incurable’ and is sent for re-programming ‘treatment’ by the android police. In recovery THX has a brief re-union with LUN, who is pregnant, and they make love again. LUN is taken away and soon THX and SEN are joined by SRT, another recalcitrant and all three make an escape attempt.

SEN splits away from the other two and finds the original portrait of the religious icon that is beamed into various ‘confession-psychotherapy’ stations that populate the city. he soon ends up captured and is led away. THX uses a computer grid to try to find LUN, but it seems she has been disposed of and her identity given to a foetus.  SRT dies in an escape with a fast car, but THX continues to evade capture. The android police get close to catching THX, but as the pursuit becomes too costly and runs over budget it’s called off. THX emerges into the world above the city.

As an examination of a media dominated, consumerist culture (‘buy more now’) THX1138  is an incredibly prescient affair. Lucas instinctively links sex and death and our fascination with viewing other’s lives, something that ‘reality’ TV takes for granted in the 21st Century. The idea of a totalitarian regime controlling and ‘seeing’ every aspect of the inhabitant’s existence is not a new one, but Lucas invests the idea with menace and at the same time indicates the banal and pervasive nature of 24 hour surveillance. It has to be said he includes religion in the deal, where the idea of eternal surveillance by an unseeing eye probably emanated from in the first place, and here it lines up with Marx’s ‘opiate of the masses’ variant, keeping the population pliant and unquestioning. Made during the Nixon administration it’s a pre-cursor to Coppola’s own The Conversation, a film that would address the same issues of paranoia and betrayal that THX1138  touches on allegorically.

THX1138  is almost avant-garde in comparison to the rest of Lucas’ output, so it serves as a reminder of the level of intellectual capacity he had when he started, and makes one wonder how the lurch towards commerciality could have been so complete? THX1138  does however remain as his one grown-up masterpiece.