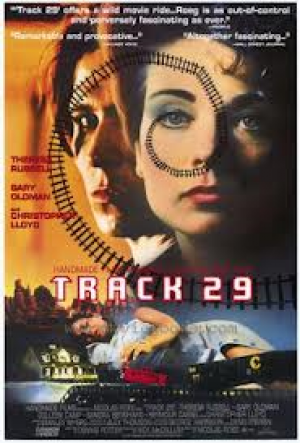 Following the success of his ground breaking ‘Pennies From Heaven’, ace British TV playwright Dennis Potter spent several years in the 1980’s attempting to crack the American market until the commercial failure of his final Hollywood project, ‘Track 29’, directed by fellow Brit maverick Nicholas Roeg, saw him retreat to the UK. Potter adapted an earlier piece, ‘Schmoedipus’ from 1974, transplanting the location from London to North Carolina, and George Harrison’s Handmade Films provided the finance for what should have been a marriage made in heaven between the writer and director. Roeg seemed to have lost his way in the 1980’s, after a stellar run with ‘Performance’, ‘Walkabout’, ‘Don’t Look Now’, ‘The Man Who Fell to Earth’ and ‘Bad Timing’ the latter with future wife Theresa Russell, ‘Track 29’ offered a return to form.

Linda (Theresa Russell) is trapped in a loveless marriage to her Doctor husband Henry (Christopher Lloyd), frustrated by his inattention to her and his obsession with his model train collection. Linda’s middle class world is full of the suburban superficialities of trips to the mall and exercise classes with her girlfriend, but her routine is interrupted by a visit from a mysterious younger man, Martin (Gary Oldman). Henry carries on an affair with his nurse (Sandra Bernhard) and gives the key-note speech at a model train convention. Martin soon claims to be the son Linda gave up for adoption many years earlier, and Linda struggles to accommodate the information into her miserable life.

Potters trenchant satires are mostly associated with sexual mores and the British class system, so setting the action in America superficially subverts one half of the equation and has the effect of distilling his points to the personal and intimate. Linda is driven to the point of madness by the ennui and frustration of her stilted suburban prison, where her gaoler is a thoughtless, narcissistic husband and her compound an apathetic community. Potter is the master of analysing the nexus of betrayal between promise and delivery, with a heavy side dose of sex, and in this case it’s Linda’s expectations of the dreams of the everyday housewife, and their distance from reality. Henry’s betrayal is underscored by the betrayal of society in removing her baby from her after she’d given birth to Martin as a teenager.

In Australia, at least, in the 1960’s it was sadly still common for the state to remove newborns from their ‘fallen’ teen mothers and adopt them out, never to be seen again by their parent and I assume the practise was common in the UK as well. The Australian Prime Minister, Julia Gillard, issued a government apology for the misguided practice in 2013, acknowledging the hurt and damage the undeclared policy wrought on both the mothers and their children. Potter aligns his examination of sanity with the betrayal of the state in stealing the childhood of the victim, and Roeg bookends the piece with John Lennon’s anguished ‘Mother’ opening the film, and Gary Oldman screaming ‘mummy’ at the end.

Linda’s child turns out to be the product of a sexual assault, and the memory of the event collides with her present unhappiness and produces a welter of confusion between past and current events. Potter, himself a victim of sexual abuse as a young boy, fills his subtext with the extent to which the sexual wiring of the victims precludes ‘normal’ sexual behaviour (whatever that is). Linda’s ability to distinguish reality and fantasy declines as she builds a scenario in which Martin becomes a symbol for everything wrong with her life. The overtones of the Oedipal myth, the sexual tension between mother and son and Potter’s fractured narrative provides the appropriate framework for Roeg’s disjointed visual approach, creating a permanent sense that everything is slightly off kilter, resulting in a wonderfully surreal satire.

Theresa Russell does well in the central role of Linda, creating a women/child who is conflicted at every level, not just sexually, as she tacitly questions the emptiness of the American dream. Christopher Lloyd makes great comic play with his obsessed Doctor, his preacher level delivery of the convention keynote speech a highlight. Gary Oldman indicated the great promise he’d shown with ‘Sid and Nancy’ and ‘Prick Up Your Ears’ would continue and eventually result in a sustained and fine career on both sides of the Atlantic.

Nicholas Roeg seemed to go into a creative permanent decline after ‘Track 29’, and only produced a further 5 films in the next 25 years, and will forever be associated with the glory days of the ‘70’s. Dennis Potter returned to UK television and to some energetic and urgent work in the longer form series format. Having created the high water mark for excellence with his 1986 work, ‘The Singing Detective’, he made some worthy subsequent entries in ‘Blackeyes’, ‘Lipstick on your Collar’, ‘Cold Lazarus’ and ‘Karaoke’, before succumbing  in 1994 to a cancer he’d blackly named Rupert after the media tycoon he hated, Rupert Murdoch. ‘Track 29’ remains a fascinating and interesting piece, if not the finest work of both writer and director, it’s definitely worth a look if your cup of tea is laced with bite and acid. 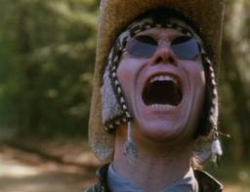 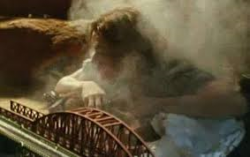 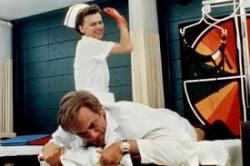 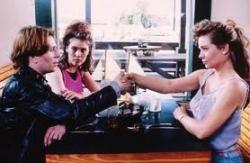 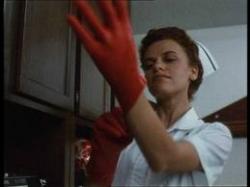