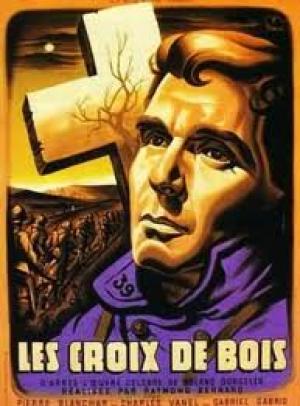 'Wooden Crosses' is an important and significant film. It ranks with Kubricks ‘Paths Of Glory’, Losey’s ‘King and Country’ and Peter Weirs ‘Gallipolli’ as one of the most profound examinations of the madness of the Great War. Like those film's it focuses on the foot soldiers who bore the brunt of the conditions, and here Bernard keeps it simple and effective by staying with a small company and the situations they face together. Like it’s similarly themed German counterpart, ‘All Quiet On The Western Front’, this is the story of a fresh faced young man new to the front. Demarchy (Pierre Blanchard) joins the battle hardened veterans and is soon moved from a quiet section behind the lines, where they are enjoying some much needed recovery time to a frontline trench that is having an explosives mine dug underneath by the Germans. The pressure, not surprisingly, is too much for some, and the men's lot is to share the trenches with tension and death.

The film is based on the autobiography of Roland Dorgeles, a foot soldier from the Great War. The film avoids the wider political context of the conflict, perhaps assuming knowledge amongst it's audience, who would have mostly lived through it, but for those who do not know the war was essentially an Imperial pissing contest between the Royal houses of Europe. To add insult to injury the Royals were all first cousins, and the loss of millions was the direct result of the vanity and Imperial ambitions of an in-bred and inept ruling class. The military was complicit (quelle surprise) in that the Generals of the First World War on both German and French sides, were the young corporals of the 1870 Franco-German spat that saw the birth of Modern Germany, and they had been agitating for a square up for years. Barbara Tuchman's Pulitzer Prize winning 'August 1914' is essential reading for the build up to war.

By distilling the scenario to the experiences of the men in the trenches Bernard elevates the humanity of those involved, both survivors and victims. The irony of a running battle that culminates with the death of the well-respected sergeant in a cemetery is just one of the insightful vignettes Bernard captures. His death speech is remarkable in it’s candour and honesty, no trite sentiment here. A Church where they pause for worship has a mass conducted on one side and horrific injuries being treated on the other, religion seems hopelessly ineffective when faced with this human calamity.

The soldiers know that the generals may see military glory and honour in winning a Croix De Guerre, but the only cross they are likely to win is a wooden one. The reality of the Western front is something the French people still live with, ploughed fields are still yielding metal that typically took a million shells in a weeklong artillery bombardment, prior to a mad dash across no man's land. Fully one third of the British shells were reportedly duds. Futile infantry charges are mounted, gains of hundreds of yards are measured in thousands of dead and wounded. The shame of the generals and politicians is not only that they employed these Napoleonic era tactics, but that they held on to them for so long in spite of the evidence that they were failing completely. The advances made by the industrial revolution and it's concomitant killing power improvements were not incorporated into the military tacticians thinking, and the mad generals continued to spend human lives like confetti, never admitting their lack of embracing an alternative.

The battle scenes are incredibly vibrant and convincing; it seemed that those involved wanted to tell how it was so that future generations would understand. Bernard not only went back to the actual locations, some 13 years after the war had ended, but used many veterans in his re-staging of the grinding and ultimately futile battles. Raymond Bernard made a film as important as ‘The Grand Illusion’ with ‘Wooden Crosses’, something to sear itself into the heart of humankind, something to remind us of the madness and the losses, something to help stiffen our resolve when the politicians suggest confrontation is the solution and we say, never again. The visual effects in 'Wooden Crosses' are poetic and graceful, and the Criterion DVD presentation of the French restoration is stunning. It's a film for all the ages, and a permanent tribute to the men who fought in such a brutal situation, and an indictment on the generals and politicians that oversaw the madness of trench warfare.

My Great Grandfather was Herbert Henry Worker, a Tasmanian foot soldier, a Corporal in the AIF, he was blown to pieces in a small Battle of the Somme called, The Battle of Mouquet Farm, where 11,000 Australians lost their lives in a futile attempt to take a position from the Germans. The British Generals eventually gave up and went around it. That obscene war had reverberations to the smallest, far-flung corners of the globe, to a young girl in a little town in North East Tasmania, as Herbert was killed in August 1916, and my beautiful Grandmother lost her father. 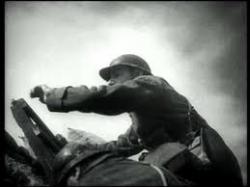 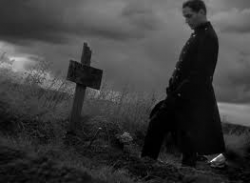 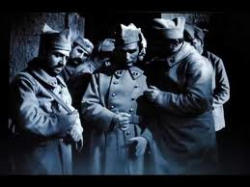 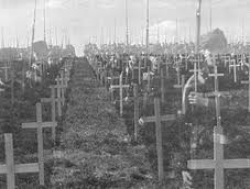