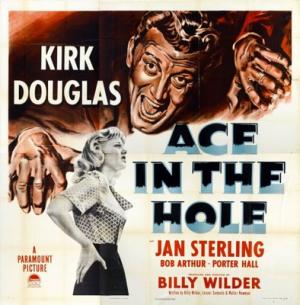 Ace in the Hole

America as seen through the gaze of an immigrant, clear-eyed and cynical. Wilder had revealed the dark heart of his adopted society through some unflinching filmic essays on murder, alcoholism, fame and desperation and would go on to leaven his cynicism with humour in later films, but before the sugar coated poison pills of 'The Apartment', 'The Fortune Cookie' and 'Kiss Me Stupid', he delivers 'Ace In The Hole'. The centre of the film is Kirk Douglas and the manic energy he invests into his performance of Chuck Tatum, a reporter with a small time newspaper, he has delusions of granduer and he's looking for his magic bullet, his ticket out of Palookaville. Douglas doesn't deliver his dialogue as much as spit it, as disgusted with himself it seems as with the rest of the world. Determined to prove himself a somebody, he finds his chance in an unlikely place, at the bottom of a mine shaft in New Mexico, in the form of a simple hearted nobody, Leo Minosa.

Leo is trapped in nthe aptly named 'Mountain of the Seven Vultures' and needs help, and Chuck, who is not going to let this piece of luck die on the vine, is there to see that he doesn't get it, not at least until every last drop has been milked from the story via national syndication, with Chuck as the exclusive conduit for the salivating public. Chuck's partner in this unholy enterprise is none other than Leo's wife, Lorraine, played with glorious indifference by Jan Sterling. Unlike Double Indemnity, where a pretty blonde is the motivation for the male character to pursue a corrupt course, here Chuck is happy to use her for what he can, but his destiny will not be compromised by what's on offer in the bedroom. Chuck bribes and manipulates everything in sight to run the show to suit his singular agenda, he won't give a sucker an even break, not even one with a sweet kisser. Chuck bribes the local sheriff (Ray Teal) to get exclusive access to Leo, and to ensure the spectacle is drawn out as much as possible, the crowds will remember him at election time and his future vote is therefore secure. Chuck convinces Lorraine to hang around, she was leaving a loveless marriage when Leo got trapped, but the business the event will bring in under Chuck's aegis will see her make plenty of money.

Wilder also brings in a complicit public, in the form of the 'Big Carnival' that spontaneously springs up at the foot of the mountain, invading sacred Indian territory in the process but here, apart from the holy dollar, nothing is sacred. Leo is good copy, his pretty and worried wife adds human interest and people, in a growing mass-media age need to be entertained. Wilder manages to  pre-empt the 'news-as-entertainment' bandwagon by 30 odd years. Kazan would tread similar ground a couple of years later with 'Face In The Crowd', an indicator of where a celebritocracy will lead us. Wilder's ending spares no-one, least of all Chuck, who's cynical manipulations come back to haunt him. The moral centre of the film is poor, warm hearted and naive Leo, who endures suffering due to Chuck's endless maneuver's and remains blissfully unaware of his duplicitious wife's betrayal. 'Ace In The Hole' is still a remarkably powerful film, even if 21st centruy ears can vaguely hear Sting singing 'We're sending our love down the well' to Bart Simpson, when the carnival is in full swing!

The entire event plays out like a blockbuster movie, with the cars arranged at the foot of the mountain as if they were at a drive-in show, like Hitchcock and Michael Powell Wilder is commenting on the nature of voyeurism and the fact that the part the film industry plays is a far from neutral one. The film died a commercial death upon it's release, no huge surprise given it seems like a single digit salute to America from a director who'd done well in his adopted country, but tough love is still love, even if it is accompanied with honest and meaningful critiicism. Wilder is also commenting on what occurs when the nature of morbid fascination and media corporatisation intersect, to produce real life suffering as crass entertainment, edifying no-one and diminishing us all. Chuck's final realisation of his own moral failure is rewarded with a kind of ironic fate, Wilder's circus moves on, but the vaguely unsettling stink of the elephant shit lingers. The consumers insatiable appetite for something new is undiminished, no lessons are learned. 'Ace In The Hole' is a noir-ish story transplanted to a dusty regional location, but the hearts are still black and there's no escaping what's within, no matter where you run to. 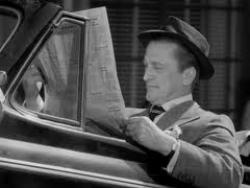 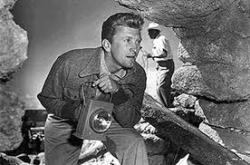 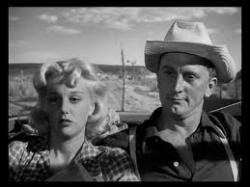 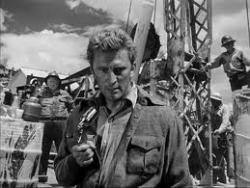 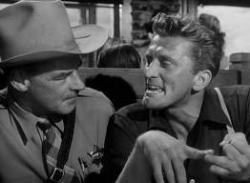