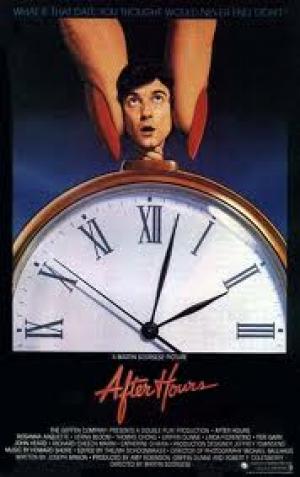 "All my life, I never really felt comfortable anywhere in New York, except maybe in an apartment somewhere". - Martin Scorsese

The mid 1980's saw a marked turn to lower budget American movies after the domination of the post  Jaws,  Star Wars,  Blockbuster cycle and Martin Scorsese fell into line with two 'smaller' films, after failing to get finance for his pet passion, a big screen adaptation of The Last Temptation of Christ.  Scorsese proved his low budget credentials with the wonderful King of Comedy  in '83 and opted to take the directorial reins from Tim Burton on this original screenplay about a fish out of water in Soho. The screenplay was famously written by a student as an assignment for a film course, and owes something to a Joe Frank radio monologue (later the subject of a successful lawsuit), and the brilliant circular ending was added by Michael Powell, who was just about to marry Scorsese's long time editor Thelma Schoonmaker. The cinematographer was Michael Ballhaus, who had settled in the states from Germany, and who would go on to shoot most of Scorsese's films into the 2010's. The fact that Scorsese was an outsider who was simply bringing his skill as a director to the project, freed him up from being too close to the work and for him to rediscover his love of movies, it shows, and it helped the final product become a vibrant and fun expression of New York's darker and quirky side.

Paul Hackett (Griffin Dunne) is a word processor, stuck in a mundane world and bored from listening to the pretentious intellectual yearnings of a trainee, he later goes to a local coffee shop and meets Marcy (Rosanna Arquette) who asks about the book he's reading by Henry Miller. Amused by the antics of the dancing cashier "waiting to be discovered",  Scorsese has already established that there are layers beyond the obvious, and when Paul attempts to write Marcy's number and the pen doesn't work we also get a foreshadowing of an environment not quite supporting Paul's efforts. Paul, who has the 'approved' intellectual credentials (he reads Henry Miller and has a David Hockney print on his wall) calls Marcy later and she invites him to her loft in Soho that she shares with an artist friend, and during Paul's manic taxi ride there his money flies out the window, his is a world coming unstuck bit by bit, and if Paul couldn't pay for his ride in cash, he will pay in other ways. Marcy has issues, things don't go well, and Paul leaves, but getting back uptown proves to be no easy ask in a part of the city that may as well be a foreign country as far as he's concerned.

Scorsese uses some repetitive visual tricks and clever editing to convey the mounting paranoia and sense of claustrophobia Paul feels as this unknown world closes in on him. A series of seemingly unconnected incidents knocks him from one innocuous event that turns bad to another, until he's in serious danger of being lynched by an angry mob. In a Kafkaesque  universe he even has a confrontation with a club doorman that incorporates elements of Kafka's dialogue from 'Before the Law', and the motif of Paul's intellectual 'idea' of art, as a prop or a pose or as a status indicator is hurled back at him by a Soho full of art as life, full of real pain and fear and danger and solace. Paul is in turmoil by the end of the night, desperately wanting to return home, 'I just want to live', he says, and then is himself turned into a work of art. Paul emerges from this cocoon as a new man, he's seen the other side, and Scorsese places him back in his office where it's up to him to invest his life with meaning and purpose from that point.

'After Hours' is a biting satire on the perception of difference. Paul is drawn into a world that is on his doorstep that he has no conception of, all because of an attractive woman he hopes to bed. Paul concludes on little real evidence that Marcy is immediately and unsettlingly 'different' in that she may have been self harming, and the idea that beyond her superficial layer of 'attractive blonde' is a level of pain beyond the obvious. All the women who interact with him soon have layers beyond the obvious in Paul's mind that he interprets as threatening because of the stress he's under, when in actuality they represent a mild quirk or degree of difference he's simply not attuned to processing. Punks, gays, thieves, clubbers, artists and bondage freaks and all take on the hue of 'the other' as Paul searches for a way out of an incrementally nightmarish situation. Scorsese does a fantastic job of ramping up the tension, bit by bit, using the clock metaphor as the action plays out in not much more than real time for most of the film. Ticking gets louder, watches get glanced at, time for Paul is always against him or running out. Scorsese's music choice is again spot on, his instinct for picking the right song for the right scene as peerless as ever. The end tune 'Is That All There Is'? is the perfect existential question mark with which to frame the Kafkaesque nightmare of the yuppie fish out of water in what was then a very un-gentrified and gritty Soho.

The casting is uniformly solid, and Griffin Dunne is great as the put upon protagonist, his energy and resigned fatalism balanced perfectly. The supports are good, notably all the major women parts work a treat, with Catherine O'Hara and Terri Garr particularly memorable. The outsider feel of Soho is superbly created and populated by an authentic array of freaks and straights, giving the film a seamless ambiance with which Scorsese weaves his magic. Scorsese won Best Director at Cannes for the effort and the film also enabled him to consolidate his career and set him on a course that eventually allowed him to complete his dream project on the Christ myth and then to essay the New York gangster world definitively, so from 'Godfellas' to 'Goodfellas' and on to screen legend status from there. After Hours  tends to get overlooked when people review Scorsese's body of work, but it's a little gem of a film and holds much to recommend it. 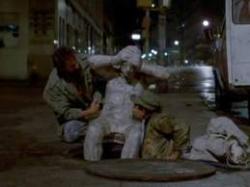