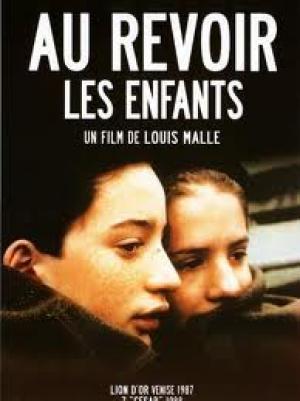 " Who was rounding up the Jews? Local people, often. In France they were rounding them up faster than the Nazis could handle them".
- Noam Chomsky

In the mid '80's, removed from the country of his birth for many years, Louis Malle reflected on one of the pivotal episodes of his childhood of 40 years prior, the time he spent in a Catholic boarding school that was hiding young Jewish boys from the Nazi's in provincial France during the occupation. As befitting his most personal film, Malle wrote and produced it as well, casting a couple of excellent young boys as the leads, Gaspard Manesse as Julien Quentin, the Malle surrogate, and Raphaël Fejtö as Jean, his Jewish friend. Malle had handled young actors before, notably with Lacombe Lucien, Murmur of the Heart  and Pretty Baby,  always able to extract fine performances from them, and in doing so he fits into a long French tradition that stretches back at least to Jean Vigo's  Zéro de conduite  in 1933.

Malle starts the action at a train station, with students leaving their parents and going back to provincial boarding school, amongst them the tearful goodbye's of Julien and his mother Mme Quinten (Francine Racette). Malle again suggests (as he did in 'Murmur of the heart') in the link between the attractive mother and son, a sexual awakening from the boy in his insistence on staying, and a playfulness on the part of the mother in responding to what she knows is the product of hormones and of nature taking it's course. Nazi soldiers flitter by in the background on the station, adding a sense of subtle dread to the proceedings. At school Julien adopts a tough kid exterior, bluster to help cover up the fact he's still wetting the bed. The boys play 'pretend' Nazi's in games involving confiscating  personal goodies like jam, showing it didn't take long for this faux fascist behaviour to filter down to the playground.

A new boy arrives, Jean, and is given the traditional Catholic schoolboy welcome, that is to say ridicule and humiliation. Julien at first goes along with the crowd but soon rejects this approach and bonds with Jean in other ways, and a friendship develops between the two. There are subtle indications that the new boy is different, he doesn't make the sign of the cross after a prayer at mass, he's awkward with the routine and very accomplished at mathematics and piano. Other ironies are dropped in by Malle, during Mass, where the priest intones seriously, "eat my body, drink my blood", a boy feints from boarding school malnourishment, the blessed sacrament is no nourishment at all? Jean is conspicuously passed over in administering the sacrament later, confirming Julien's suspicions. Julien, during a confession, is asked by the school head master, Père Jean, to look after the new boy, and after Julien discovers Jean's secret he knows why.

Malle constructs the narrative in such a way that Juliens' situation is that of the viewer, as his eyes are slowly opened to what is going on around him, we are equally informed. This adds a layer of suspense onto Malle's unique ability to disperse complex political and personal themes throughout the story. The casual racism of the playground is never far from the surface, "you're a real Jew'" is a retort to a trading game amongst the boys, stereotyping their reputation for business. "They're smarter than us and crucified Jesus"  is the answer Julien gets from his older brother, François, when he asks "what's a Jew"?.  The public baths have a sign 'No Jews Allowed' and the local collaborator who works at the school tells Julien 'Jews and Communists are worse than Germans'. Earlier a German soldier appeared at the school seeking a priest for confession, and Jean and Julien were both saved from an overnight sojourn in the woods by a pair of Nazi's who returned the scared schoolboys safely, "We Bavarians are Catholics too",  said one of the soldiers. This is the background to which Julien must assimilate his friendship with a boy he now knows is Jewish.

The complicity of some levels of Catholic France with the Nazi's anti Semitic agenda is alluded to in several instances, made ironic by the fact it's a Catholic priest trying to help these boys. As a kindness Jean is taken to a restaurant during Julien's mothers visit, and the Vichy militia arrive to harass an elderly Jewish man. "Are we still for Petain"?  François asks, "No one is these days",  replies the vaguely bored mother, as if she's changing fashions with the seasons. The fuss with the old Jewish diner, "Send all the Jews to Moscow" shouts one diner, causes François to berate the 'collaborators', who then turn their gaze onto his table, which includes Jean, the furore is quashed by a Nazi officer, in equal part disgusted by the spineless, collaborating militia but also out to impress the stylish Mme Quentin. "Are we Jews"?  Jean asks his embarrassed mother, who goes on to proclaim that they were not, an that she has nothing against the Jews, "although they can hang that Léon Blum".

* Léon Blum was a moderate socialist who ran the Popular Front leftist coalition governments of France in the late '30's. He was imprisoned by the Nazi's and condemned the Vichy regime, barely escaping the war with his life. The resistance was largely in place in France thanks to those on the left, many on the right were happy to aced to the Fascist policies, and for the most damning and revealing look at life in occupied France I recommend Marcel Ophul's seminal documentary, The Sorrow and the Pity.  So this resistance hero and 3 time President of France would be hanged if it were up to the likes of Mme Quentin.

Malle gives the piece the quality of a tender yet bittersweet reminiscence, infusing the relationships with real warmth and connection. The things that unite Jean and Julien are greater than the things that separate them. Julien, as is Jean, is a boy on the cusp of adulthood, having to accommodate some terrifying realities into his daily life, betrayal and collusion are all around him, as well as the ever present threat of forms of humiliation and violence, physical from the occupiers, and mental from his own peers. The boys struggle with puberty, reading aloud erotic passages from 'The Arabian Nights', a subtle allusion to the beauty the Arab cultures have to offer to a young Jewish or Catholic person. Malle scores the piece with mostly haunting and austere classical pieces, but a shining moment occurs when Jean and Julien are together at the piano when everyone else is in an air raid shelter, and the pair choose to duet, not on Schubert, but on a rocking boogie-woogie jam. The laughter is beautiful and real as the pair consolidate their friendship in a welter of white and black notes.

Malle's ending is as devastating in it's own way as Truffaut's The 400 Blows   famous freeze frame, as Julien confronts a life forever changed by this event. The film is poetic, tender and haunting, and yet never backs away from the horror at the heart of it's concerns, the madness of racially based hatred, and the banal and everyday contexts in which it festers. Au Revoir Les Enfants  was a worthy hit all over the world, and the next to last of Malle's French films. He would only complete three more feature films before dying too young 7 years after this, possibly his greatest cinematic achievement. 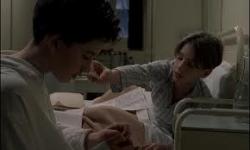 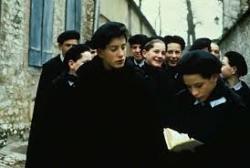 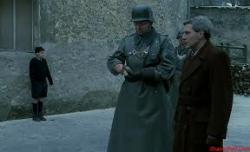 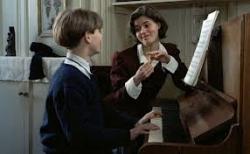 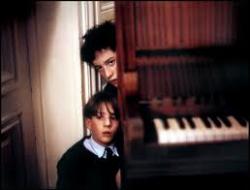 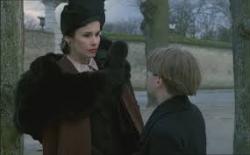 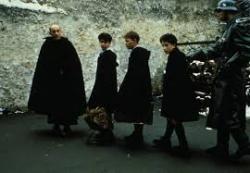